Bullet-proof is the word that comes to mind when you first glimpse Dell’s rugged business notebook – the Latitude E6400 XFR.

Forget about slim and sexy MacBooks or pretty bite-sized netbooks.

If you’re into combat boots and 4X4s, the E6400 XFR (which actually looks like piece cut out from a tank) is the laptop for you. 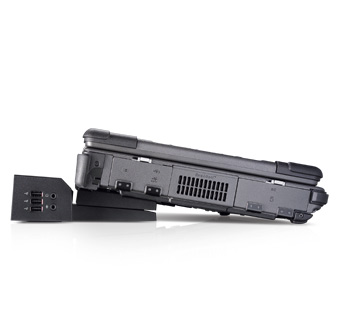 The dark grey, 8.9-lb unit’s chassis is built with PR-481, a polymer hybrid with twice the strength of traditional magnesium alloys.

Dell says this high-strength substance is used for applications such as cryogenics, aircraft components, military equipment and medical devices.

Who needs such a tough laptop?

This tough-as-it-can-get notebook, Dell says, is engineered to withstand a four-feet drop and is sealed from torrential rain, wind gusts of up to 70 miles per hour, and a desert storm.

Bathing the E6400 XFR with a garden hose was the closest I got to recreate a rain forest environment.

I also poured lots of dirt and garden soil on the keyboard and dropped the unit from the prescribed heights with the lid both wide open and shut and kicked it around the floor for good measure. At each test the E6400 XFR refused to die. 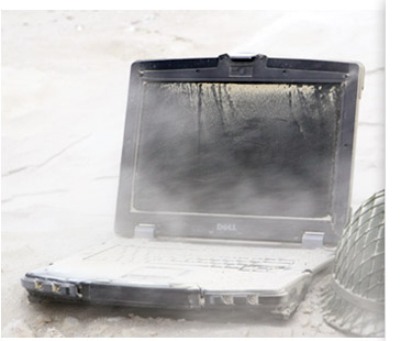 Excluding a couple of chinks in its armour which I will discuss later, I think the E6400 XFR would be an ideal rough-terrain workhorse for many field service professionals in sectors such as oil & gas, utilities, and telecom, rescue or law enforcement or even military and intelligence personnel working in extreme environments.

For workers who travel a lot and need a sturdy notebook that performs reliably in different conditions, the E6400 XFR would be a great option.

And the number of such mobile information workers is steadily growing.

Dell cites a report from the Venture Development Corporation, a Natick, Mass-based market research firm, indicating that the number of mobile workers is expected to exceed 280 million by 2012.

The 2007 study also states that mobile device users lost an average of 75 minutes of productivity each time their device failed.

The average mobile device failed as many as 20 times each year, which translates to about $4,000 in lost revenue per employee, per year.

The laptop supports up to 8GB of RAM and 120GB of hard drive storage or of SSD storage.

It has a fingerprint reader for security.

In my tests, the notebook booted up fast even when running on the notorious memory hog, Windows Vista Business OS.

Boot up took around 20 seconds, getting an Internet connection via WiFi another 40 seconds.

The laptop houses three USB ports, a FireWire port, a multi-media card reader, an ExpressCard slot and an eSATA port. It  is equipped with WWAN, WLAN and Bluetooth wireless technologies.

I found the machine’s 14″ LED non-reflective widescreen exceptionally bright and the screen’s contents were clearly visible even when I worked under direct sunlight.

The E6400 XFR is definitely not a gaming laptop but the Nvidia Quadro graphics card provided crisp images. The onboard Webcam though rendered often flat and sometimes muddled images.

The laptop comes with a standard six-cell battery which Dell says last over five hours. Dell also has a 12-cell battery available.

I managed to get slightly less than four hours out of the system, but I was typing away at a document while listening to music played from the unit’s DVD-ROM, CD-RW/DVD, DVD+/-RW drive and surfing the Net via wireless connection.

Drag, drop and kick it around, the E6400 XFR was definitely built to take abuse. But despite its tough exterior I find the laptop has a few soft spots.

With the E6400 XFR’s heft it’s easy to see that this laptop isn’t designed to be lugged around all day.

Not only is it heavy, but the unit’s tough exterior is guaranteed to give users a few bruises if they are not careful.

Over the course of my tests, the laptop froze frequently. The only way I could continue working was to take out the batteries and then start all over again. (To be fair, the freezing could also have been caused by the operating system or my Internet connection).

And with the “military grade” fittings on the laptop, removing the batteries was never an easy task.

To protect it from the elements, the unit’s battery is encased in a special protective housing, with tabs to that are exceptionally tough to push open. I took to carrying a flat blade screw driver around whenever I used the laptop, just to release the tabs.

My main gripe with the E6400 has to do with the keyboard. The rubber pad over the keys may protect them from dust but made for very imprecise typing.

Often, I would have to strike a key several times to get the character to register.

If I just typed along without looking up at the screen (just as a touch typist might do) my work would be a jumbled piece of prose with words missing letters at various points.

Perhaps this would be ideal for some intelligence operative sending out a coded message but what about an engineer transmitting geographic coordinates?

Luckily, the E6400 XFR comes with two keyboard options. Its standard keyboard is waterproof as well but more receptive.

The two keyboards, however, are not interchangeable by the user.