It might be the “consumer electronics” show, but Dell Inc. appears to be mainly courting business users at CES this year, launching a professional version of its popular XPS 13 consumer laptop, alongside two new 2-in-1 tablets and a monitor that explicitly targets graphics professionals, it announced on Thursday.

The Latitude 13 7000 Series (pictured below), which will be available at Dell’s online store for $1,299 USD on March 8, features a thin, stylish design similar to the XPS 13, in addition to the same thin-bezel screen and purported 10 hours of battery life (which, The Verge notes, has actually lasted for around seven or eight hours in real-world tests).

There are several key differences befitting the Latitude 13’s new audience, however. One is the addition of Type-C USB ports, which will be used for both charging and accessories (though a standard USB port remains available for all of your current needs). Another is the processor: rather than the Intel Core i5 or i7 that powers the XPS 13, the Latitude 13 will be powered by Intel’s new Core M line of processors, up to and including the top-tier Core M7. 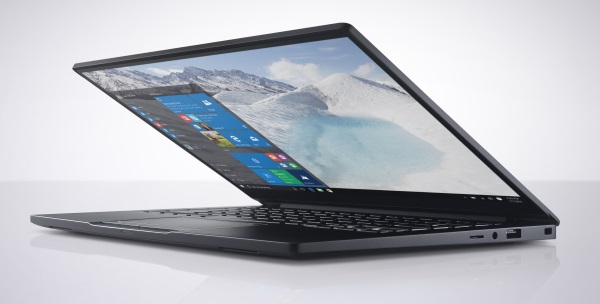 Other enhancements for business users include an optional smartcard reader, a fingerprint reader, an RFID reader, and a keyboard that is more “tactile” than the XP 13’s, according to Dell. Latitude 13 owners will also have the option of choosing between a 1920 x 1080-pixel non-touch display or a 3200 x 1800-pixel touch display.

The Latitude 12 7000 Series (pictured below) and the Latitude 11 5000, both of which will go on sale in early February for $1049 USD and $749 USD respectively, are a pair of 2-in-1 tablets with keyboards that Dell has designed to compete with similar products from HP and Microsoft.

Running on Windows 8 or Windows 10, both tablets are customizable in multiple ways, with the 12.5-inch, eight mm-thick Latitude 12 running on the customer’s choice of an Intel Core M3, M5, or M7 processor with up to 8GB of RAM, and a screen that can either be full HD or 4K UHD. The Latitude 12 also includes two Type-C USB ports, an SD card reader, a micro SIM slot, up to 512 GB of SSD storage, a 5-megapixel camera in front, and an 8-megapixel camera in back. The tablet connects to the keyboard using magnets, and can be connected to a docking station. 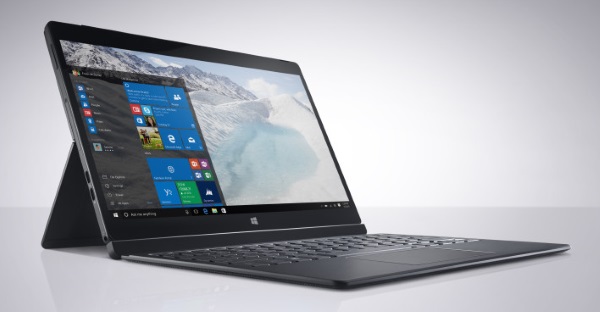 The lower-end Latitude 11 5000, meanwhile, features an 11-inch full HD screen and only one Type-C USB port, though it can be customized with Core M3 or M5 processors. It also features a USB 3.0 port, a micro HDMI port, a micro SIM slot, and an SD card reader.

But Dell’s biggest showstopper by far at this year’s CES has been its new UltraSharp 30 (top image), a 30-inch 4K OLED monitor that will go on sale on March 31 for approximately $5,000 USD.

You read that correctly – Dell is specifically targeting graphic designers, video game programmers, and animators with the new UltraSharp 30, which can display 100 per cent of Adobe’s RGB palette and 97.8 percent of DCI-P3, the colour standard used in contemporary cinema. While the price seems steep, PC World notes that the only other comparable monitor runs for around $18,000 USD.

The UltraSharp 30 also includes special features to compensate for two weaknesses of OLED – namely, that static images displayed for too long risk burning into the screen, and a shorter lifespan because of the organic layer breaking down over time. To protect from the first, the monitor uses a pixel-shifting feature, while a detector that turns it off when nobody is in front of it protects from the second.

Not that any of this is likely to matter to the average user, who would simply notice that images displayed on the UltraSharp 30 look especially pretty.

Eric Emin Wood
Former editor of ITBusiness.ca turned consultant with public relations firm Porter Novelli. When not writing for the tech industry enjoys photography, movies, travelling, the Oxford comma, and will talk your ear off about animation if you give him an opening.
Previous articleChinese firms make prominent bid for western smartphone market at CES
Next articleA CMO to Know: Adrienne Weissman, G2 Crowd