Big box retailers appear to be expanding their e-commerce efforts, with Canadian Tire and Walmart bringing in-store, self-serve kiosks to brick and mortar stores across Canada.

Canadian Tire announced Wednesday that it is “bolstering” it e-commerce, calling itself the first retailer in Canada to have in store self-serve pick-up kiosk towers. However, Walmart Canada recently announced that it is also testing out similar towers in two of its Canadian stores.

In a press release, Canadian Tire stated that this move to create a better e-commerce experience for its customers, calling it a hassle-free way to order and collect purchases. 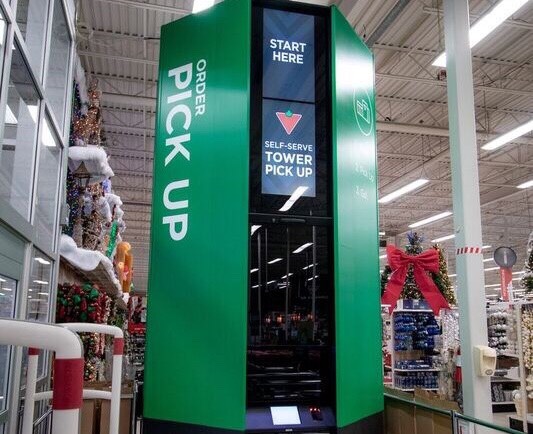 It has installed the 16 feet tall towers in five locations including Vancouver, Calgary, Saskatoon and two in the Toronto area. The self-serve pick-up kiosks allow consumers to make online purchases and pick up those products in the store.

According to a spokesperson for Canadian Tire, consumers won’t have to wait for their online orders to be delivered as the majority of orders are ready for pick-up the same day and the towers allow people to get their orders within a matter of minutes once they are in-store.

This is possible they said because 93 per cent of Canadian Tire’s orders are picked directly from the store inventory, rather than warehouses.

Once a customer’s order is ready for pick-up they will receive an email notification.

The towers came into use last week and locations where this service is currently available include:

At the same time, Canadian Tire also announced that it is “introducing a fleet of self-serve lockers and automated check-in terminals” to a few locations in Ottawa.

“To use the check-in terminals, customers can simply enter a unique PIN code on the in-store tablet, prompting store staff to bring their order directly to them,” stated the release, calling it a faster and more convenient way to shop online.

And while Canadian Tire is calling itself the first retailer to bring this service to Canada, it should be noted that Walmart Canada is also testing out similar towers it two Canadian retail locations, with plans to bring it to 20 other stores across the country by early 2019 according to Mobile Syrup.

This move to self-serve in store towers may one way for big box retailers to stay relevant and compete with increasing pressure from e-commerce giants like Amazon.

President of Canadian Tire Greg Hicks said in the release, “we’re a test and learn culture and a big part of that is finding new ways to help our customers shop when they want and how they want…we’re very excited to be the first retailer in Canada to introduce the Self-Serve Pick-Up Towers to some of our busiest stores as one more example of how we’re meeting our customers’ evolving needs.”

Meagan Simpson
Meagan Simpson is a staff writer for IT World Canada. A graduate of Carleton University’s journalism program, she loves sports, travelling, reading and photography, and when not covering tech news she can be found cuddled up on the couch with her cat and a good book.
Previous article
Accenture appoints Jeffrey Russel as Accenture Canada president
Next article
Hashtag Trending: Google staff stage walkout; WWW inventor speaks out; Facebook still losing European users