Bill Gates has been inspired to push on with his philanthropic work after the death of Steve Jobs reminded him that we only have “limited time” on earth.

Gates spoke to Nightline in a televised interview about his relationship with Jobs and how the Apple co-founder’s death affected him.

Though Gates and Jobs weren’t always on the best of terms, with Jobs’ biographer Walter Isaacson noting that “people can sometimes love each other and hate each other at the same time”, though in the interview Gates reveals that he paid a visit to Jobs’ home in the weeks before the Apple co-founder died. 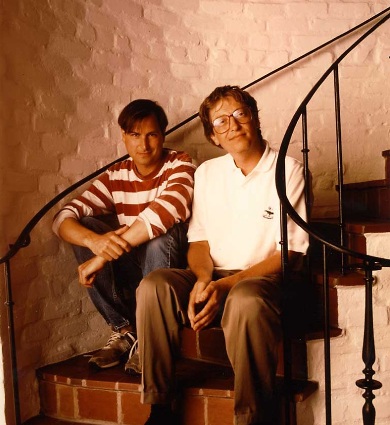 Much younger Bill Gates and Steve Jobs together

“He and I always enjoyed talking. He would throw some things out, you know, some stimulating things. We’d talk about the other companies that have come along. We talked about our families and how lucky we’d both been in terms of the women we married. It was great relaxed conversation,” said Gates.

The relationship wasn’t always so cordial, though. Jobs was dismissive when he heard the news that the former Microsoft boss had become the richest man in the world, saying: “That was never really my goal. And in the end, I’m not sure that was his goal either.”

Isaacson spoke to Gates as part of his research for his biography of Jobs. Gates told Isaacson that Apple’s business model “only worked if you had a Steve Jobs.”

When Isaacson told this to Jobs, he replied that Microsoft’s model also worked, “but only if you don’t mind putting out crappy products.”

Gates is now no longer the world’s richest man, having given much of his money away. Since 1994, the Gates Foundation has given grants totalling more than $26bn to various charities and projects. But Jobs’ death served as a reminder to Gates that he needed to push on with his philanthropic efforts, he said in the interview.

“Well, it’s very strange to have somebody who’s so vibrant and made such a huge difference and been kind of a constant presence, to have him die. It makes you feel like, ‘Wow, we’re getting old.’ I hope I still have quite a bit of time for the focus I have now, which is the philanthropic work.”

“And there’s drugs we’re investing in now that won’t be out for 15 years – malaria eradication, I need a couple of decades here to fulfill that opportunity. But, you know, it reminds you that you gotta pick important stuff, because you only have a limited time.”

2012 tablet sales to be slower than expected: analyst