The rise of workforce automation is leaving many Canadians behind, and its economy is paying the price.

According to PricewaterhouseCoopers’ (PwC) 2017 Golden Age Index, 42 per cent of the employed Canadian labour force, especially older workers, are at a high risk of being affected by automation over the next 10 to 20 years.

And while that’s hardly news to many ITBusiness.ca readers, the study notes that engaging those older workers in Canada could lead to a GDP growth of $51.3 million USD.

Workers with lower education levels are at a higher risk of losing their job to automation, PwC found. Older workers, specifically between the ages of 50 and 64, fall into this category more than people ages 25-49 do.

But according to PwC, that assumption is misplaced, as 74 per cent of older workers seeking jobs are willing to learn new skills to regain employment. The report also says that 26 per cent of Canadians have experienced age-based discrimination.

It is expected that by 2031, people 65 and older will make up 23 per cent of the Canadian population. The country currently ranks 16th out of 34 Organisation for Economic Co-operation and Development (OECD) countries on PwC’s Golden Age Index, and has a lower employment rate amongst older workers than Korea, Japan, Germany and Sweden.

Canada has to distance itself from the middle of the pack, said PwC partner Karen Forward in a statement.

“Improvements are possible when there is a cultural shift,” she said. “There is an opportunity for organizations to lead the way by innovating their development programs, and creating a sustainable work environment that contributes to the quality of life of its workers.” 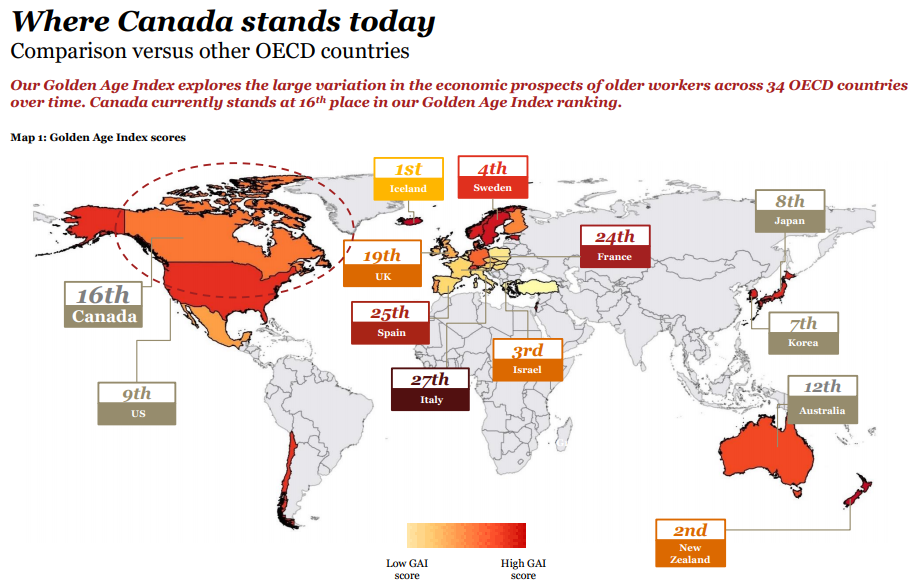 Alex Coophttp://www.itwc.ca
Former Editorial Director for IT World Canada and its sister publications.
Previous article
The lean Jedi: An agile approach to training with the Force
Next article
BlackBerry’s software and services division continues to shine in third quarter