Are users ready to drop phones for videoconferencing?

In a famous exhibit at the 1964 World’s Fair in New York City, AT&T Bell Labs demonstrated the Picturephone Mod 1, a small, oval device with a camera and a screen that allowed two people to see each other while they talked over the telephone network.

Six years later, the device was still in trials.

AT&T promoted the Picturephone as the telephone of the future, but high cost, inconvenience and a lack of compatible devices turned it into the phone of dreams instead. The same fate awaited many more videoconferencing technologies over the following decades, as systems sprouted up in boardrooms and some offices but mostly were reserved for scheduled meetings and for high-level executives.

In the past few years, the cost and convenience of video calling have made big advances. Smartphones, tablets and PCs fulfill the promise of the Picturephone with widely available hardware and software, while in higher price brackets, the experience is more immersive than ever. But even though making phone calls with video is now nearly as practical as doing so without, it’s unlikely that the purported phone of the future will ever be the everyday phone of the present. 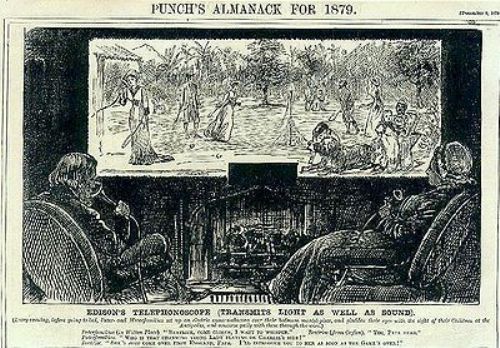 A combination videophone-television, conceptualized by George du Maurier and published in 1878. Note the use of then-contemporary speaking tubes by both the father in the foreground and his daughter on the viewing display. (From Wikipedia)

This has been a big year for video calling, with the introduction of Apple’s FaceTime for the iPhone and Cisco’s UMI TelePresence for home HDTVs. Third-party software and services, such as Skype, have made video calls possible with PCs and cheap webcams for years and are now coming to smartphones as well.

How to set up an awesome video conferencing system

The pros & cons of Telepresence

For people who want to see who they’re talking to, there are fewer barriers than ever to completing the picture. Yet video calling has yet to achieve the worry-free ease of traditional phone calls or even mobile text messages, analysts say. And even if it did, it’s not clear people would want to use the space-age wonder of 1964 for every call.

“The research shows people having serious interest in the whole concept of video telephony, but I don’t believe they’re ready to make it … their constant form of communication,” said Tim Bajarin, a longtime technology analyst at Creative Strategies.

Part of the problem is that most people just aren’t ready to go on camera every time they want to talk on the phone. In focus groups Bajarin has observed, consumers — even supposedly tech-loving teenagers — were concerned about their appearance. “You want to look presentable,” Bajarin said. Even in business, that isn’t a given, if telecommuters are included.

Video also shows the caller’s location and surroundings, which may pose a problem even in an office, said Wainhouse Research analyst Ira Weinstein. “Video sometimes reveals too much about a situation,” he said. Anyone with a messy cubicle who takes calls from a remote boss might agree with that.

But the problems can be practical, too. It’s not really possible to multitask during a video call, as is often done while talking on the phone, Weinsten noted. Video chats while driving can be counted out, too.

Despite all the advances of the past few years, a video call still isn’t as easy to make as a voice call, Weinstein said. Users need to find out whether the videoconferencing platforms they’re using are compatible, and often there is a question of how much it will cost. Despite vendors voicing commitments to interoperability, there is still a variety of specifications in use. In enterprise settings, these are not issues that commonly come up about traditional phone calls, Weinstein said.

The opportunities to use videoconferencing, however, continue to expand. In June, Apple introduced the iPhone 4 with a front-facing camera and FaceTime, a built-in video chat application that worked on any iPhone 4 over a Wi-Fi connection. CEO Steve Jobs said the company would submit the FaceTime protocol as a standard so other devices could hop on. Samsung’s newly introduced tablet, the Galaxy Tab, also offers video chat capability.

And in October, Cisco extended its TelePresence high-end conferencing technology to the home with Umi, a system that uses existing TVs and costs about $600 with a monthly service charge of $24.99. Though somewhat pricey for consumers, Umi costs dramatically less than enterprise TelePresence systems. Costs are coming down for large business systems, too, with recent entrants such as Logitech’s LifeSize division.

But even in enterprises, video will probably not take the place of one-to-one calls, Creative Strategies’ Bajarin said.

“It has its greatest value, in business settings, when you’re involved in collaborative processes,” Bajarin said. For a simple phone call, “You really want the fast process of getting the connection to the one person,” he said.

In homes, too, video still tends to occupy a niche, he said.

“Video calls tend to be scheduled, and somewhat a special event,” Bajarin said. For example, families may set times for grandparents to see and chat with their grandchildren. Despite the fact that those who have the technology typically can use it at all hours, such calls aren’t yet spontaneous impulses.

A survey that the Pew Internet & American Life Project concluded in September seems to back up that analysis. On any given day, only 4 per cent of Internet users in the U.S. participate in voice calls, video chat or videoconferencing, Pew said. That was up from just 2 per cent in April 2009, but still a small slice of the whole.

Just 19 per cent of U.S. adults have ever tried video calling of any kind, according to the survey of 3,001 adults. Perhaps not surprisingly, Internet users in the 18-29 age group were most likely to have done so, but only 29 per cent of them had, Pew said.

“I think the adoption process is going to be relatively slow,” Bajarin said. “If it does get adopted as a mainstream form of communication, I think it will be led by Gen Y,” he said, referring to the group typically defined as the children of the Baby Boomers, now in their 20s or younger.

To some degree, video will make the case for itself as more people experience it, said Andrew Davis, also an analyst at Wainhouse.

“Once you get used to video calls, you realize how intimate it is, and how personal, and how rich video is,” Davis said. “There are lots and lots of cases where video is inappropriate, but I do think that when it hits the cell phone and it’s literally as easy as making a voice call, I think it will be a lot more prevalent.”

Cyber Security Today, April 16, 2021 – Russians are coming for these devices, how a games company was hacked and be careful with internet searches