In the third quarter of 2015, consumers bought 353 million smartphones worldwide – a 15.5 percent growth over the same period in 2014. According to Gartner’s latest report on mobile phone sales, this growth was largely due to the sales of affordable smartphones in emerging markets.

With the price of smartphones dropping, many consumers in markets like China and India who would have bought a “feature phones” have opted for an Android-based smartphone instead.

Samsung, with 23.7 of all smartphone sales, led the market, but Huawei had the highest growth in sales. 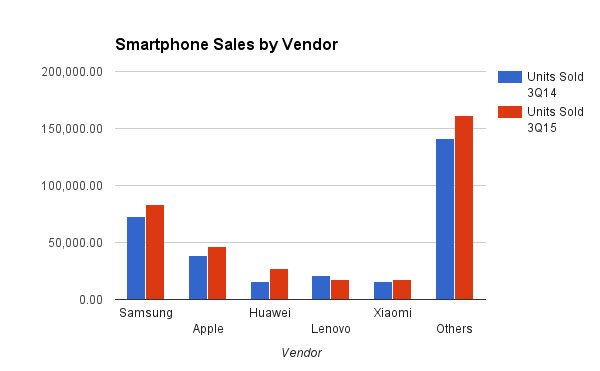 Gartner noted that Chinese brands such as ZTE, Xiaomi, TCL Communication Technology, Oppo and BBK have became increasingly aggressive in emerging markets, but none so much as Huawei. Huawei’s smartphone sales increased 68 percent compared to the same quarter last year. Huawei has also been succeeding abroad in Europe where its brand visibility is steadily growing.

For its part, Samsung refreshed its flagship line of phones during Q3 with more affordable devices rather than the high-end devices that are in lower demand.

Apple continues to dominate the premium smartphone category with the recent release of the iPhone 6 and iPhone 6 Plus.

This market for premium smartphones will continue to exist, but for many worldwide consumers, a budget smartphone seems to be premium enough.

David Hamiltonhttp://davidihamilton.com/
As a journalist, I delve into topics where technology and society collide. I’ve written for Canadian newspaper The National Post, and posted more than 3,000 articles on technology related to the Internet as a staff writer for trade publication the Web Host Industry Review. And I host and produce a podcast called Techish.
Previous articleIoT? “Never heard of it,” say over half of Canadian businesses
Next articleSalesforce Marketing Cloud uses data analytics to predict what customers will do next