Penthouse owners of Canderel’s new YC Condos suites in the heart of downtown Toronto will be connected to their home through their smartphone in a way most people could only imagine.

Working with Samsung Corp. and Truemarque Ltd., the sole distributor of Samsung Smart Home products in Canada, Canderel has made a wireless smart home package a standard in each of its penthouses and an optional add-on for other units in the building. That means that condo owners can use the smartphone to see who’s at their front door (or elsewhere in the apartment from the other connected video cameras) and choose to unlock the door from their device.

When at home, the condo owner will be able to control their audio system, television and Blu-ray player from the same device. Motion sensor lights will turn on and off automatically as the resident moves around their home.

“What we’re offering here, we think is going to be a real differentiator,” says Rizwan Dhanji, vice-president of sales and marketing for the residential group at Canderel. “It’s the first like it in the Canadian market.”

Canderel, one of the largest developers in the GTA with more than 5,000 condo units either built or under construction is targeting young professionals between the age of 20 and 45 living in the downtown core. It sought a partnership with Samsung as a way to offer that demographic connectivity to their homes from the devices they already rely on for so many other things.

“They’re saying ‘we’re connected every day, what are we going to do to get connected to our home?'” Rizwan says. “Working with the world’s largest electronics brand really helps.” 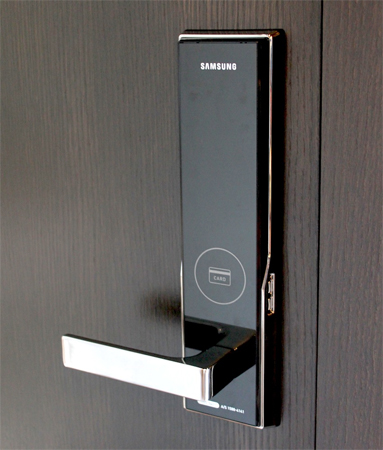 For Samsung, the smart home market is a growth opportunity, says Paul Brannen, the senior vice-president of enterprise and mobile solutions at Samsung. It has already been building smart connectivity features into its electronics such as televisions and speaker systems and now it’s looking for a way to bring it all together.

“The door lock is a bit of a metaphor, it’s our entry to the smart home,” Brannen says. “We really believe the best path to market for the smart home is the non-traditional path. Building it right into the home out of the gate is the best approach.”

Rather than rely on wiring condos with CAT5 cable and using PCs to control the system, Samsung sees a combination of wireless technology and a smartphone or tablet control being the winning combination for smart homes. Using Bluetooth Low Energy, a Wi-fi hub, and Wi-Fi Direct technology, a mobile device or wall panel could feasibly control every other connected device in the home.

“Clearly we’d like every device in your house to be Samsung and we’re trying to differentiate for it to be easier to connect those devices,” Brannen says. “We don’t have any direct competition as of yet. There are other solutions, but they are probably not as cost effective and they have other infrastructure requirements.”

For YC Condo residents that want to add on the package, the cost will be just under $10,000, according to Dhanji. Plus, you can start with a couple door sensors or a smart lock and work your way up from there, adding additional devices or sensors to the system over time.

While a Samsung device is featured as the control unit at first, Truemarque will be developing other apps for platforms like iOS so more condo owners can take advantage.

Samsung wants to be the leader in the market, Brannen says, but it also doesn’t want to create a closed eco-system, as it could be beneficial to connect with other manufacturers in areas that Samsung doesn’t cover.