Tick-tock. The clock is ticking for Windows XP. Microsoft is cutting support on the operating system on April 8, 2014. That means no more patches, no more new software versions, no more drivers for new peripherals.

But some businesses are stubborn. They see no reason to move from the reliable operating system that was released in 2001. That’s what we heard in response to our recent article by Howard Solomon, “The end of Windows XP: Some still haven’t got the message.”

It’s the end of Windows XP: Are you ready? Breakfast events across the country

To address some of those comments – and get to the truth about migrating away from Windows XP, we asked Steve Heck, the CIO of Microsoft Canada, to shoot a video with us to do some myth busting. Here are the comments we selected for a response, below. Watch the video to see Heck’s answers.

It’s almost less expensive to buy a new workstation with Windows 7 installed than it is to buy a new retail copy of Windows 7. The only problem is, moving everything to the new box and making it work isn’t a lot of fun for non-techy managers. Ironically, Microsoft will offer lots of support to enterprise level customers to make the move, but ignores the biggest chunk of users entirely – small businesses. Until Microsoft develops a better plan for helping SMBs make the switch, they just wont… 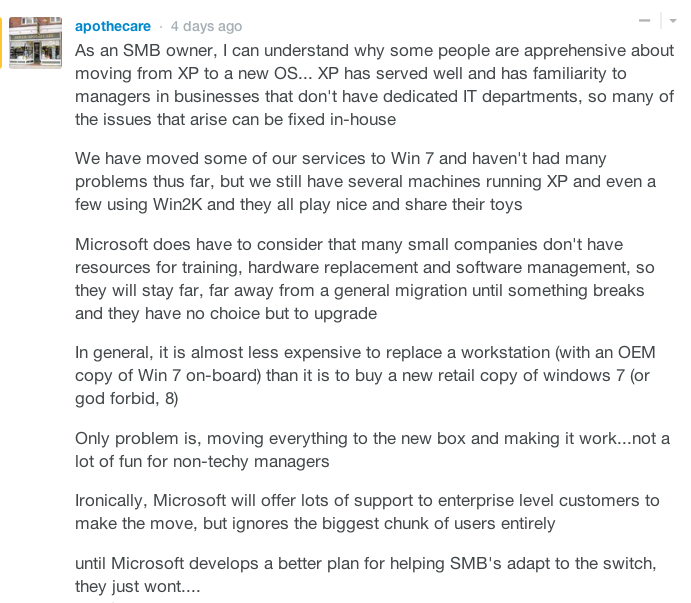 Related
The end of Windows XP: Some still haven’t got the message

If hackers find an exploit it’s because your fire wall sucks. The operating system has no business even trying to be a fire wall , a virus scanner, and 15 other things rolled into one.

Some organizations simply may not be able to afford to move off XP based only on the implied threats associated with the end of XP support. Even if your current PC is suitable to run Windows 7 or 8, there is no migration path from XP to anything other than Vista. So every box must be rebuilt from scratch.

Many applications may require expensive upgrades to work in Windows 8 or not work at all. Not to mention incompatible peripherals. Small businesses on tight budgets are likely to take the approach of: “If it ain’t broke, don’t fix it.”