All Hands on Tech: The HP Spectre x360 ultraportable laptop

Hello, I’m Jeff Jedras for ITBusiness.ca and today, we go All Hands on Tech with HP’s answer to the Macbook Air – the HP Spectre x360.

When I first unboxed HP’s Spectre x360 my first thought was darn, that’s pretty. You can definitely see the Apple influence with the aluminum body, chiclet keyboard and slick lines. And they paid attention to the little things, like higher end packaging, and a neoprene sleeve to help keep it looking like new. Like most Apple products, it feels like a premium device. And at just over three pounds, it certainly is portable.

The x360 doesn’t just look pretty. It has plenty of power under the hood with an Intel Core i7 processor and 8GB of RAM, as well as 256GB of SSD storage. It also takes advantage of Windows 8 with a 13.3″ HD touch display offering 1920 by 1080 resolution.

I took the x360 on a few business trips and, to be honest, the results were mixed. It was certainly portable and the battery life was fantastic, but I had a few usability issues.

For example, the trackpad. It was not always as responsive as I would like. Also, I’m a frequent right clicker, and the lack of dedicated left and right mouse buttons was frustrating for me. If you’re going to build a premium laptop, give me a premium trackpad. 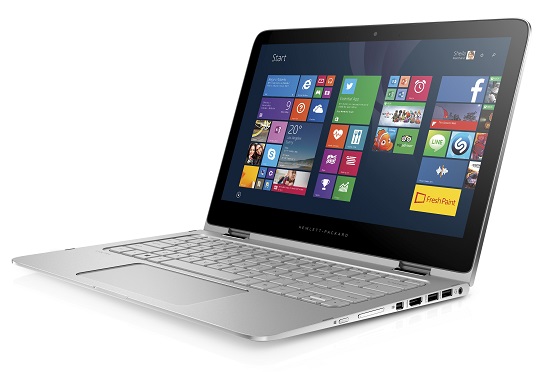 One of the x360’s selling points is supposed to be the conversion to a tablet format. For one, the keyboard is on the back and, while it’s disabled in tablet mode, it still feels awkward. The 13.3” size is a bit unwieldly in tablet mode. And in landscape format the air vents are over my hand, which tends to raise the temperature quickly.

The Spectre x360 was jointly designed by HP and Microsoft to be a high end ultraportable that showcases the new features of Windows 10. While my number hasn’t come up in the Windows 10 download lottery yet, the Spectre x360 is probably the best Windows 10 laptop you could buy. And while it comes close to perfection, I feel it falls just a little bit short.

Still, if you’re in the market for a Windows-based premium ultraportable, you’d be hard-pressed to do better than the HP Spectre x360.

For All Hands on Tech, I’m Jeff Jedras.

Jeff Jedras
Jeff Jedras is a technology journalist with IT World Canada and a member of the IT Business team. He began his career in technology journalism in the late 1990s, covering the Ottawa technology sector for Silicon Valley North and the Ottawa Business Journal. He later covered the technology scene in Vancouver before joining IT World Canada in Toronto in 2005, covering enterprise IT for ComputerWorld Canada and the channel for Computer Dealer News. His writing has also appeared in the Vancouver Sun & the Ottawa Citizen.
Previous article
‘Humagrams’ aim to be hyper-realistic human projections
Next article
How To In Windows 10: Use the new Start Menu