From the Samsung Galaxy S4 to the Sony Xperia ZL, five inch Android handsets are the hottest part of the smartphone market today. And HTC is hoping life will be a dream with its new HTC One. Let’s find out, as we go all hands on tech.

The successor to 2012’s HTC One X, the One is actually 4.7”, but we won’t hold that against it. While it’s a third of an inch smaller than Samsung’s Galaxy S4, it packs more pixels with 468 per inch in its 1080p display. Combine that with the Beats Audio and it’s great for watching videos.

With its all-aluminum case the One feels substantial, and not cheap or plasticy like some of its competitors. It looks big, but it’s quite light at 143g and fits in my pocket easily. In a neat feature, the power button doubles as an IR transmitter, so no more remote control.

The One runs Android JellyBean, with a few added HTC innovations. One of them is BlinkFeed, which is designed to aggregate your social media feed with other trusted news sources. I didn’t find it helpful though; just one more screen to skip past.

I did like HTC’s intuitive setup program I ran on my desktop, which helped me find useful apps and send then directly to my phone. For example, this Cardiograph app, which uses the camera to measure my pulse. More often than not through, it told me I had no pulse, so perhaps I should see a doctor instead.

One benefit of a bigger screen is a bigger keyboard, helpful for those who, like me, prefer the hard qwerty keypad. We can’t forget the camera – its of decent enough quality – here’s a steak with mac & cheese I enjoyed in California a few weeks back. And look, it can take phone calls too. 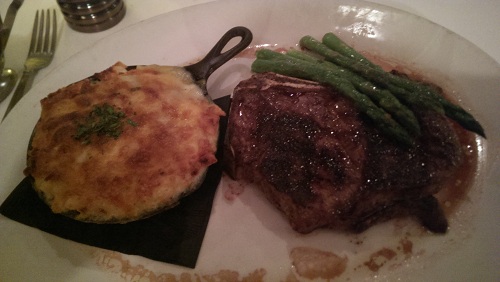 If you’re looking for an Android phone with a big, crisp, high quality display, the HTC One is worth a look. Its available now from most Canadian carriers including Telus, who want $149 on a three-year contract, or $650 outright.