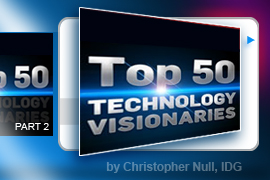 Here’s our take on the 50 most important people
in the last 50 years of technical innovation. 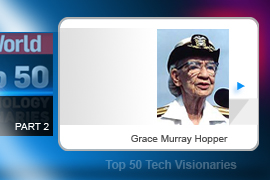 Grace Murray Hopper
Naval officer “Amazing” Grace Hopper worked on the team that developed the UNIVAC, the world’s first commercial computer, and wrote the compiler software for it (the first such software ever developed). She popularized (and possibly coined) the term “bug” after a moth was found in a computer relay during her years at Harvard. 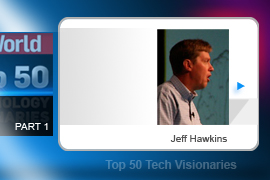 Jeff Hawkins
Portable computing was shaped in large part by Jeff Hawkins, who invented the acclaimed PalmPilot, and then followed that up by spearheading development of the Treo six years later. 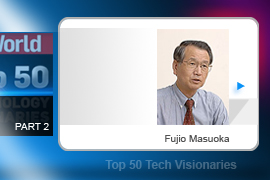 Fujio Masuoka
If anything is positioned to challenge the dominance of Al Shugart’s hard drive (see slide no.8), it’s Flash memory – invented by Fujio Masuoka. Masuoka during his tenure at Toshiba. (Masuoka says that the company initially tried to demote him after he came up with the technology). 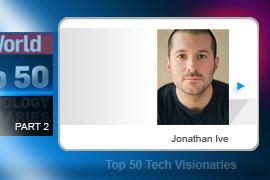 Jonathan Ive
Apple VP and design guru Jonathan Ive killed off the beige boxes and bricklike pocket gizmos that had become standard-issue in the tech industry. Ive’s designs for the original iMac and for the iPod got people thinking about tech products as fashion accessories and decorative items. 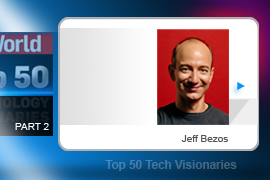 Jeff Bezos
Long scorned by Wall Street, Amazon.com — the creation of Jeff Bezos — is today the one Internet service that many people can’t live without. His company has also become one of the leading providers of Web services, online storage, and by-the-hour CPU rentals. 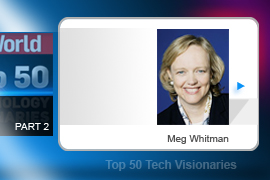 Meg Whitman
Meg Whitman joined eBay in its infancy and over the course of a ten-year run shepherded it into one of the most successful businesses on the Web. She retired as CEO in March of this year. 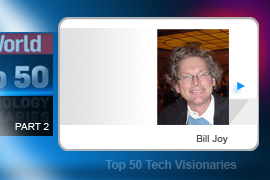 Bill Joy
Bill Joy was chief scientist for Sun Microsystems for over 20 years, where he oversaw the development of Java. His greatest achievement is probably an academic project he worked on at Berkeley: The development of Berkeley Software Distribution (BSD), a major flavor of Unix; even Mac OS X uses BSD as its basis. 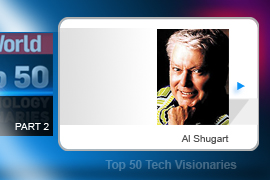 Al Shugart
Al Shugart founded Seagate Technology, where he developed technology that he had tinkered with during a stint at IBM (where he led the team that invented the floppy disk) into the hard drive for the mass market. 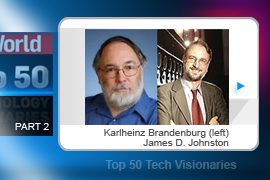 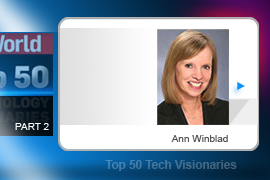 Ann Winblad
Half of the Hummer Winblad Venture Partners investment group, Ann Winblad was a key figure in the Web 1.0 boom, investing in such proto-companies as Napster, Gazoontite, Liquid Audio, and Pets.com. She also achieved indisputable nerd credit by having dated Bill Gates. 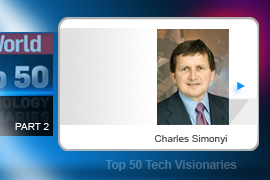 Charles Simonyi
As head of Microsoft’s application development group, Simonyi oversaw development of both Word and Excel back in the MS-DOS days and superintended the app suite for more than 20 years. Fun facts to know and tell: Simonyi was the second Hungarian in space and is Martha Stewart’s boyfriend. 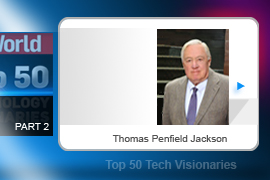 Thomas Penfield Jackson
In 1999 U.S. District Court Judge Thomas Penfield Jackson shook the tech world to its foundations when he handed down a landmark ruling declaring Microsoft to be an abusive monopoly and ordering it split into two companies (appellate courts eventually overturned the ruling). 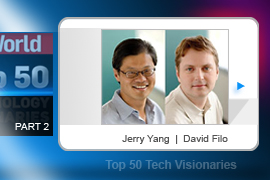 Jerry Yang and David Filo
This unassuming twosome got their start in 1994 while still at Stanford, with a truly humble idea: Populate a directory with cool places that they had found on the then-infant World Wide Web. Yahoo was born on a lark but Jerry Yang (left) and David Filo helped it become one of the Web’s top destinations. 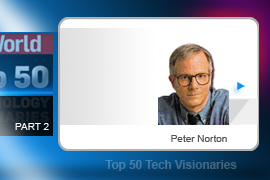 Peter Norton
A Buddhist monk before becoming involved in the tech world, Peter Norton has been a major figure in the computer industry for three decades, having made his mark early in the DOS era with Norton Utilities. He sold his company to Symantec in 1990. 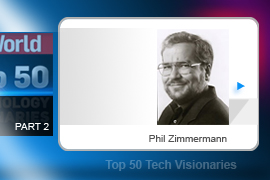 Phil Zimmermann
Phil Zimmermann’s 1991 Pretty Good Privacy (PGP) application, the first mainstream encryption software, made Zimmermann a pariah in the eyes of the U.S. government for allegedly violating rules forbidding the export of cryptographic tools. The case was ultimately dropped. 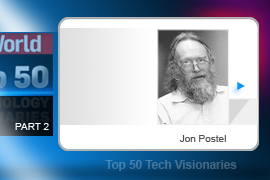 Jon Postel
Jon Postel is known as the Father of DNS — the system that translates an IP address into a URL. Postel also did substantial work on the TCP/IP and SMTP protocols, authoring some 200 Internet spec documents overall. Postel died in 1998. 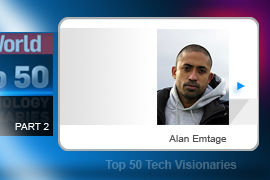 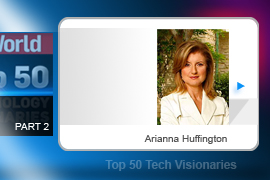 Arianna Huffington
Political insider Arianna Huffington has had a major influence on technology, but one that has been felt only recently. In 2005 she launched a little online project called The Huffington Post, which rapidly grew into one of the Web’s most powerful political voices. More than anything, the HuffPo has proven the power of the blog. 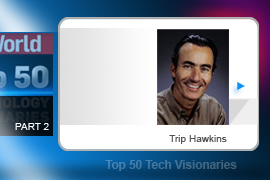 Trip Hawkins
Electronic Arts is one of the few pure software companies that continues to be important 25 years after its founding by Trip Hawkins, a Harvard and Stanford grad and Apple alumnus who in 1982 saw the future in consoles and computer-based games. 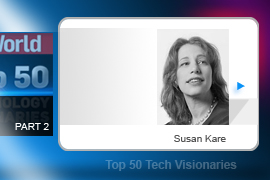 Susan Kare
Susan Kare’s earliest achievement was designing the typefaces — and some of the, er, iconic icons — that shipped with the Macintosh, including. The “Happy Mac”. She also designed the cards for Windows’ ubiquitous Solitaire game and now designs Facebook’s “Gifts” feature. 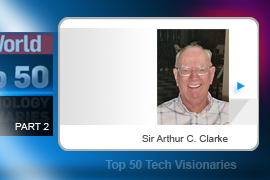 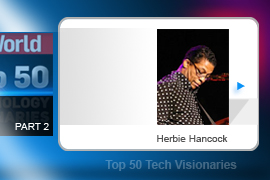 Herbie Hancock
When Herbie Hancock released his single, “Rockit” in 1983, everyone was struck by its unique sound. Though Hancock was by no means the first person to make heavy use of computer-based musical equipment, few musicians relied so heavily on such gear. “Rockit,” with its innovative music video, is now considered a turning point in the electronic music-making scene. 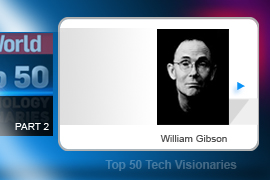 William Gibson
The king of cyberpunk, William Gibson, has dreamed up all manner of high-minded techno wizardry, some of which has actually started to come true. His early stories introduced the term “cyberspace”. 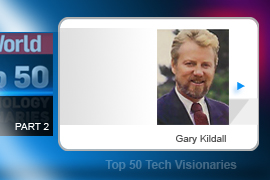 Gary Kildall
Called “The Man Who Could Have Been Bill Gates” by BusinessWeek, Gary Kildall was the guy Gates beat out in the bidding to supply IBM with the operating system for the original PC. Kildall also headed up Digital Research, which created the seminal pre-DOS operating system CP/M. 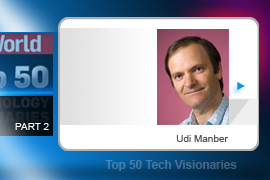 Udi Manber
From Yahoo to Amazon’s A9 to Google, Manber has been one of the search business’s greatest contributors. He was a key member of the Alta Vista design team on what many feel was the best engine running until Google came along.

Top 10 tips to get started on Google+