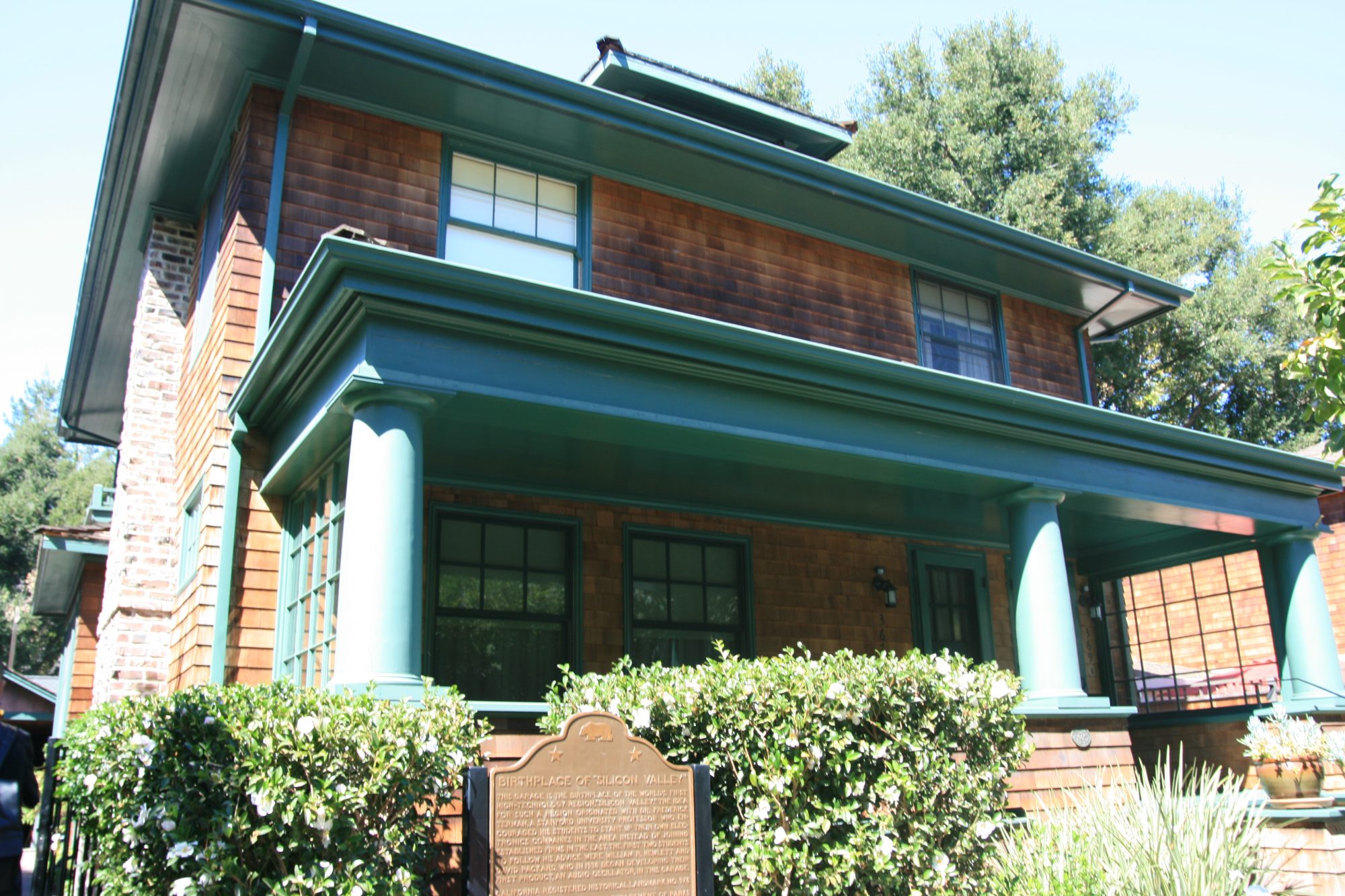 PALO ALTO, Calif. – As part of HP Reinvention Week, HP Inc. invited media from around the world, including ITBusiness.ca, to “the Garage,” the birthplace of the original Hewlett-Packard company and (according to the plaque in front of the house at least) the first of the Bay Area’s tech giants to be founded in Silicon Valley. Unfortunately, for regulatory reasons the Garage isn’t open to the public – but you can join us for a tour. Click on. 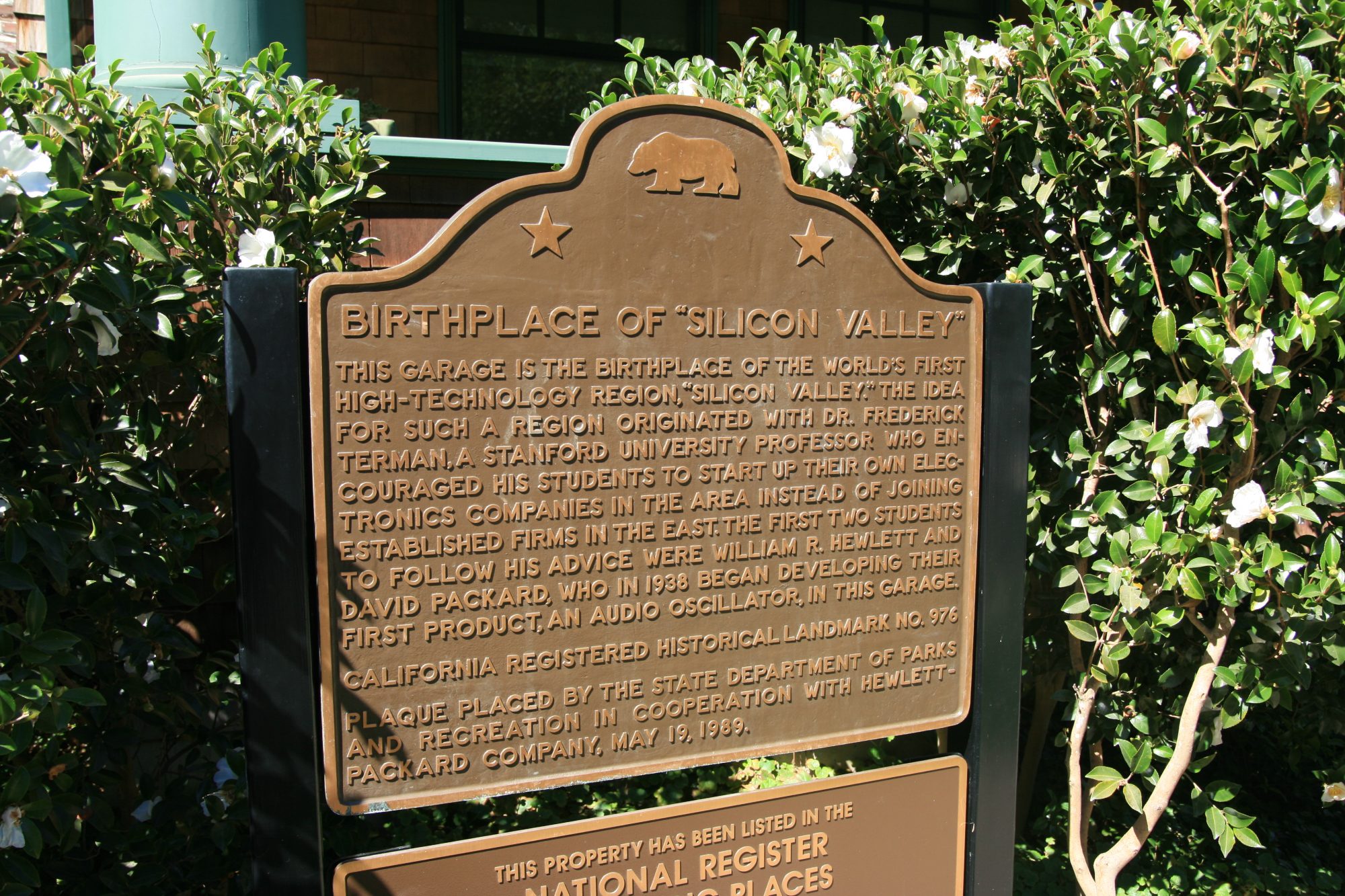 This sign (click here for a larger version) stretches the truth a bit. After graduating from Stanford University in 1934, Packard was hired by General Electric, while Hewlett earned his graduate degree at MIT before returning to Palo Alto in 1936. Guided by the above-mentioned Professor Terman, Hewlett began a grant-sponsored project involving audio oscillators in 1938 – which, not coincidentally, is when he and Packard decided to go into business together. 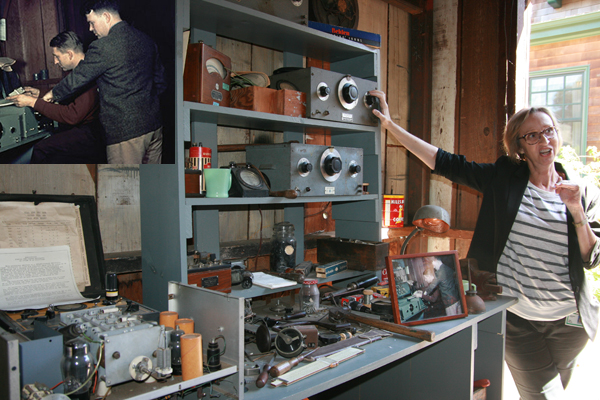 HP guide Anna Mancini shows off a collection of HP’s first oscillators, which were used to test audio equipment in industries such as radio, movies, and telecommunications. (We’ll tell you why they took off later.) Notice the photo of Hewlett and Packard to her right (inset), taken in December 1938. Packard was tall and Hewlett was not, so in photos Packard would often be seated while Hewlett was left standing, as is the case here. 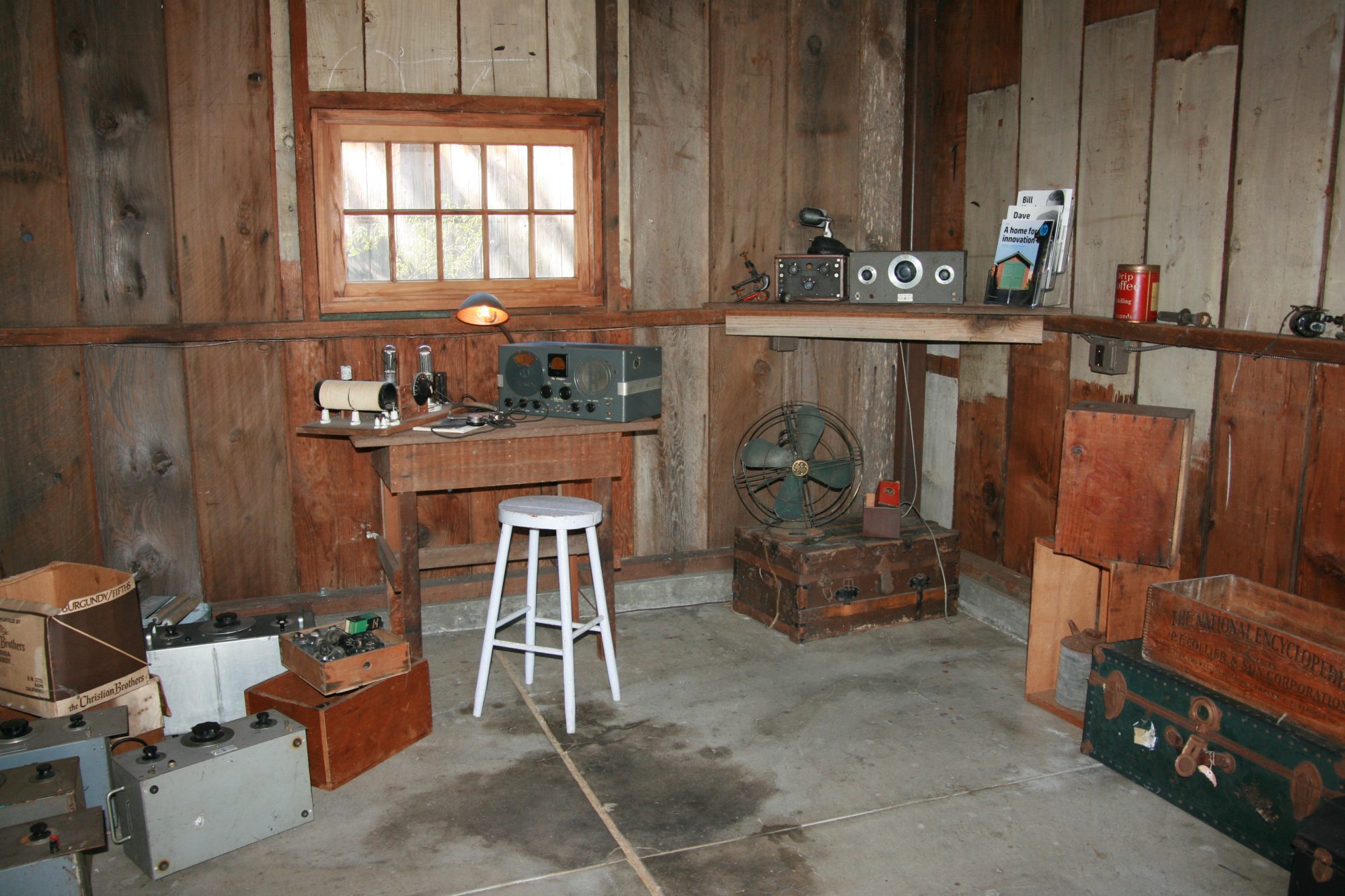 Renting the garage added $12 to Hewlett and Packard’s monthly rent – a paltry sum, even then, and a key reason they moved in. They officially founded HP in January 1939, using a coin toss to determine whose name would come first, and by 1940 had a growing company with two additional employees. While the apartments next door would remain its founders’ homes for some time, the Garage itself ultimately served as HP’s headquarters for only 18 months. 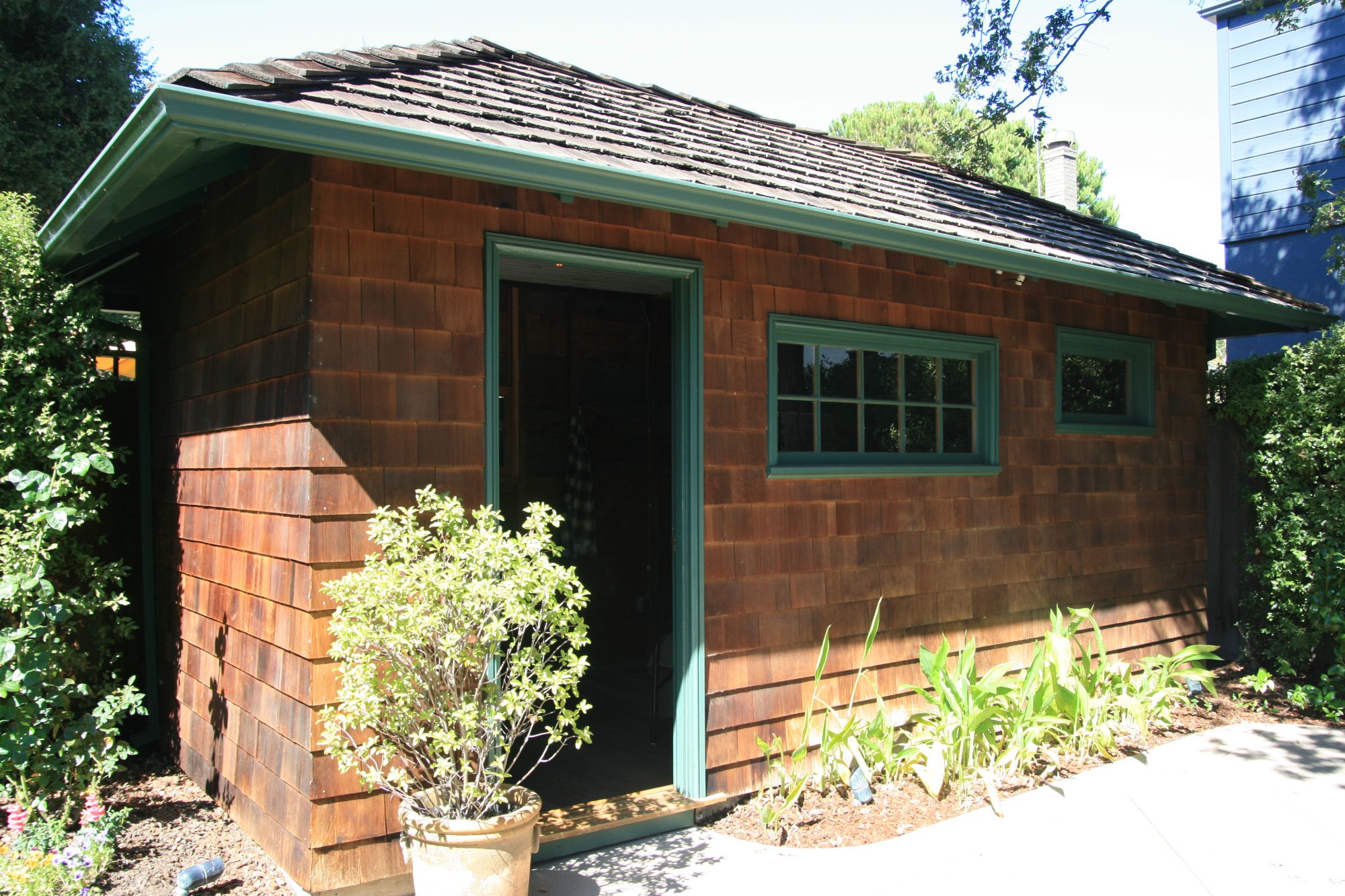 How would you like to live here? When HP started, Hewlett was married, but Packard remained a bachelor, and of the site’s three apartments – the single-family home, originally built in 1905 and occupied by one of Palo Alto’s former mayors, had been split in two since 1918 – Packard chose the one at the back. 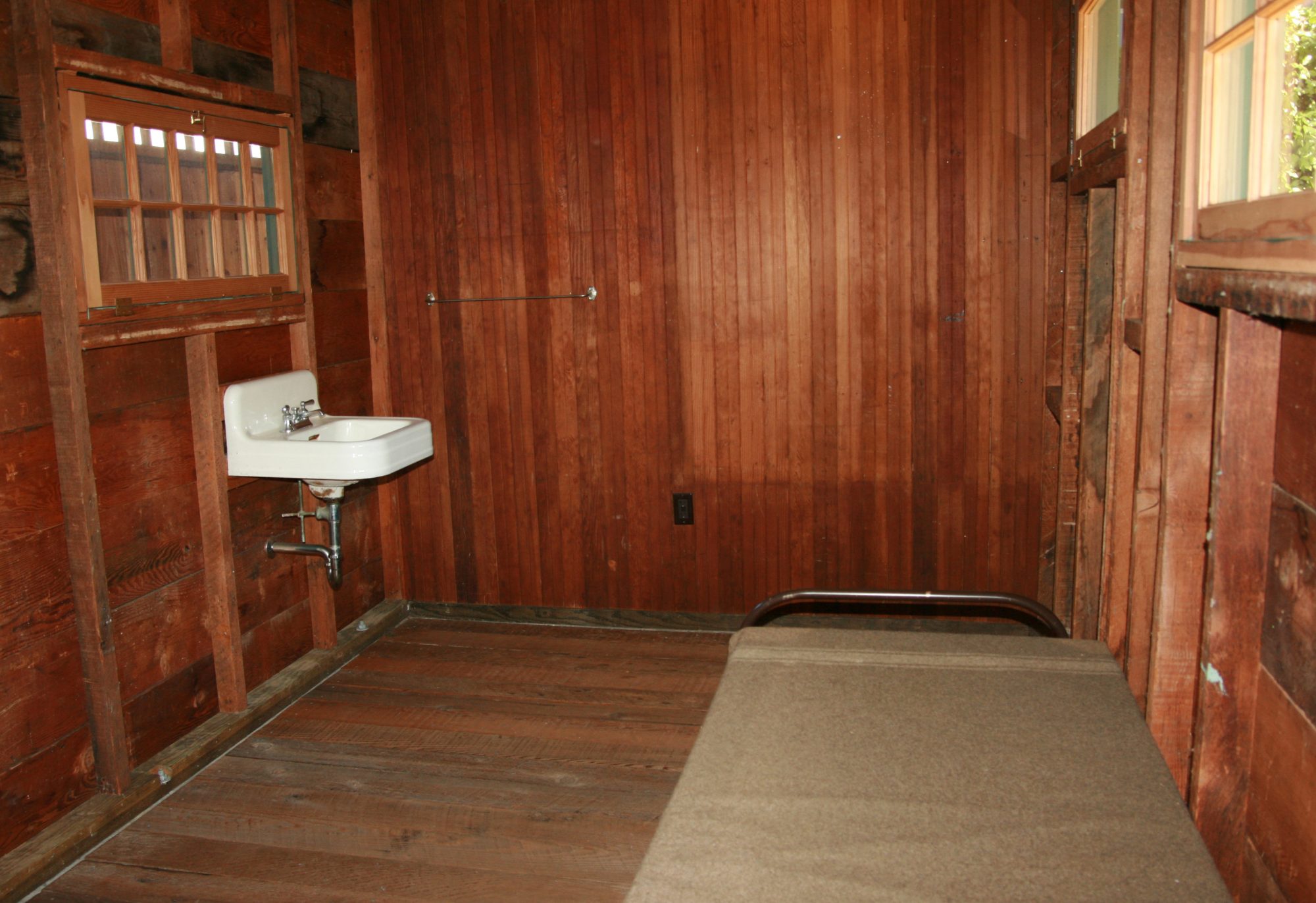 Inside, it looks even smaller – and there’s no longer a toilet! 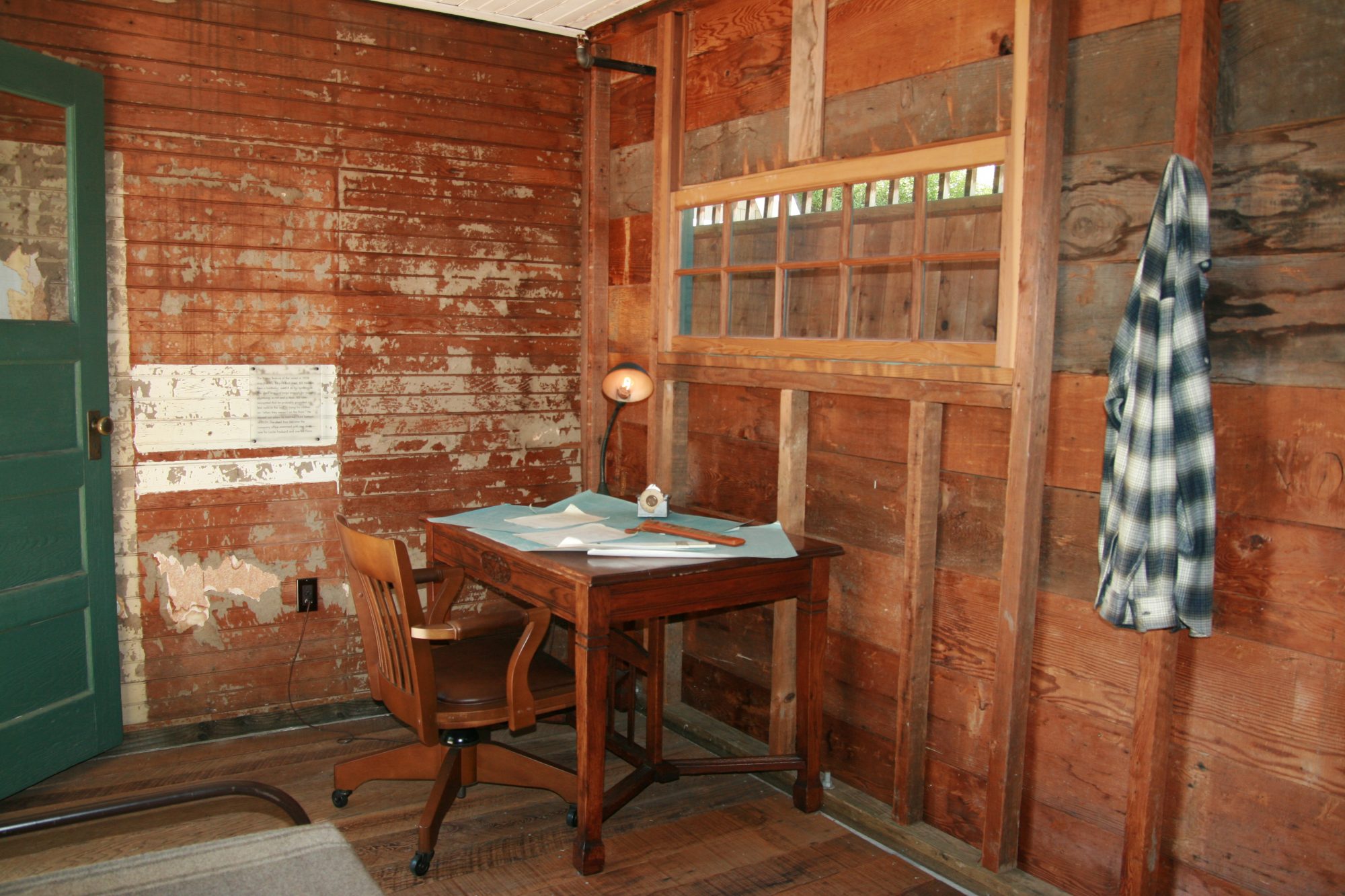 HP cheated a bit with Packard’s residence, preserving part of it as the bedroom he lived in until 1939, when he married his wife, Flora – and part of it as the office used by Flora and Hewlett’s wife, Lucile, until the company moved its base of operations to Palo Alto’s Page Mill Road, near HP’s present headquarters. 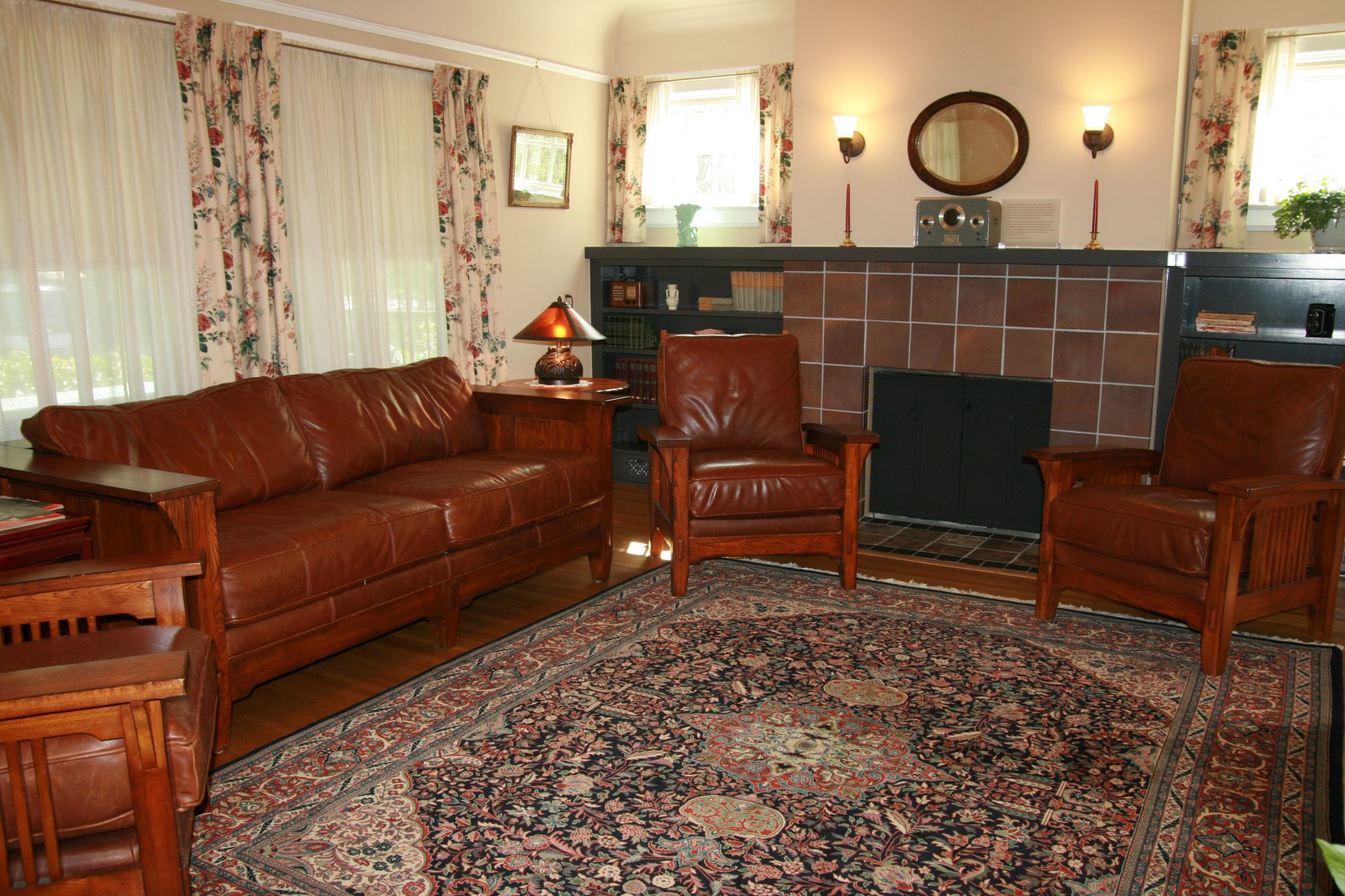 In the early going, whenever prospective clients visited Hewlett and Packard the living room in Hewlett’s first-floor apartment served as the company’s front office, and Lucile took great care to present it accordingly. To this day the leather couches and armchairs are used to entertain some 30,000 visitors every year – and the company’s first oscillator still holds a place of honour above the mantel. 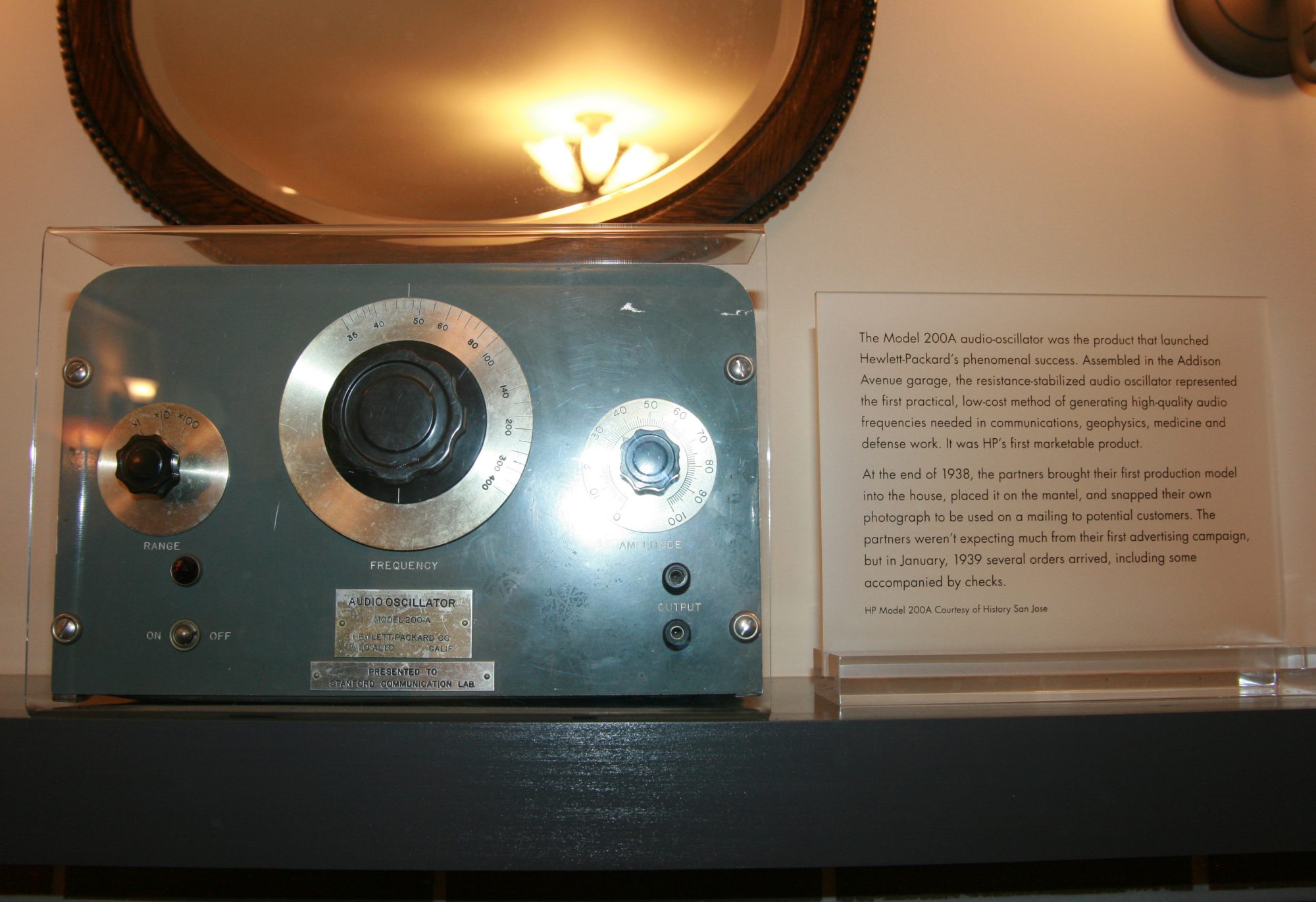 Hewlett wasn’t the first engineer to develop an oscillator, but he perfected it: by adding a light bulb to the device’s bridge circuit, he solved a longstanding problem of how to regulate the circuit’s output without causing distortion. He and Packard dubbed their invention the “200A” to make it seem like the company had been around for a while – and charged $54.40 for it, a considerable discount from the $200 – $600 competitors were charging at the time. 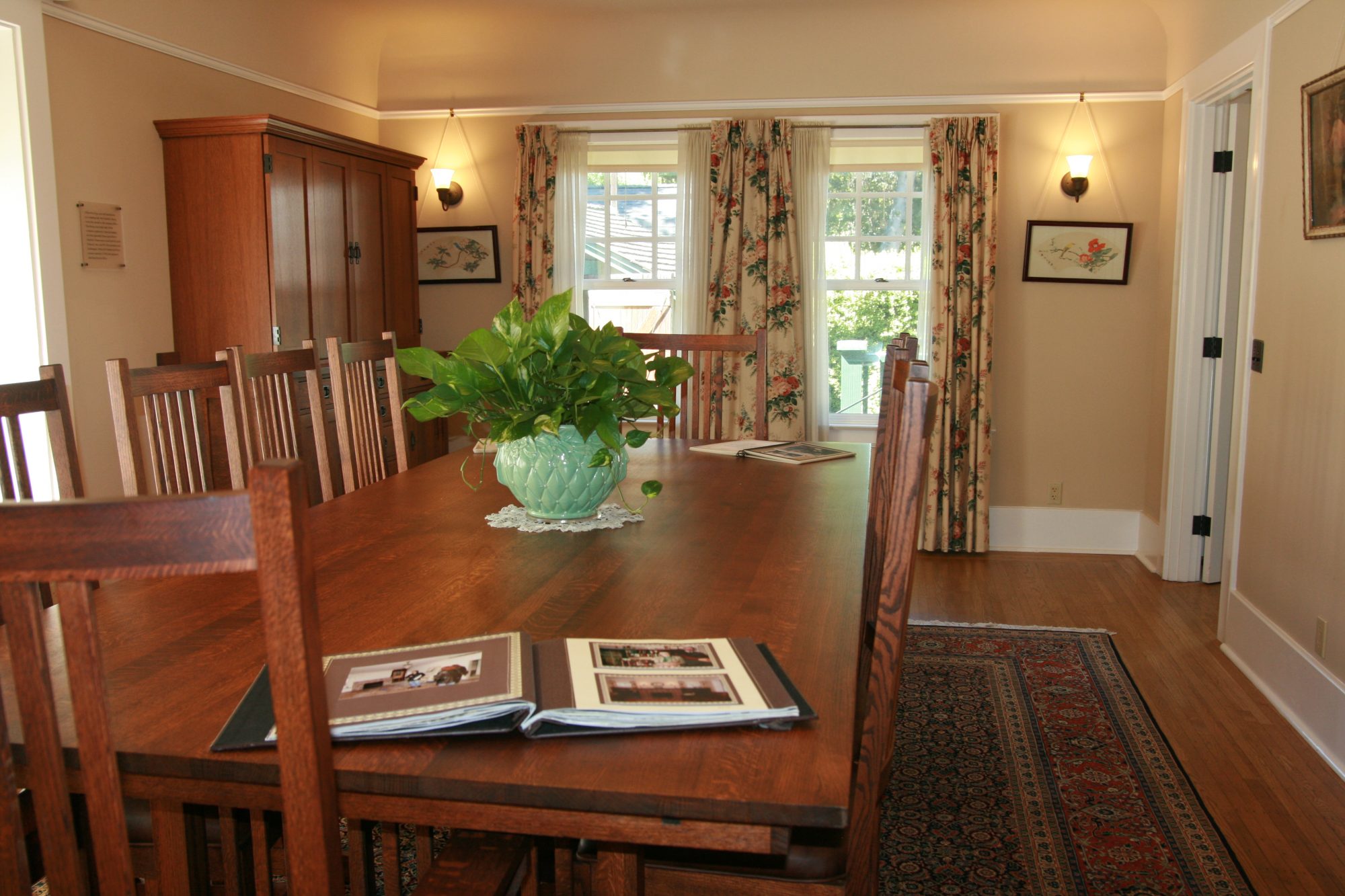 A reproduction of the original, the dining table was considerably smaller in Hewlett’s time, when it wasn’t used to entertain groups of eight or 10 visitors at a time. In fact, much of the home is a restoration, the result of a year-long 2005 undertaking to bring the house up to code. The floors, doors, window frames, and chimney are original, but more or less everything else is based on the scrapbook Lucile meticulously kept of the company’s early years. 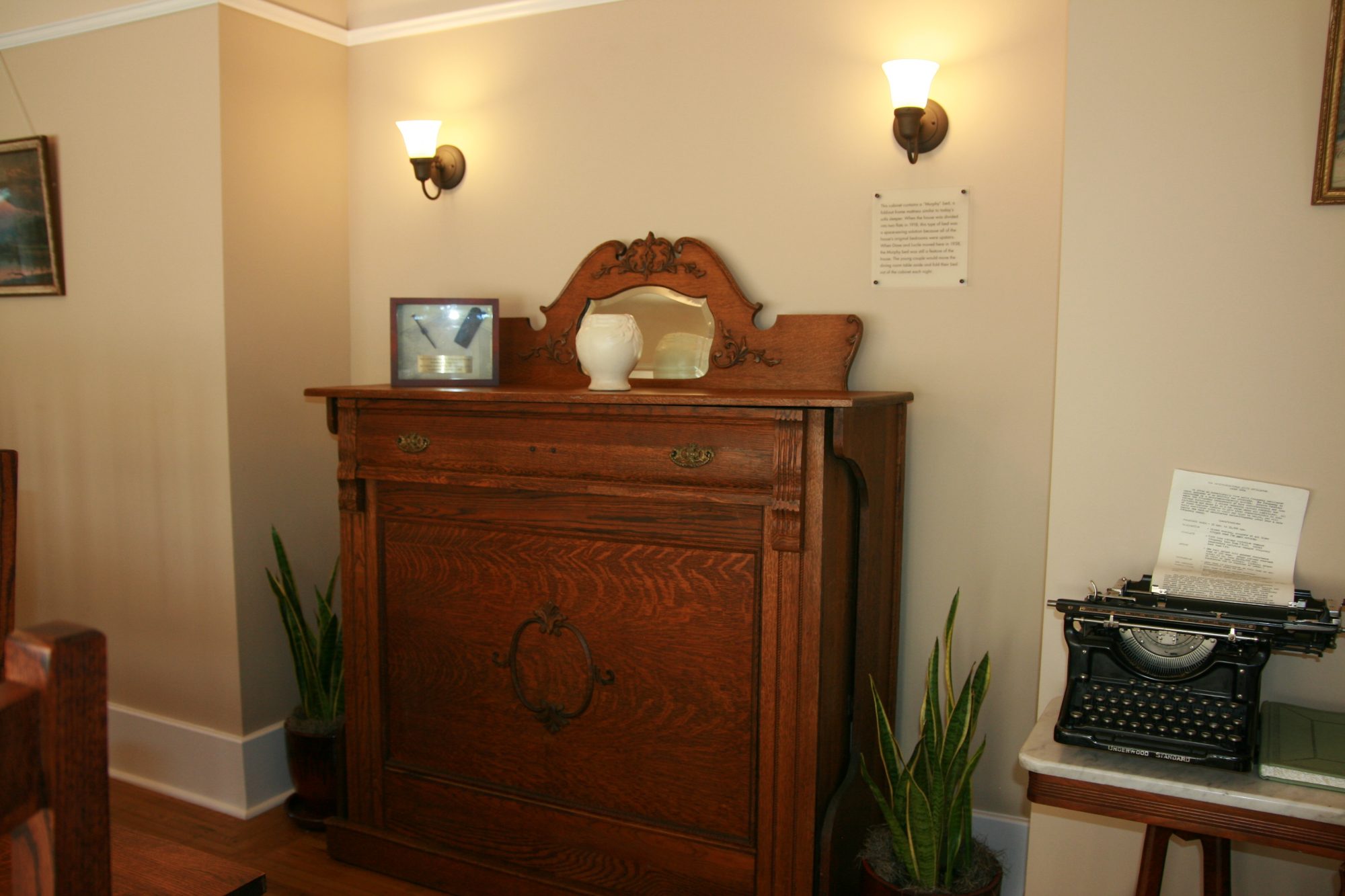 This cabinet contains a Murphy bed, a wall-mounted fold-out mattress similar to a pullout couch that was a common space-saving solution in 1938, when Hewlett and Lucile moved in. With the home’s original bedrooms upstairs, the young couple would move the dining room table aside and fold their bed out from the cabinet every night. 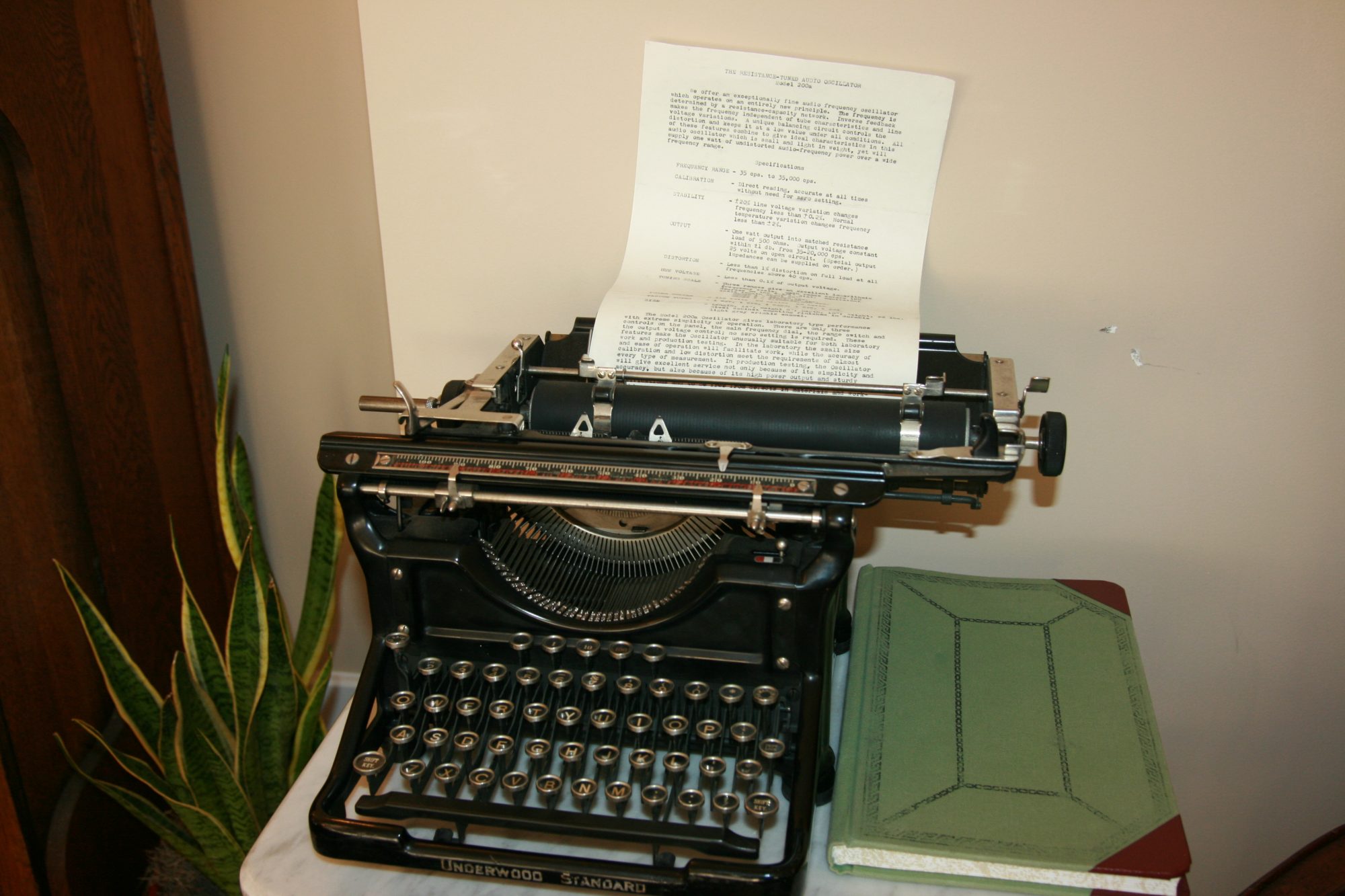 This shrine of sorts to Lucile Hewlett preserves not only a sample of her writing, but her ledger, and reading both one gets a sense of what our guide Mancini called “an equal partnership.” In addition to supporting her husband on her secretary’s salary, the Stanford-educated Lucile procured supplies, arranged meetings, balanced the books, and essentially served as HP’s first marketing department. We’re happy to report she also drew a salary once the company was profitable. 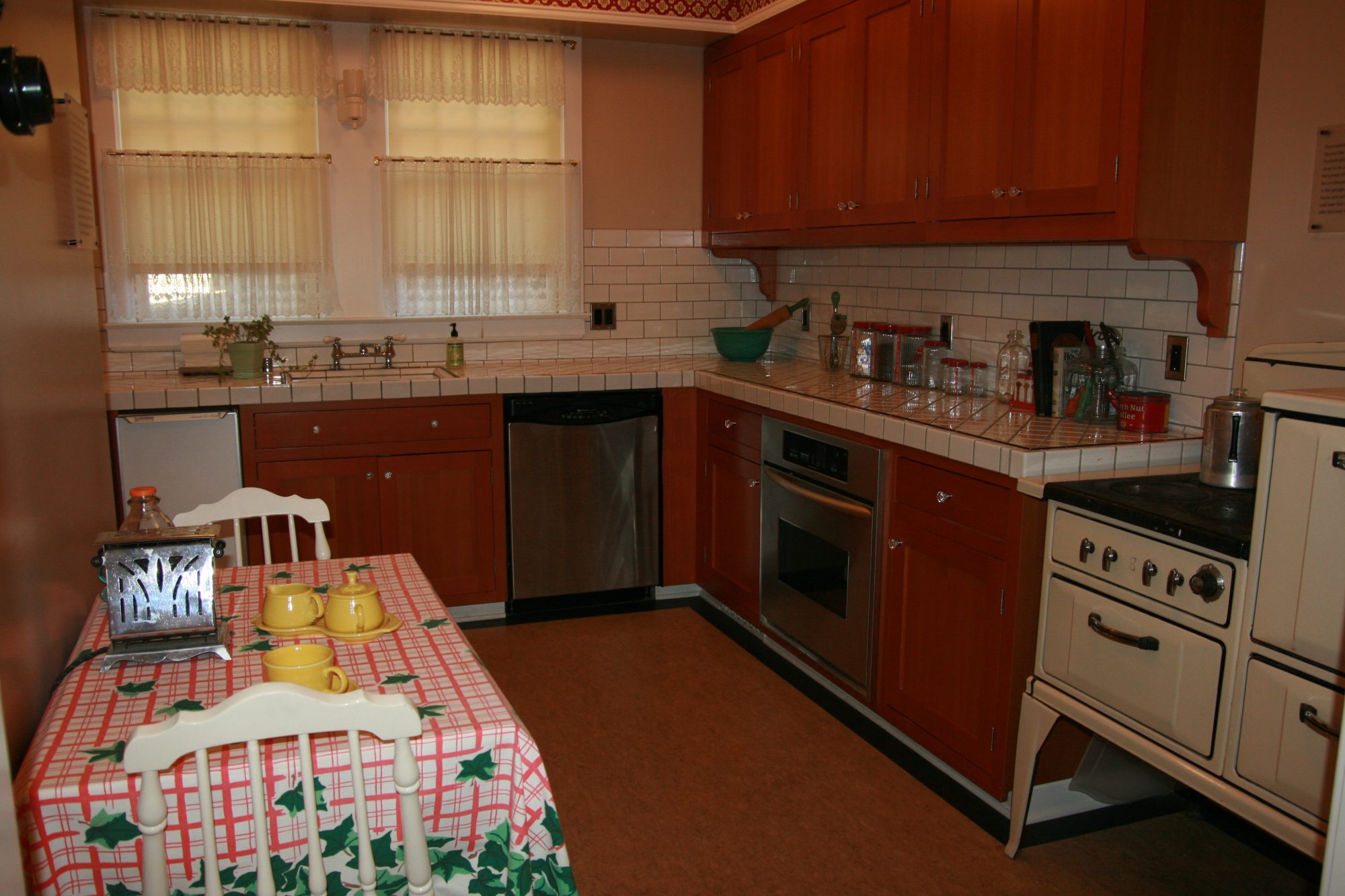 If certain elements of the Hewletts’ kitchen look more modern than retro, that’s because it’s still occasionally used to prepare meals for guests. This mix of food and business has a long history at HP, with a plaque here telling visitors about one of Hewlett and Packard’s earliest collaborators, Norm Neely, shaking their hands around the kitchen table in 1939 and then – with no formal contract signed until 1962 – working with them for the next 45 years. 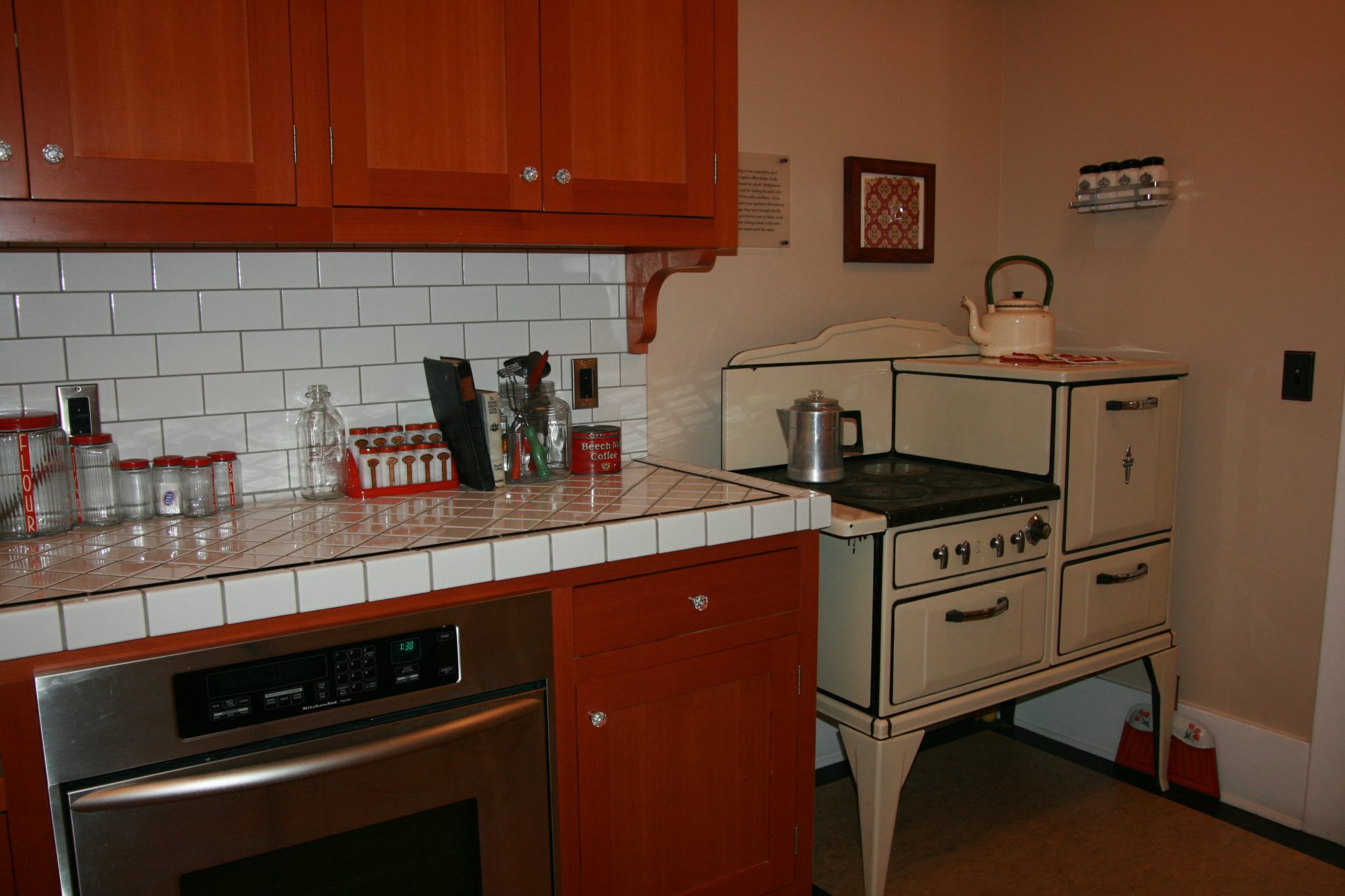 HP employees like to joke that Lucile’s greatest sacrifice was allowing her husband to use her Wedgewood stove to bake paint onto the panels of HP’s first audio oscillators. Apparently nothing cooked in there afterward ever tasted quite right.