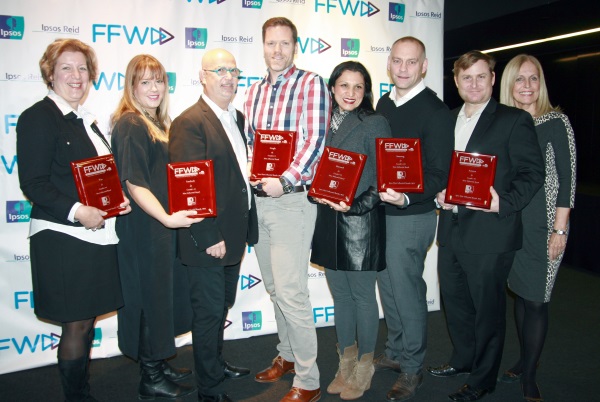 Market research firm Ipsos has released the 2015 edition of its annual list of Canada’s most influential brands, which COO Steve Levy (top) presented on Jan. 26 during ICA’s FFWD Advertising & Marketing Week in Toronto. Once again the top 10 list was dominated by technology-driven companies (some of whom sent representatives to AdWeek to accept the awards, above), and led by the same five tech giants for the second year in a row. Here are the 10 most influential brands, along with their “influence scores,” which ranged from 51 to 440, with 100 as the average.

Influence Score: 201 (twice as influential as the average)
Place on last year’s list: 9
In one word: Innovative

Respondents to the Ipsos survey were asked to choose one word to describe each brand, and for Samsung the answer was loud and clear: Innovation, followed closely by trust.

“Of course, as we as consumers look at what this brand is doing, both in wearables, tablets, in VR, and in the connected hub, it’s not terribly difficult to see why,” Levy said.

Amazon’s influence is defined by its mission statement: “To be Earth’s most customer-centric company where people can find and discover anything they want to buy online.”

It’s a company with a strong future, Levy said, with 40 per cent of Canadians calling it a brand that understands their needs.

One of two companies on the list that aren’t defined by their reliance on tech, this iconic Canadian franchise scored highest among all the brands surveyed for corporate responsibility.

And hey, with the 2014 launch of its TimmyMe mobile app, the company is no slouch when it comes to embracing technology either.

After compiling its list of Canada’s most influential brands, Ipsos interviewed the marketing leaders at each of the top 10, with Walmart’s Sandra Sanderson emphasizing the positive impact the company’s e-commerce arm has had on its bottom line.

“We’ve… continued to make e-commerce a very significant priority,” she said. “Owning that intersection between physical and digital to make it easier for customers to shop at Walmart.”

Influence Score: 223
Place on last year’s list: 7
In one word: There were two – “Trustworthy” and “Innovative”

Visa’s Brenda Woods said the company’s influence is driven by a combination of trust and innovation, such as the company’s contactless payment system, PayWave, introduced in 2007 and now used in some 22 per cent of all transactions.

“We always think of [trust and innovation] together,” she said.

Influence Score: 267
Place on last year’s list: Same
In one word: There were two – “Fun” and “Entertaining”

YouTube only celebrated its tenth anniversary in 2015, yet in that time the company has amassed more than 1 billion users in 70 countries, with 100 hours of video uploaded to the website every minute.

“They’re seen as original, as innovative, as forever having changed the consumer landscape, and as a brand that shapes consumer behaviour,” Levy said.

Part of Facebook’s success in 2015, he said, can be attributed to the company’s successful “social flyer” pilot program, which Facebook has been running with Sport Chek and is likely to offer as a service for other companies in the future.

Microsoft is “a trusted brand,” Levy said. “But it’s also seen as a leading edge brand, and that, after 41 years, is saying something. How many brands stand that test of time?”

In an excerpt from his interview, Microsoft’s Jason Hermitage said, “I think innovation is really the heart of the company… We spend $11 billion as a company on R&D… and that wave of innovation that we keep bringing to market I think is really important.”

The audience laughed when someone remarked that Apple’s “innovative” reputation was closely followed by “expensive.” “But you’re buying them!” Levy retorted.

And that, in a nutshell, is Apple’s appeal – how many other companies are so defined by their innovation and perceived quality that consumers will mob their official store at the Eaton Centre (another picture Levy shared, to laughter) whenever their signature product is updated?

Influence Score: 440
Place on the list last year: Same
In one word: There wasn’t just one – “useful,” “innovative,” “search,” and “informative” all vied for the top

The most influential brand in Canada for the fourth year in a row, Google’s win wasn’t a contest – it was number one across all age groups and across all regions. The fact that respondents couldn’t choose only one word to describe the company illustrates the magic behind its brand, Levy said.

“When [co-founders] Larry [Page] and Sergey [Brin] started the company the focus was on the end user,” Sam Sebastian, Google Canada’s managing director, said in an interview. “Focus on the user, provide the best utility for them, and the rest will follow. That’s still the ethos of the company, and that’s still what we continue to focus on.”