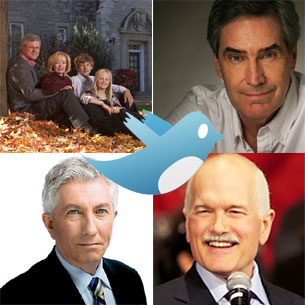 #Elxn41: Canada’s social media election
Canada’s political leaders have taken to social media for campaigning more than ever in this 2011 election. Whether it’s calling each other out on Twitter, blogging about campaign stops, giving rally attendees the boot because of Facebook profile photos, or starting their own social networks – it’s a whole new ball game for the game of political one-upsmanship. 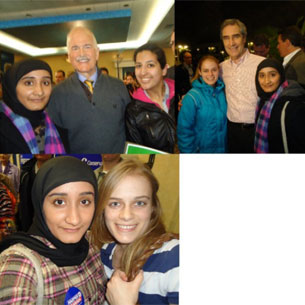 Girl de-friended by Conservatives for Facebook photo
Awish Aslam found herself being given the boot from a Conservative party rally, and her pass torn to shreds in front of her face, all over her Facebook profile picture. The politically curious 19-year-old had a picture of herself with Liberal leader Michael Ignatieff posted, and party officials apparently took exception. The issue later escalated, being mentioned during the leaders debates and Prime Minister Stephen Harper eventually apologizing for the incident. Now, Aslam has created a Facebook Page that features her with both Ignatieff (top right), NDP party leader Jack Layton (top right), and a girl at a Conservative rally. But none with Harper. 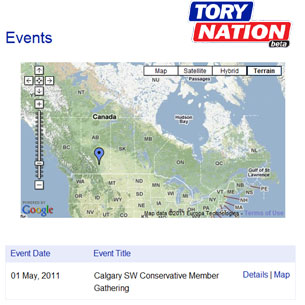 Tory Nation
The Conservative party has created its own social network to help grassroots organizers campaign during the election. Tory Nation is labelled as being in “beta” and allows supporters to create an account, then exchange messages with other right-leaning friends and create fundraising campaigns, organize events or find events (only one in Canada was posted at the time of writing) and invite friends to join. With the campaign in its second half, it’s not clear if this social network will ever exit its beta stage. There’s no sign that the network has been adopted widely, with just a smattering of supporters available over the friend finder. 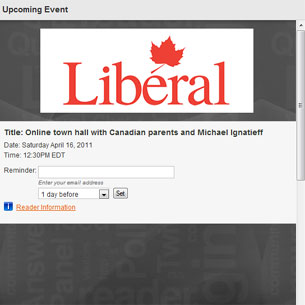 Cover It Live
The Liberal party extended its town halls out from community centres to the online community using Cover It Live. The live blogging tool combines Twitter messages, photos snapped on the spot, and allows the audience to take part by making comments or asking questions. It’s just one example of how the campaigns of all the federal parties are working on a condensed time frame. Whereas past election campaigns catered to a 24-hour news cycle, present-day campaigns must work in real-time. 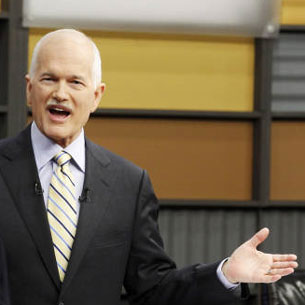 Hash tag fail
The most meta moment of the election campaign so far came from NDP leader Jack Layton slipping into Twitter parlance during the English-language leaders’ debate. The mustachioed leader rated the Prime Minister’s plan for dealing with crime as a “hash tag fail” referencing a popular thread on the micro-blogging social network. None of the leaders replied with an “LOL” or “OMG” but continued the debate jargon free. Twitter users responded to the quip, shooting the quote up into Twitter’s trending topics for hours afterwards. Photo courtesy of Getty Images. 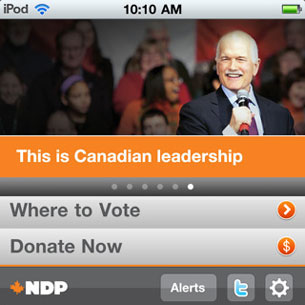 Jack Layton iPhone app
Want to follow everything Jack Layton is doing? There’s an app for that. The NDP leader’s app is available for free from the App Store and delivers news, photos, videos, and campaign tour dates for the leader. It will also inform voters of who their local NDP candidate is and where they can vote on May 2. There’s also a “donate now” feature and integration with Twitter. The Green Party also has a similar iPhone app available for download. 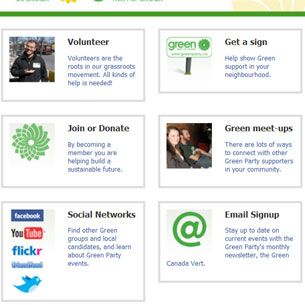 Politicians want you to ‘Like’ them
Each of the major national political parties running in Canada’s 41st election has a Facebook Page. With more than half of Canadians on the social networking site, it’s just too big an audience to ignore. This Green Party page makes a great call to action for those who click “Like” with the ability to sign up to volunteer, put up a sign, meet with other Green party members, and so on. Here’s the fan count for each page as of April 15. Conservative party: 14,495 Liberal party: 14,223 Green party: 9,808 NDP: 1,245 Bloc Quebecois: 261. Note the NDP focuses more on promoting leader Jack Layton’s page. 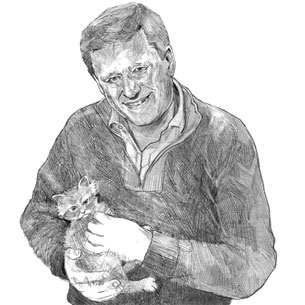 ShitHarperDid.ca
Not all social media campaigns originated from the inner-workings of the politcal parties vying for votes. Viral video campaign and Web site Shit Harper Did was created by young, media-savvy professionals out of Vancouver. The videos are simply produced yet well executed and funny. The site features a drawing of the Conservative leader holding a kitten and looking creepy next to short descriptions about things attributed to his governing, with links to news stories for further reading. The campaign has grabbed national headlines in the mainstream media. 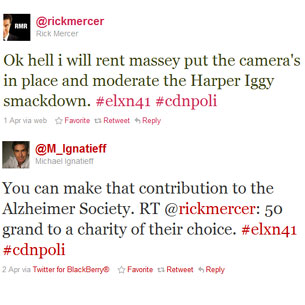 Debate throwdown, Twitter style
After Liberal leader Michael Ignatieff floated the idea of a one-on-one debate with Prime Minister Stephen Harper, and Harper seemed to respond positively to the idea to media, the gauntlet was thrown down on Twitter. CBC TV personality Rick Mercer offered to host the debate at Massey Hall and charge money for tickets, giving the proceeds to charity. “Ok hell i will rent massey put the cameras in place and moderate the Harper Iggy smackdown,” he tweeted. Ignatieff accepted and named the Alzheimer Society as his charity of choice. Harper never responded, and ultimately the debate showdown has not been organized. 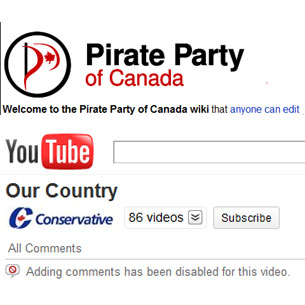 Comfort levels
Many businesses are jittery about diving into social media because it is so easy for consumers to write potentially negative things about them. It’s no different with political parties, and how cautiously some parties are treading compared to others is telling. At one end of the spectrum, the Pirate Party of Canada uses a completely open Wiki as an organizational prong of its party. On the other end, the Conservatives don’t open up YouTube videos to comments.