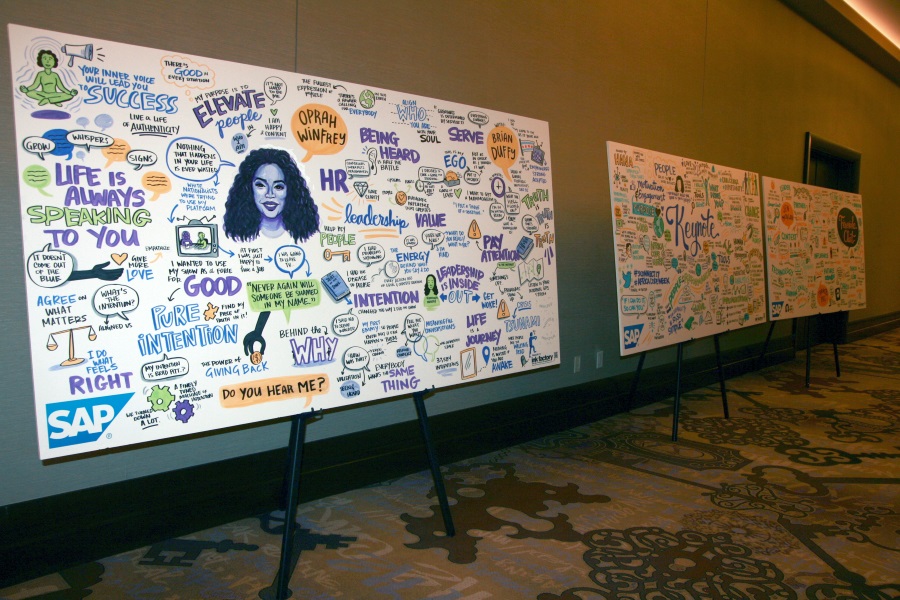 LAS VEGAS, NV. – Another SAP SuccessConnect has come and gone, leaving its Las Vegas guests with enough memories to fill three boards’ worth of drawings (click here, here, and here for larger versions of each). Read on for some highlights. 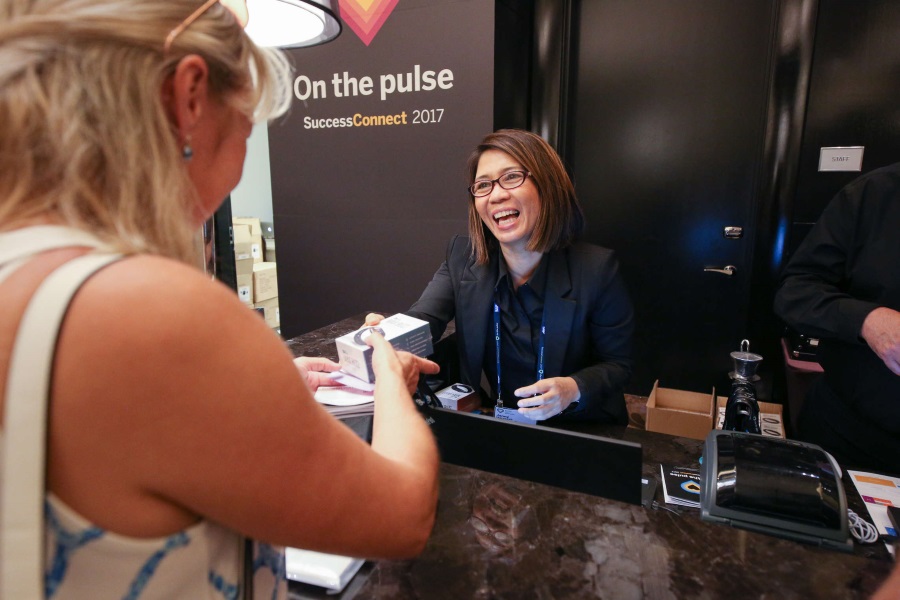 When registering for their badges, SuccessConnect attendees were given a free Virgin Pulse activity tracker, along with a challenge to be the attendee with the highest level of tracked activity. (We confess, we didn’t actually start charging ours until we started writing this story.) 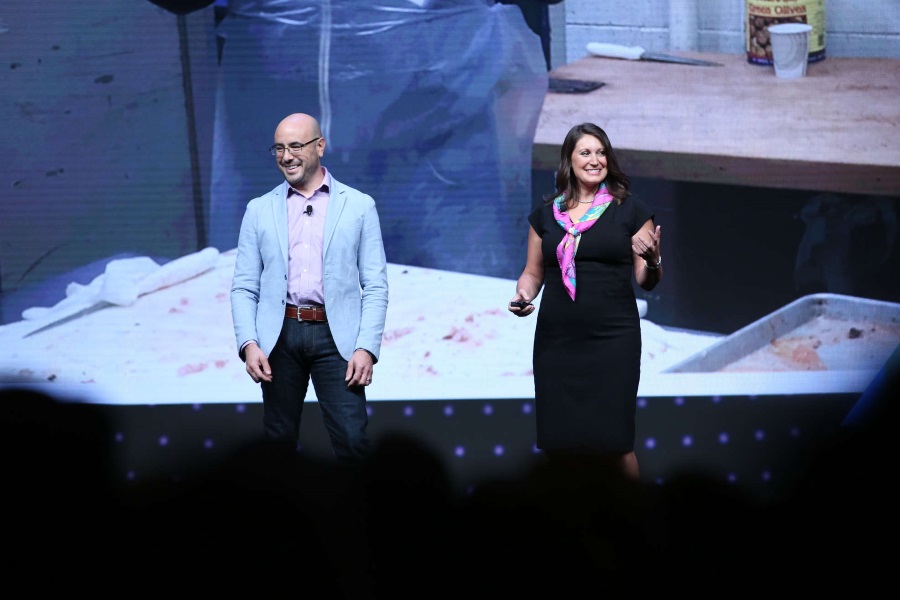 Unlike last year’s conference, few product announcements took centre stage at this year’s SuccessConnect (this year’s London counterpart appears to have stolen its thunder in that regard), though it did feature global head of engineering and cloud operations James Harvey, left, and global head of products Amy Wilson, right, promising that mobile technology, illustrated by a recent Apple Inc.-assisted redesign of its signature SuccessFactors platform, will be integral to SAP’s efforts to digitally transform human resources going forward. (Photo courtesy SAP) 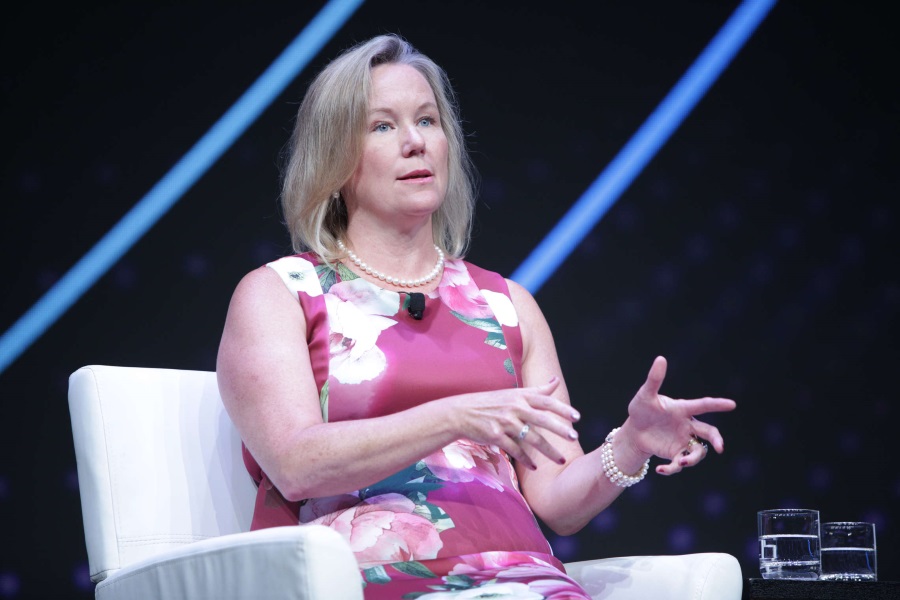 With little news to deliver, SAP invited a series of customers to share their success stories instead – and few of its ambassadors were more engaging than Corning Inc.’s Christy Pambianchi, senior vice-president of HR for the Corning, N.Y.-based company that manufactures Gorilla Glass. 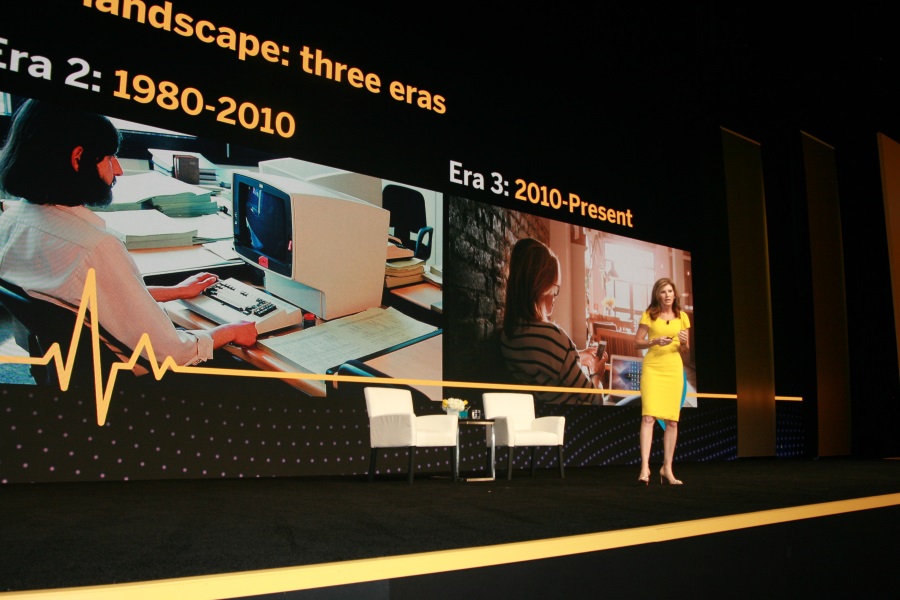 During her appearance before the conference’s second-day keynote, SAP North America president Jennifer Morgan convincingly outlined the three post-WWII eras of employment: Era 1, a period of stability that lasted roughly between 1940 and 1980; Era 2, a period of more connected, less stable, but still corporate-focused employment that lasted roughly between 1980 and 2010; and Era 3, which began in 2010 and has seen career employment replaced with job-hopping and the “gig economy.” 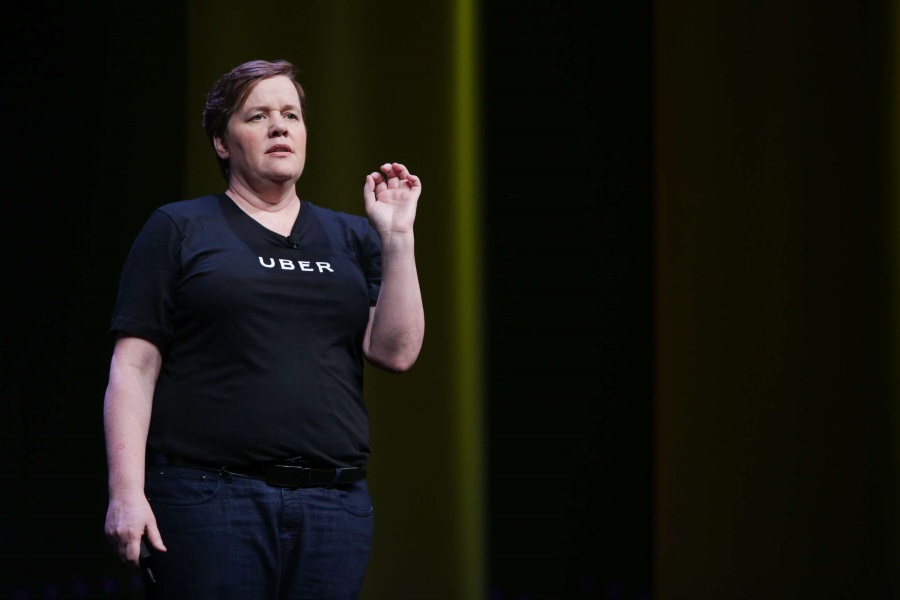 Practicing what she preached, Uber Technologies Inc.’s senior vice president of leadership and strategy, Frances Frei, was by turns witty, ribald, awkward, and funny during a presentation in which the Harvard professor encouraged audience members to build trust by being their authentic selves on the job. 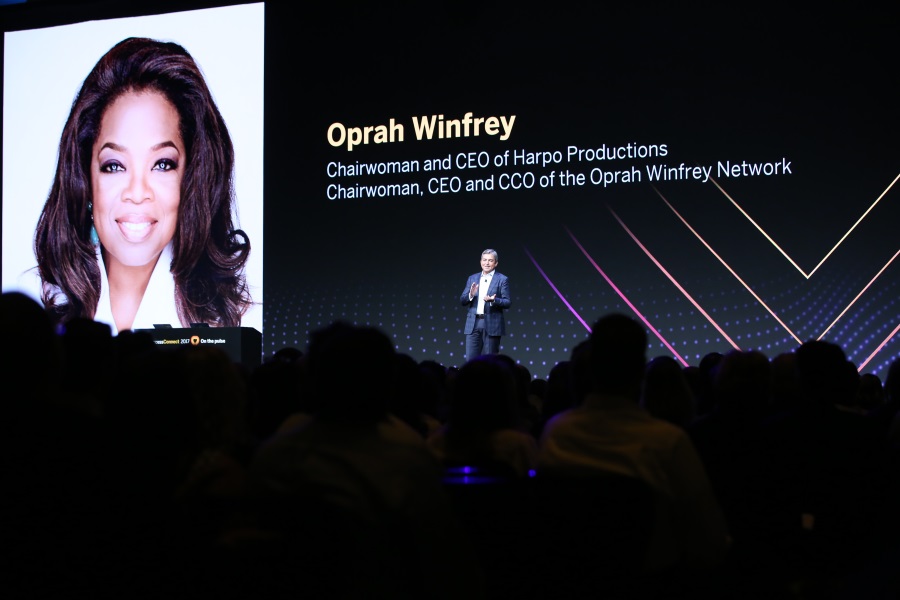 Her 80-minute appearance was preceded by a warning that no recording devices were allowed in the theatre, and her team didn’t allow SAP’s photographers to publicly release any of the photos taken during her presentation, but the highlight for many attendees (including this writer) was the second-day keynote by Oprah Winfrey, who told stories about the moments that have shaped her approach to leadership, and how she’s applied those lessons in her work. (Photo courtesy SAP) 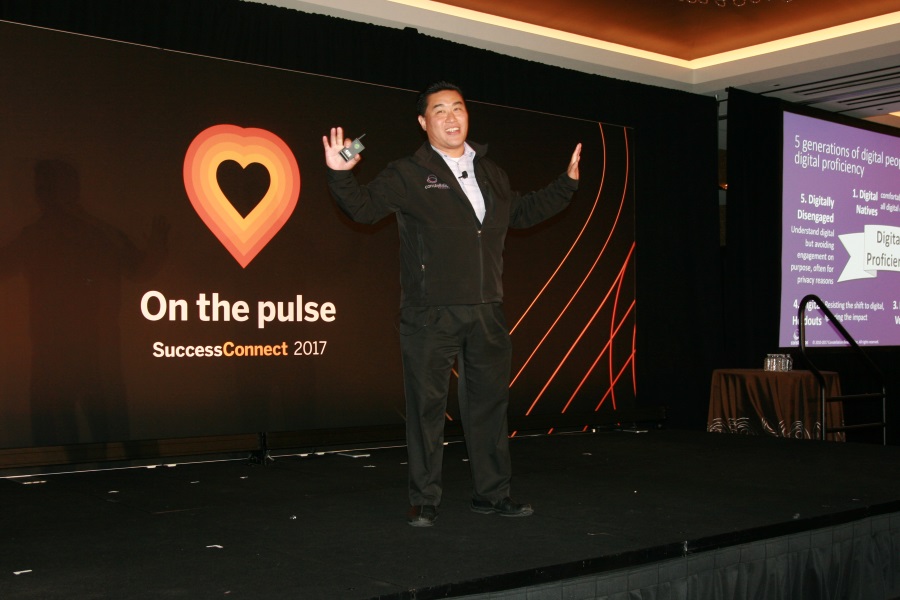 Constellation Research Inc. founder and principal analyst Ray Wang is one of the most followed researchers in Silicon Valley, and watching his second-day presentation on digital transformation, in which he urged companies to tailor their approach to five generations based on digital proficiency rather than age, it was easy to see why. 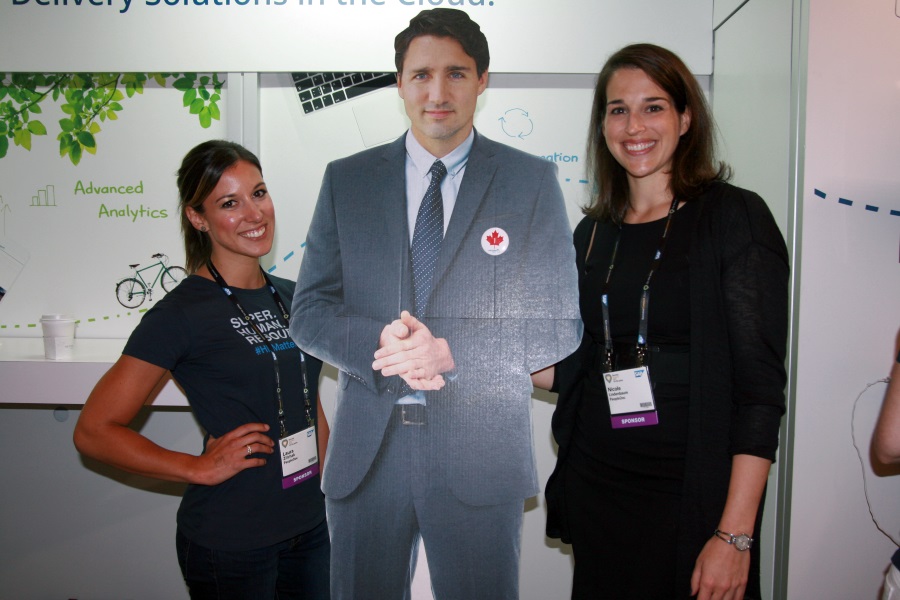 To the likely jealousy of our Trudeau-loving colleague, we’re proud to report that we met Justin himself at the conference – or a cardboard cutout of him, anyway, courtesy of French HR solutions provider PeopleDoc’s Laura Zifchak (left) and Nicole Lindenbaum (right). 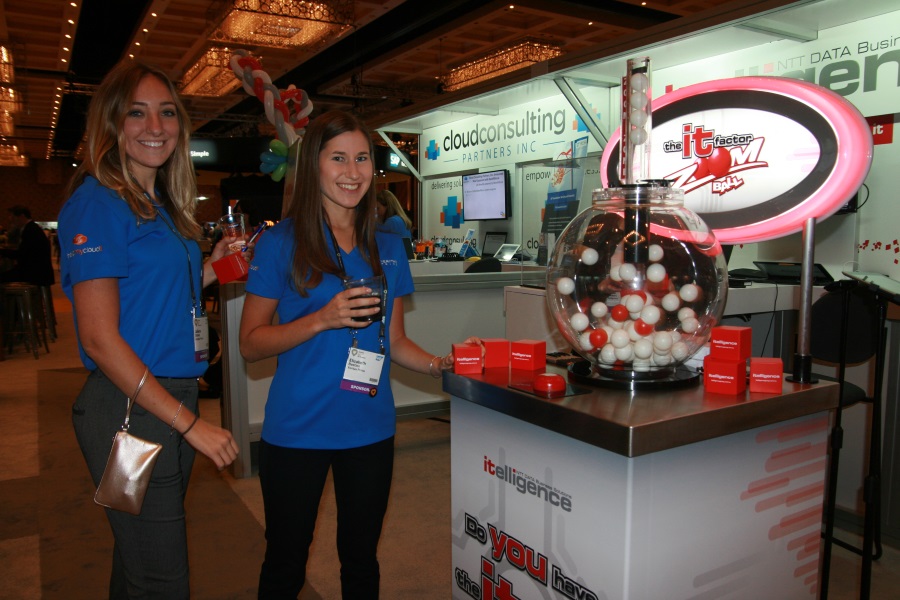 Elsewhere on the show floor, Veritas Prime’s Juliana Stoian (left) and Elizabeth Bastien (left) enjoy a Powerball-like round of ZoomBall, courtesy of German solution provider Itelligence AG: Six red balls in the can would have netted these two $50,000 USD. 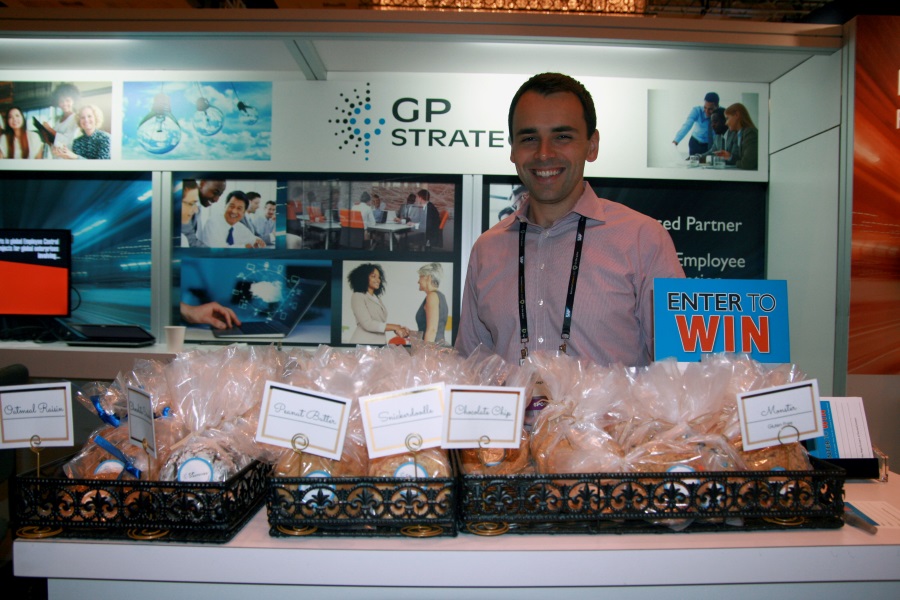 Attendees with a sweet tooth were welcome to visit management consulting firm GP Strategies’ booth, where Brian Dillon would be all too happy to give them a cookie. (We chose Snickerdoodle.) 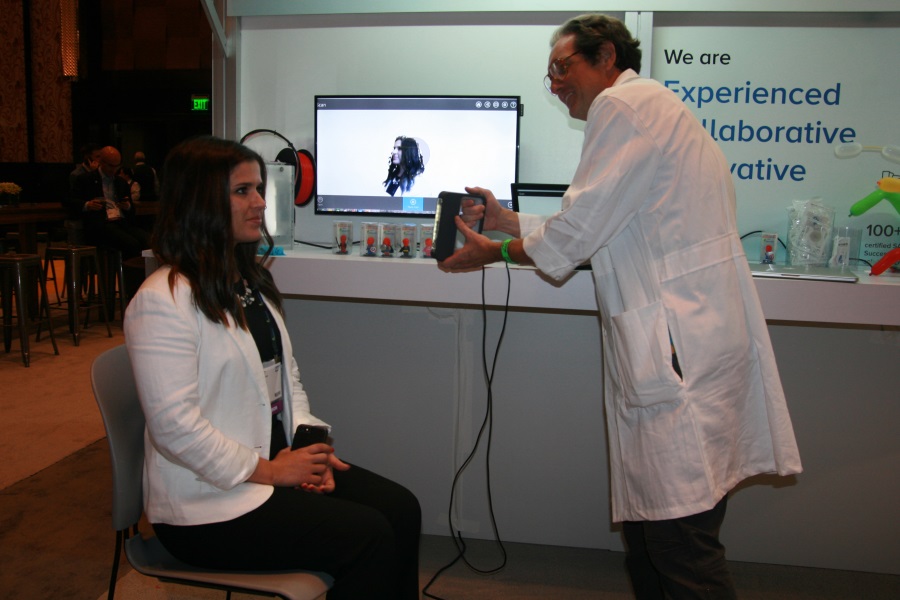 Conjuring memories of the Artec 3D booth at last year’s Adobe Max conference, visitors to Aasonn LLC’s booth such as Aasonn employee Chrissy Caruso could volunteer to have their heads scanned and attached to miniature action figures. 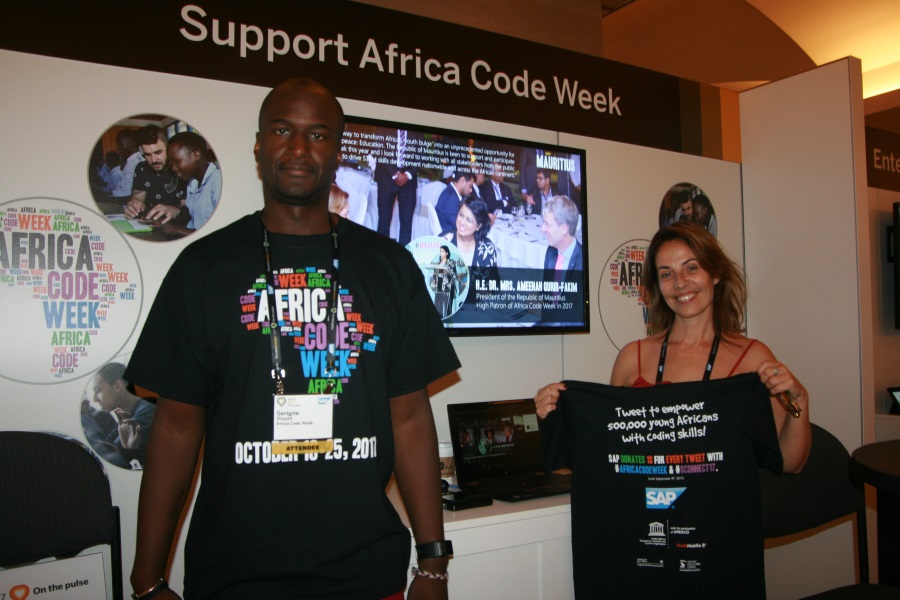 Since last year SAP has sponsored Africa Code Week, which according to the organization’s website helped 426,000 youth across 30 African countries either write their first lines of code or simply touch a computer for the first time last year. During SuccessConnect, Africa Code Week’s Serigne Dioum (left) and SAP’s Claire Gillisen-Duvall were on hand to give attendees free t-shirts and encourage them to tweet #AfricaCodeWeek and #SConnect17, with SAP donating $1 each time the hashtags were used. 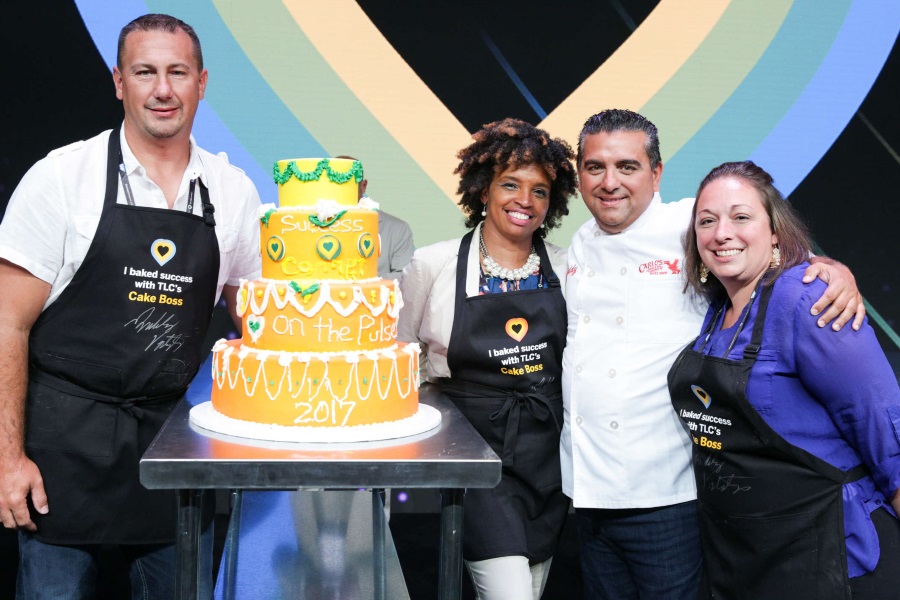 We didn’t attend the closing keynote, featuring “Cake Boss” Buddy Valastro, but heard good things. The fact is, we had a job to do, and if you attend every event arranged at these conferences, you never have time to do it.