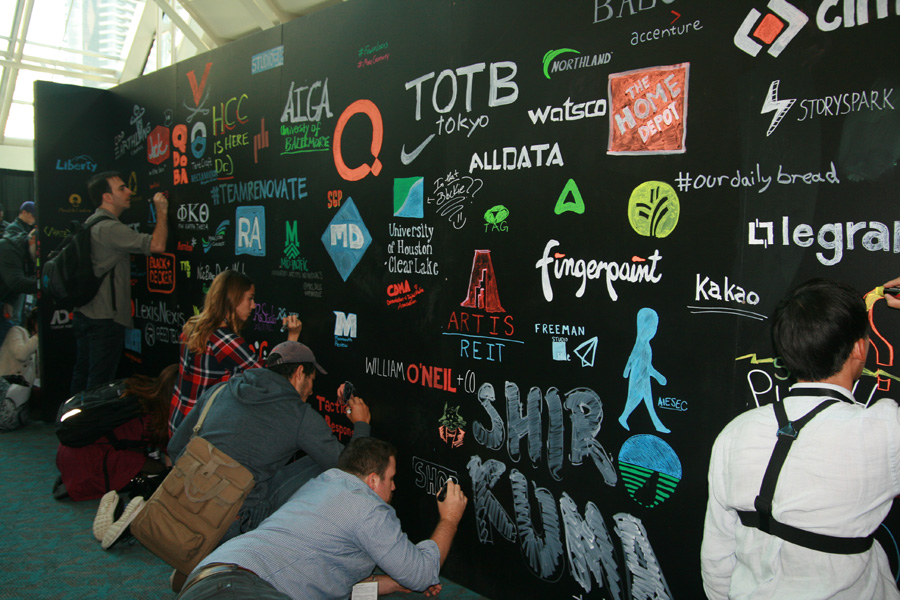 SAN DIEGO, Calif. – This year’s Adobe Max was the creativity software giant’s biggest yet, bringing more than 10,000 attendees to the San Diego Convention Center for two days of inspiring keynotes, flashy product releases, eye-popping demonstrations – and the type of show floor where features like this blackboard were more common than you might expect. Read on. 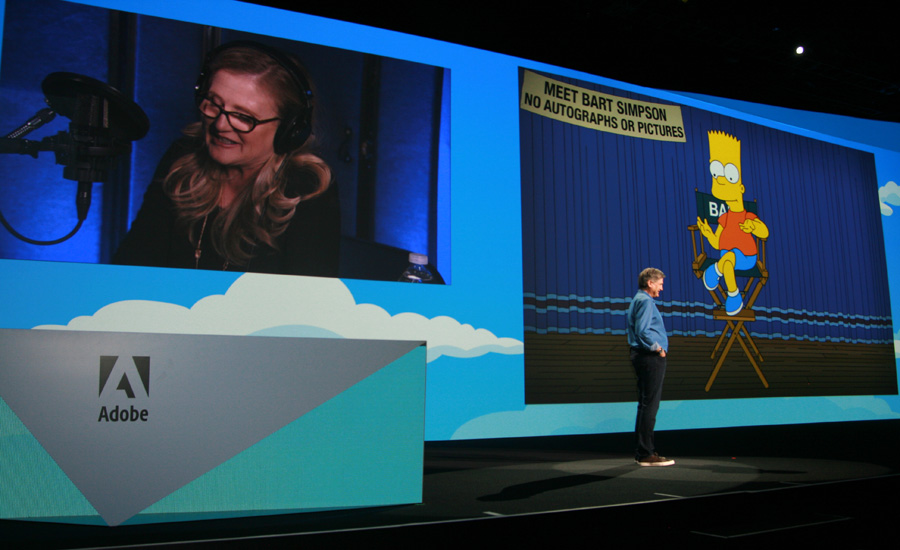 This year’s conference kicked off with a significant new release – Adobe Sensei – followed by demonstrations of key features that by early next year will enhance the full range of Adobe’s signature Creative Cloud platform – including the Character Animator program that brought Bart Simpson to life in front of the audience’s eyes. Find out more here. 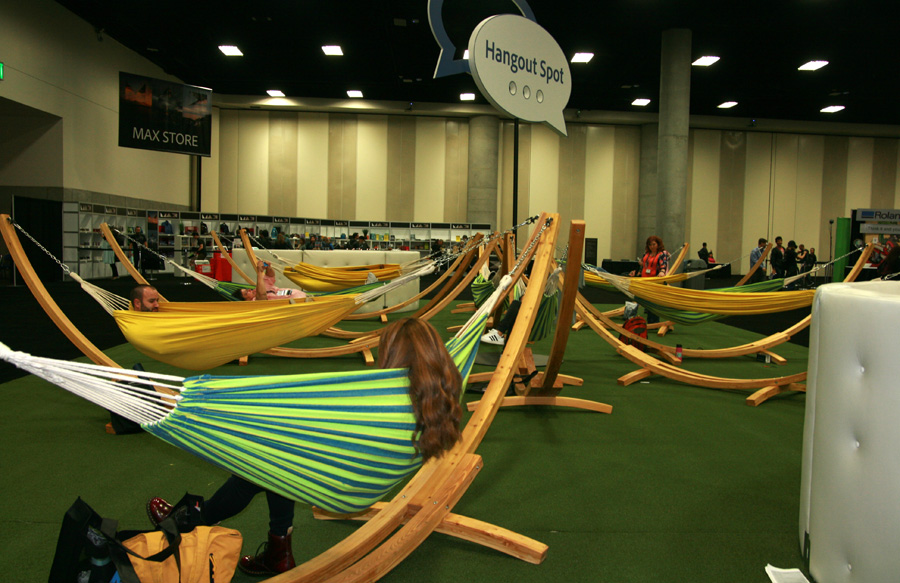 In marked contrast to the majority of conferences this author has attended, the Adobe Max show floor was a roughly even mix of vendors, art installations, and activity areas – or inactivity areas, as the case may be. This particular “hangout spot” was one of several themed locations dedicated to giving attendees the opportunity to nap. 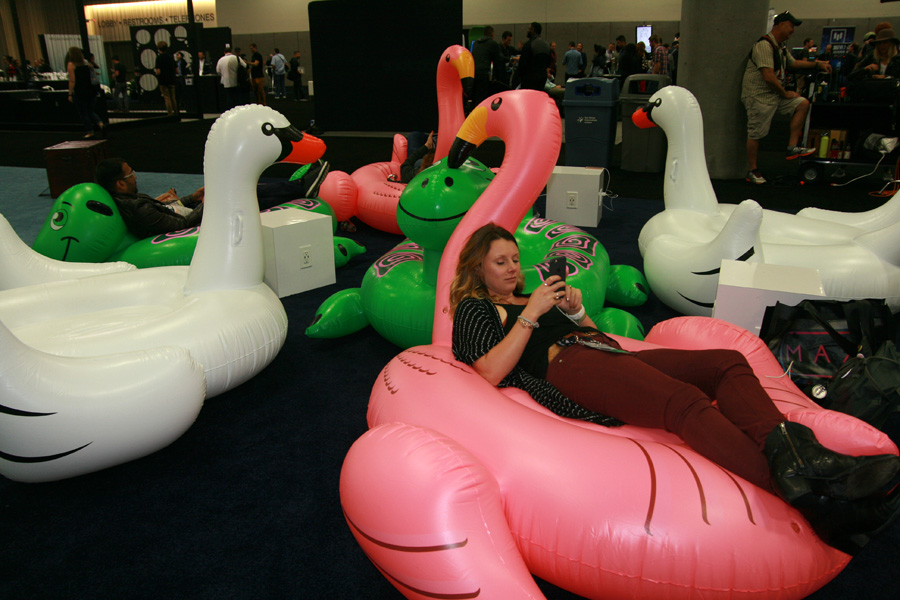 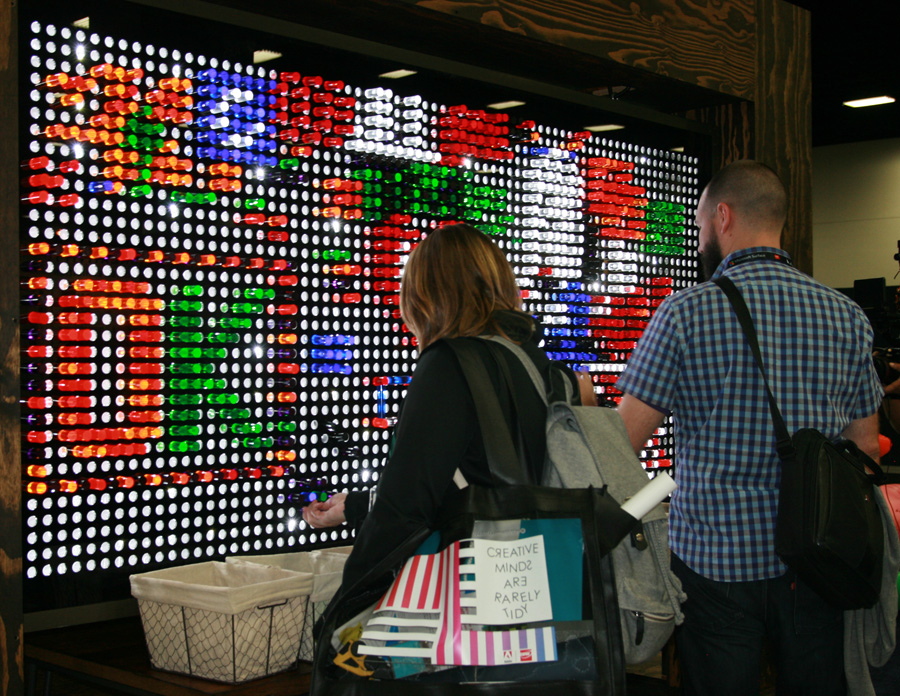 Why was there a gigantic Lite Brite in the middle of the playground area? We couldn’t say. We knew better than to ask. 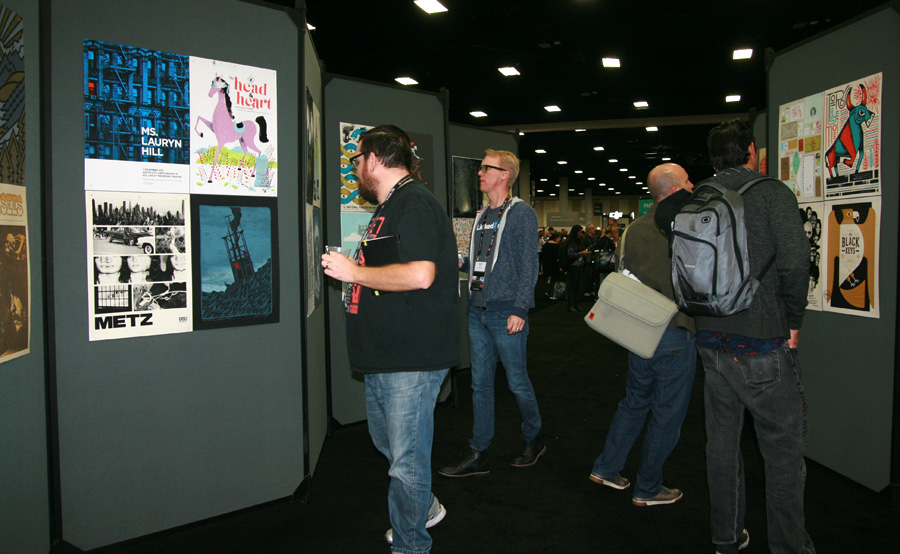 Among the galleries on display – most of which were dedicated to Adobe’s curated stock photo collection – printing vendor the National Poster Retrospectus stood out for taking advantage of Adobe software to produce retro reprints of a wide range of one-sheets, including but not limited to concerts, movies, books, and albums. And each one could be purchased for only $20! 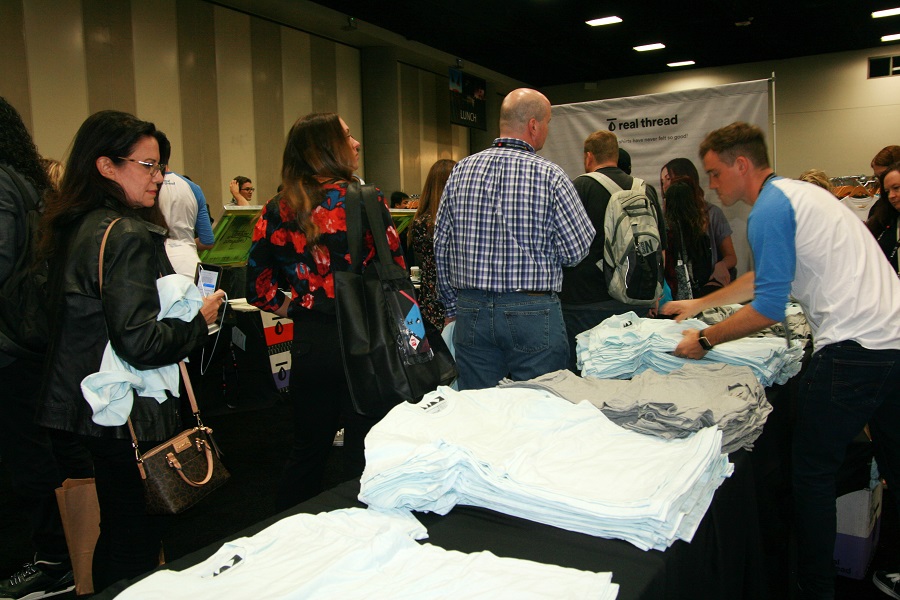 Frankly we don’t quite understand why printing vendor Real Thread had the second-longest lineup on the show floor, beyond the adage that you can make Americans show up anywhere by offering free t-shirts. Visitors could choose from one of two premade designs, which was then printed onto a shirt of their choice. 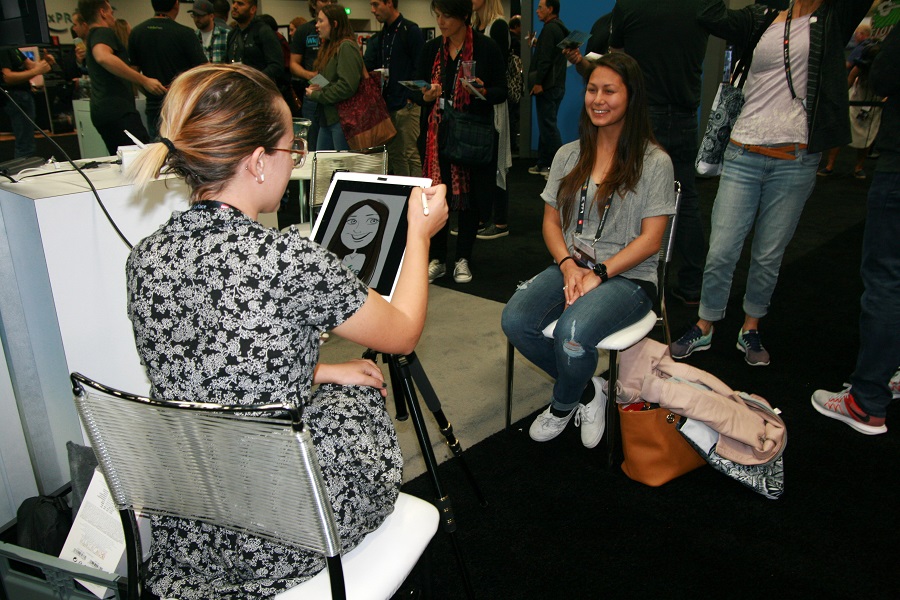 We’ve seen caricaturists at conventions before, but the artist at project management application service provider Wrike’s booth representied the first time we’d seen one using a tablet – equipped, naturally, with Photoshop so she could colour her masterpiece in. 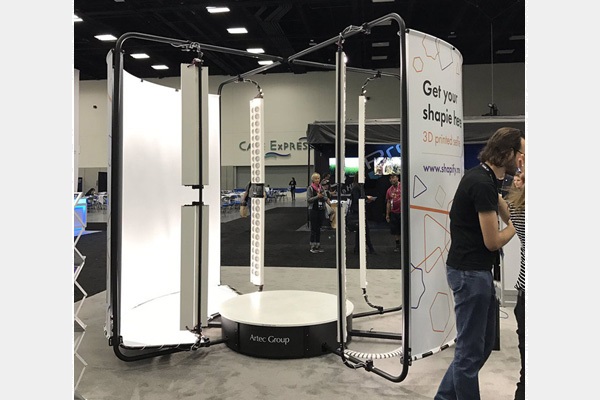 We’ll be honest – like everyone in the show floor’s longest line, we were too busy stepping into Artec 3D’s full-body scanner to actually shoot a picture of the thing (our source). In the perfect win-win situation, attendees were added to the company’s vast library of available bodies for movie, television, and video game crowd scenes – and in return were promised action figures based on the scans. 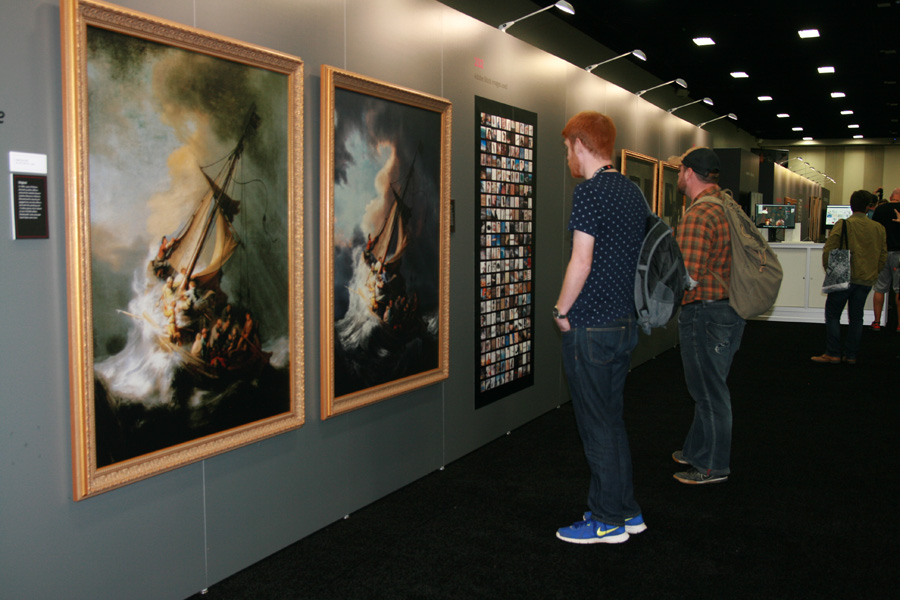 An installation even its guide called “lunacy,” the “Lost Masterpieces” project invited artists to use Adobe stock images to recreate lost paintings – in this case, Rembrandt’s “The Storm on the Sea of Galilee,” which Ankur Patar recreated using 232 stock images, and no brushes – over a period of two or three weeks. 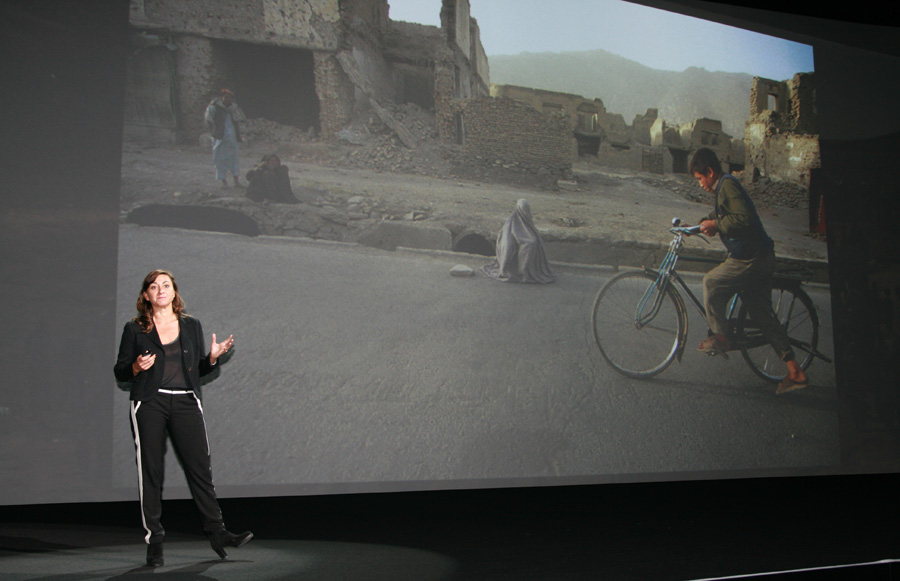 Quentin Tarantino is one of our favourite directors, and his appearance at Adobe Max’s day-two keynote was appropriately unforgettable, but it just didn’t pack the emotional punch of photojournalist Lynsey Addario, who talked about covering some of the world’s worst disaster zones since 2000, including Haiti, the Republic of the Congo, Darfur, Iraq, and Afghanistan (shown here). 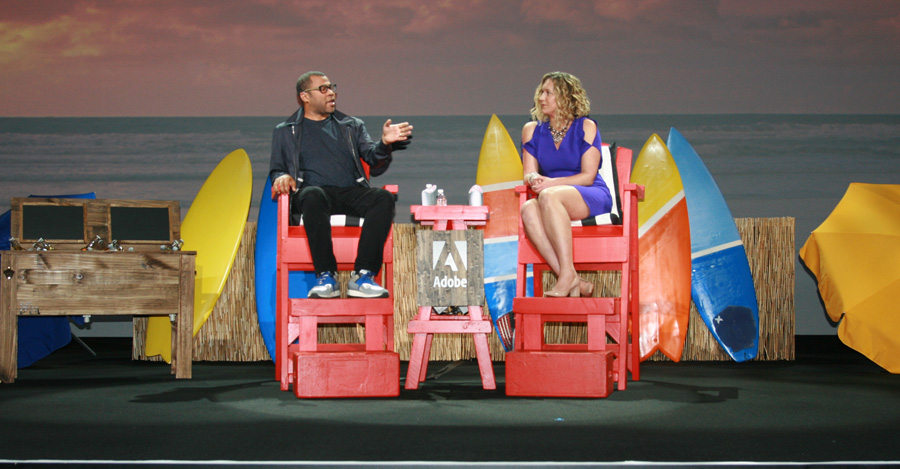 One highlight of any Adobe Max conference is the company’s Adobe Sneaks event, which is typically co-hosted by a luminary from the entertainment industry (comedian Jordan Peele in this case, who was joined by Adobe community engagement manager Kimberley F. Chambers) and invites a dozen or so of the company’s engineers to show off some of the eye-catching new features they’ve been working on – a vocal fabrication tool, for example, which creator Zeyu Jin used to make a recording of Peele’s frequent comedy partner Keegan-Michael Key say something the real Key would likely never say (outside of a sketch, anyway). 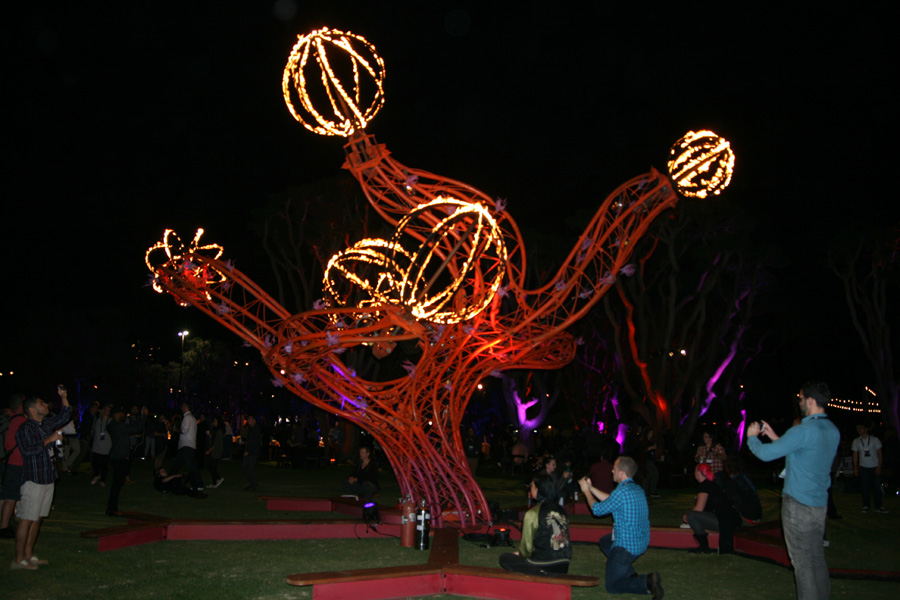 How do you throw a party for 10,000 people? If you’re the organizers behind Adobe Max, you rent out San Diego’s Embarcadero Marina Park South, fill it with food trucks, alcohol, luminescent art installations, hire the Mowgli’s and Alabama Shakes to entertain the crowds, and step back. 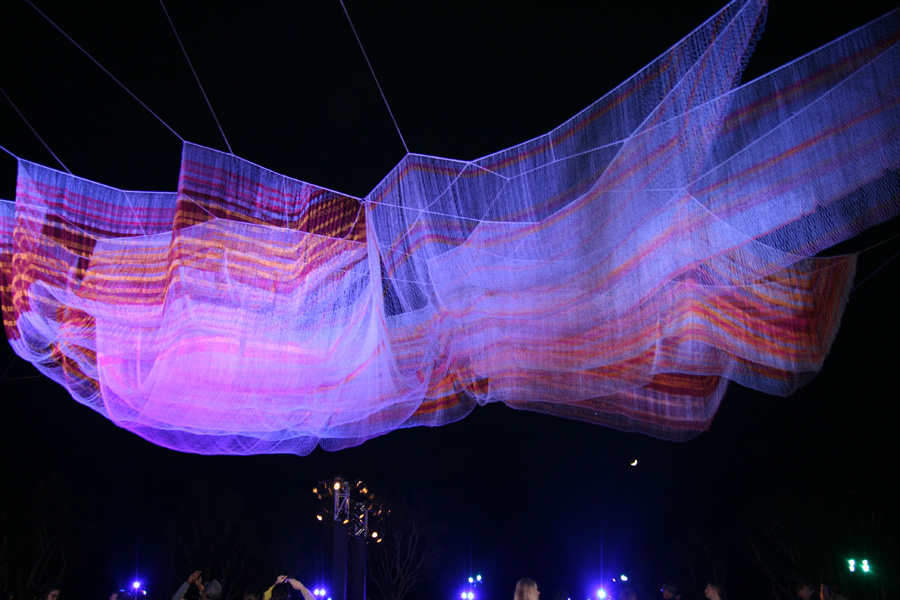 Our favourite installation came from one of the day-two keynote speakers, Janet Echelman, who specializes in colourful freeform sculptures made from fibreoptic cables and suspended by hand-woven rope.