8 iPad productivity tools you need to have 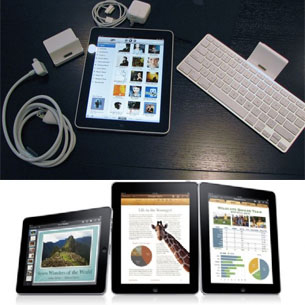 8 iPad productivity tools you need to have
The iPad isn’t just for consumer-driven entertainment people also want iPads so they can be more productive. Already great iPad productivity tools have emerged, chief among them, Quickoffice and Dropbox.Some apps straddle work-life balance, such as Evernote, which can be used to take both personal and business notes and voice memos.

Then there are a few cool iPad productivity apps that you’ve probably never heard of, and one piece of hardware that will help you replace that clunky old laptop with a sleek new tablet. 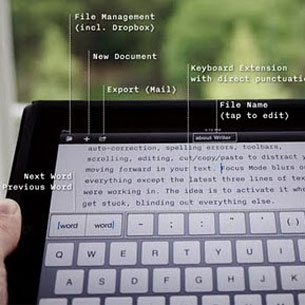 iA Writer
At some point, most everyone needs to write a lengthy document if not the great American novel, then a report, memo or other directives. If you need to write something longer than a 140-character Tweet, use the iPad app that most writers prefer, iA Writer ($1).

iA Writer strips all the frills of formatting and word processing and lets you focus on the words in standard Courier type (think: typewriter). The virtual keyboard is set up to make common punctuation easy without having to switch to the symbols keyboard. Arrow keys help you navigate around the document. br />
Another cool feature: focus mode, which dims all the words except for the three lines you’re working on. That way, you can make those words really sing. Reading-time and word count indicators on the upper right corner keep track of the document’s length. The only feature this app doesn’t have is a way to get around writer’s block. 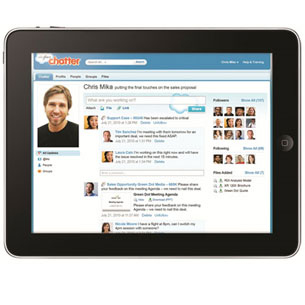 Salesforce Chatter lets users post status updates, pictures, links, even PowerPoint presentations, as well as updates on projects and sales deals. They can create business profiles that highlight work experience and include graphics that show performance.

Salesforce Chatter keeps executives up-to-date on the latest sales-related happenings, as well as what’s on the minds of the movers and shakers in their industry. Users can also search out people with related business interests in the hopes of growing their network and finding potential customers. 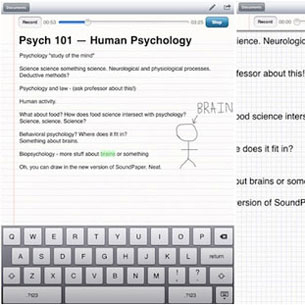 SoundNote
Chances are you’ve sat in corporate meetings frantically scratching notes on a pad of paper. It’s not very efficient, and you’ve probably missed important details. This method of note-taking has been going on for generations. There’s got to be a better way.

Now there’s SoundNote for the iPad ($5), which not only lets you take notes and drawings but records audio of the meeting.

The best part of the app: While an audio recording backs up your notes, you won’t have to look forward to hours of listening to the recording and maybe even transcribing to find missed details. Just tap on a word, and you’ll jump to the proper place in the audio track. 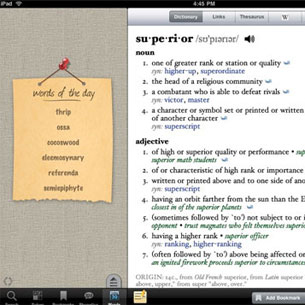 WordBook
Are you searching for the right word in an important email? Have you run across a word whose meaning eludes you? It probably happens all the time, especially on the iPad where reading books and Web articles is a mainstay of the device.

WordBook XL – English Dictionary & Thesaurus on the iPad just might be the best $3 investment on the App Store. Quickly look up words and learn their meanings, or use the thesaurus to find the perfect word. You can bookmark words that you might want to use later.

Even if you’re not a wordsmith or voracious reader, WordBook helps you avoid gaffes that can make you look foolish. (Who can forget Sarah Palin’s use of the word “refudiate”?) The app has a neat pop-up spelling engine that helps you find the correct spelling of words. 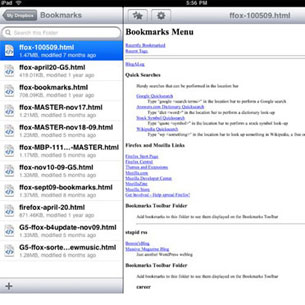 Cloud Storage: Dropbox
Dropbox is a cloud storage service. There are other services out there, such as MobileMe, iDevice, SugarSync and Box.net (which is more geared toward enterprises). But I like Dropbox because of its simplicity. It’s just a file folder in the cloud.

To get started, you’ll need to download the Dropbox app and create an account at Dropbox.com. I suggest you do this on your Mac or PC first. There’s a three-tiered pricing plan based on the amount of storage: 2GB (free), 50GB ($10 per month), and 100GB ($20 per month).

Next, you’ll want to download the Dropbox app on all of your computers (laptop, iPad, iPhone, Android, BlackBerry) using the same Dropbox account name. The free apps simply allow you to access your file folder and view its contents, including streaming music and movies stored in Dropbox. You can also access your file folder by going to the Dropbox.com Web site and logging in.

You can move files into Dropbox on your laptop by simply dragging and dropping them inside the Dropbox file folder. Any new file or changes you make to older files inside Dropbox are instantly encrypted and uploaded to the Dropbox server and viewable on any device with a Dropbox app (assuming, of course, you have an Internet connection).

Tip: A blue icon appears next to the file during this process and turns into a green check mark once it’s completed.

One of the great features of Dropbox is the ability to share folders with other Dropbox users. Right click a folder in Dropbox, go to Dropbox in the menu, and select Share This Folder. A Web page will open that lets you enter recipient email addresses, inviting people to have access to the folder. The folder will appear in their Dropboxes.

You can also share individual files with non-users. Right click the file in Dropbox, go to Dropbox in the menu, and select Copy Public Link. Then paste the link in an email and send to the recipient. 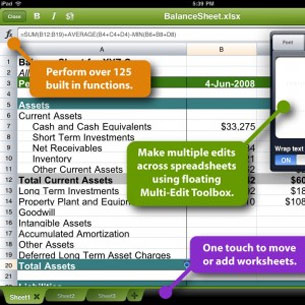 Quickoffice Connect Mobile Suite
Viewing Dropbox files on your iPad is fine, but what if you need to work on them? You will need an iPad productivity app. While Apple’s (AAPL) office productivity tools (Pages, Numbers, Keynote) work pretty well, most people still use Microsoft (MSFT) Office. There are a few mobile Microsoft Office apps, but my favorite is Quickoffice Connect Mobile Suite for the iPad($15).

Quickoffice lets you create (or open), edit and save Excel spreadsheets, Word documents and, as of earlier this month, PowerPoint slides on your iPad. Like most mobile apps, Quickoffice lacks the full functionality of the desktop version of Microsoft Office. But Quickoffice has been closing this gap.

One of the coolest Quickoffice iPad features is its tight integration with Dropbox and other cloud storage service providers. 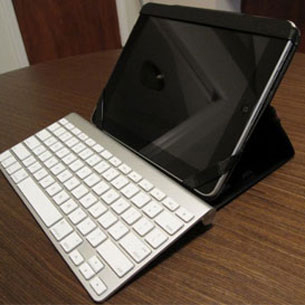 The keyboard requires two AA batteries, which lasts an amazingly long time. The keyboard powers down when not in use and automatically starts up as soon as your fingers touch the keys.

However, this presents a problem: The keyboard often turns on accidentally, which signals the nearby iPad to fire up via Bluetooth. The workaround is to turn off Bluetooth on the iPad when you’re traveling.