It’s finally over. Yesterday the only country whose elections still have the power to reshape the world chose its next president – and just like the past four months of accusations, information leaks, corruption charges, and plain old mud-slinging, the end to the depressing battle between Hillary Clinton and Donald Trump – already household names before the election started – played out on Twitter.

Such a beautiful and important evening! The forgotten man and woman will never be forgotten again. We will all come together as never before

Before we close the book on the 2016 U.S. election, however, here’s a recap of 10 tweets that defined the campaign (only five of them from Trump!). 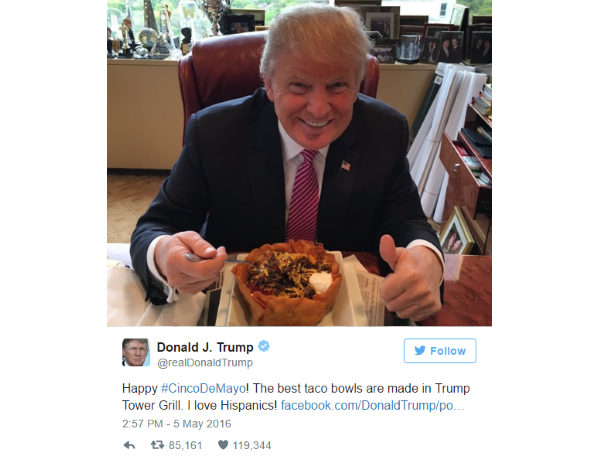 We had to crop this one for spatial reasons, but you can find the original here. Trump’s blatant pandering to the people he spent his first speech insulting is one of the most retweeted posts of his campaign. We wonder why. 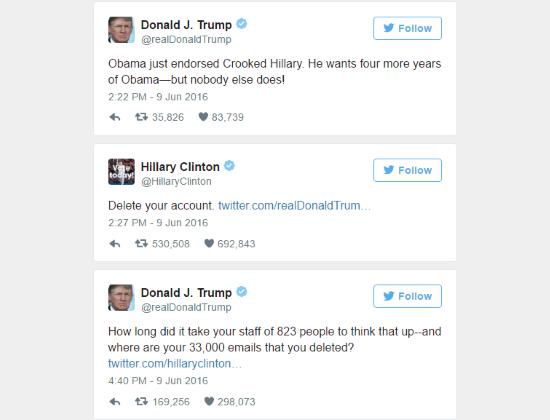 We’re not sure that Clinton’s response to Trump’s first tweet is an ideal illustration of Michelle Obama’s proclamation that “when they go low, we go high,” but the second and third posts in the above Twitter chain were their respective candidates’ most liked and retweeted posts of the 2016 campaign.

Appreciate the congrats for being right on radical Islamic terrorism, I don’t want congrats, I want toughness & vigilance. We must be smart!

After a shooter killed 49 people and wounded 53 others at Pulse, a gay nightclub in Orlando, Florida, on June 12, Trump’s response among the outpouring of sympathy was a tweet thanking his followers for their support. Not that placing himself and his personal feelings at the centre of a tragedy is new territory for him:

“@realDonaldTrump: I would like to extend my best wishes to all, even the haters and losers, on this special date, September 11th.”

Mr. Khan, who does not know me, viciously attacked me from the stage of the DNC and is now all over T.V. doing the same – Nice!

I was viciously attacked by Mr. Khan at the Democratic Convention. Am I not allowed to respond? Hillary voted for the Iraq war, not me!

Few moments during the election (except, possibly, the leaked Access Hollywood video, and the New York Times uncovering how Trump could have used a $916 million USD loss to avoid paying taxes for 18 years) appeared to cost Trump more supporters than his tirades against Khizr and Ghazala Khan, the parents of a Muslim-American soldier killed in Iraq. 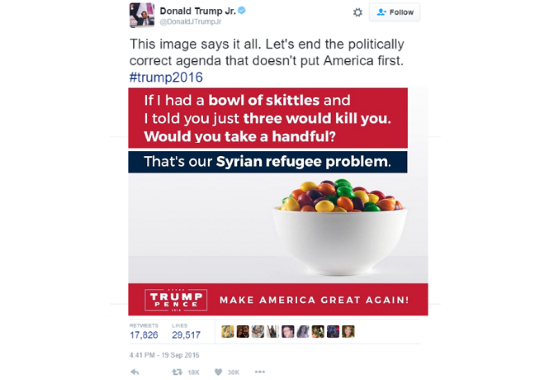 We had to reconstruct this, since Donald Trump Jr. has removed the image from his original post, but this comparison of Syrian refugees to Skittles arguably prompted the oddest statement of the campaign: “Skittles are candy. Refugees are people. We don’t feel it is an appropriate analogy,” a representative from manufacturer Wrigley said.

Did Crooked Hillary help disgusting (check out sex tape and past) Alicia M become a U.S. citizen so she could use her in the debate?

“A man you can bait with a tweet is not a man we can trust with nuclear weapons,” Hillary Clinton said during her July 28 acceptance speech at the Democratic National Convention – and however clumsily, she illustrated Trump’s gullibility during the first presidential debate by interrupting moderator Lester Holt to bring up Alicia Machado, a former beauty queen (and, not coincidentally, Clinton supporter) whom Trump had called “Ms. Piggy.”

She even had the video to prove it.

Trump, on the other hand, during a 5 AM tweet storm, could only direct his followers to a sex tape that doesn’t exist.

I’m a Muslim, and I would like to report a crazy man threatening a woman on a stage in Missouri. #debate

During the second presidential debate on Oct. 10, Trump responded to a question about Islamaphobia by saying that Muslims who come into the country must “report when they see something going on.” Soon after a hashtag, #MuslimsReportStuff, took off. (It should also be acknowledged that Clinton’s answer, in which she called American Muslims “part of our homeland security,” wasn’t much better.)

.@HillaryClinton I’m with you but please stop saying my value to the country as a Muslim American is national security. #debate 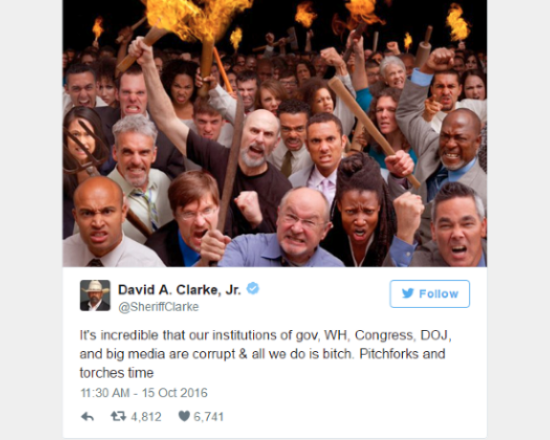 We’d laugh at this one, but we’re not certain Milwaukee County sheriff David A. Clarke (or former Illinois congressman Joe Walsh, who tweeted that if Trump loses “I’m grabbing my musket”) was joking.

FBI Dir just informed us “Based on our review, we have not changed our conclusions that we expressed in July with respect to Sec Clinton”

FBI director James Comey may have changed the course of the election when, less than two weeks before voting day, he released a widely-disseminated message saying the bureau had discovered a new batch of Clinton-related e-mails, thanks to an unrelated investigation into the ex-husband of one of her top aides.

Then, after a marathon session (which, it should be noted, NSA whistleblow Edward Snowden said could have been completed in a matter of hours), it was announced two days ago that the FBI had once again turned up nothing… on Twitter.

.@MELANIATRUMP to say u will stand for “anti-bullying” is hypocrisy. Your husband is 1 of the most notorious bullies we have ever witnessed.

Melania Trump’s Nov. 3 speech proclaiming that she would combat bullying as first lady was roundly criticized both on social media and off, but as avowed Little Monsters, we’re going with Lady Gaga’s response.