Those already buying Promoted Video and Promoted Tweets on Twitter can now click on a button that will also launch those ads onto the Twitter Audience Platform. There, the ads will reach an audience across a network of mobile apps. Ad formats include video, native ads, banners, and interstitials.

The ads that appear in mobile apps will give those viewing them the opportunity to retweet or favorite the item directly within the app. There’s also a call-to-action button that can be edited by the advertiser.

Twitter says that it has seen brand advertisers that ran campaigns on both Twitter and the platform improve their reach by as much as double, and lower the cost per engagement. A study it commissioned with MediaScience shows that consumers spent about 123 per cent more time with the ads compared to traditional interstitials. It also increased positive sentiment towards the advertiser.

Twitter’s move to extend its reach beyond just its own social network is likely driven by the fact it just doesn’t have as many users as some of its competitors. Statistica.com puts Twitter at about 316 million users and while that’s nothing to scoff at, it is well behind Facebook’s 1.5 billion users. That’s not even counting Facebook Messenger users (700 million) and Instagram users (300 million). Since many mobile apps tie-in to Twitter’s API to take advantage of the social virality it can offer, tagging on to that to create a mobile ad network made sense.

Given the growing interest in mobile ads as a format, Twitter might have found a business model it can build on. 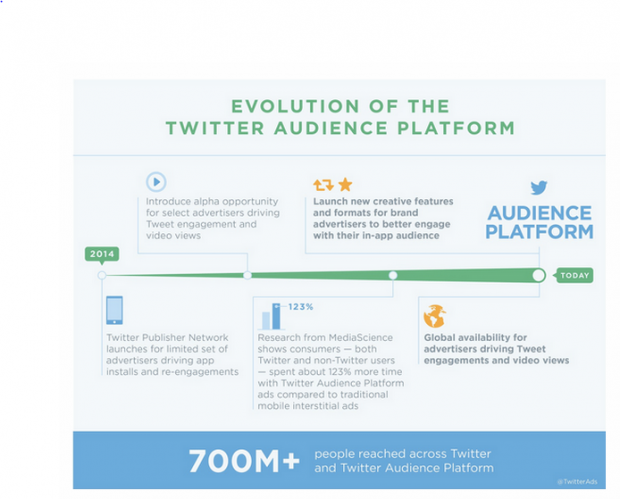