As described in the warning from the Canadian Internet Registration Authority: “In this particular scam, a caller, claiming to be associated with CIRA, asks for information about the user’s computer. The caller then guides the user through a process that ultimately provides the scammer remote access to the user’s computer and the information located on its hard drive.”

CIRA is asking anyone contacted by the scammers to not cooperate and report them to the Canadian Anti-fraud Centre.

The technology industry has been used previously by scammers to gain the trust of Canadians. Microsoft Canada issued a warning in May 2012 about a scam involving callers that would claim to be from Microsoft support, then request credit card information and remote access to the victim’s computer.  As a response to the scam, Microsoft launched an awareness campaign with the Royal Canadian Mounted Police. It included this infographic: 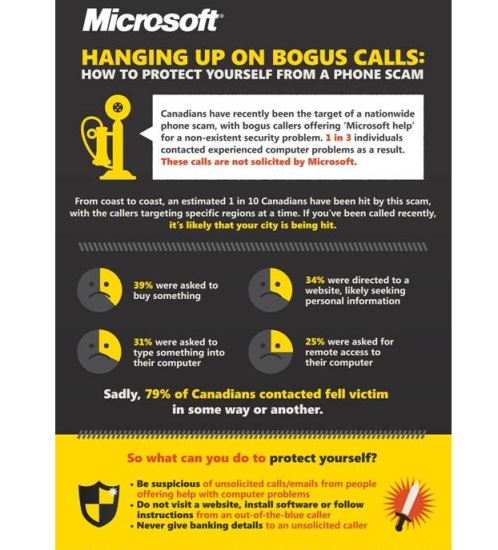 What’s surprising about the Microsoft assessment is that almost eight in 10 of people contacted by the scammers bought the story and were negatively impacted. To avoid becoming a victim of phishing – where hackers try to lure information out of you by pretending to be from a legitimate source – computer users should never trust an incoming request for information whether its by phone or e-mail. For example instead of accepting at face value a caller is from CIRA, it’d be a good idea to hang up and call back CIRA directly at its support number. Be especially wary of anything that’d open up your computer to be accessed by another person. If you didn’t call tech support for a problem you’re actively experiencing, its pretty unlikely any company would just be calling to see if they can help you solve something that might be occurring.