Americans won’t be the only ones deal-hunting on the weekend that marks the beginning of the Christmas consumer frenzy, according to eMarketer – Canadians are planning their shopping strategies too.

Research from IPG Mediabrands forecasts how this coming weekend will be approached by those north of the border: 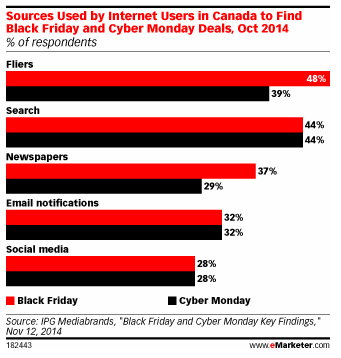 It makes sense that traditional publishing channels such as newspapers and fliers would advertise Black Friday deals to Canadians, as the objective of most literature is to get people into stores, not onto websites. But it’s surprising to see fliers crack the top three ways Canadians are finding out about Cyber Monday events. While marketers seem to be making good use of established online channels like search and email, more could be done online. Channels such as social media or online video could represent an untapped resource for marketers looking to drive awareness of online deals.