Your mobile apps are sluggish in the summer heat, too

Despite the many advanced and/or questionable functions provided by today’s apps, they still rely on radio waves, which fluctuate during the summer thanks to the increased traces of water vapour in the air.

The result: signal loss, which Apteligent estimates leads apps to run about 15 per cent more slowly in warm weather than cold.

“We had suspected this,” Apteligent co-founder and chief strategy officer Andrew Levy tells ITBusiness.ca. “That’s why we ran the analysis – and we’ve seen it also come out in results that included both the northern and southern hemisphere… to confirm that there is indeed latency difference between seasons.” 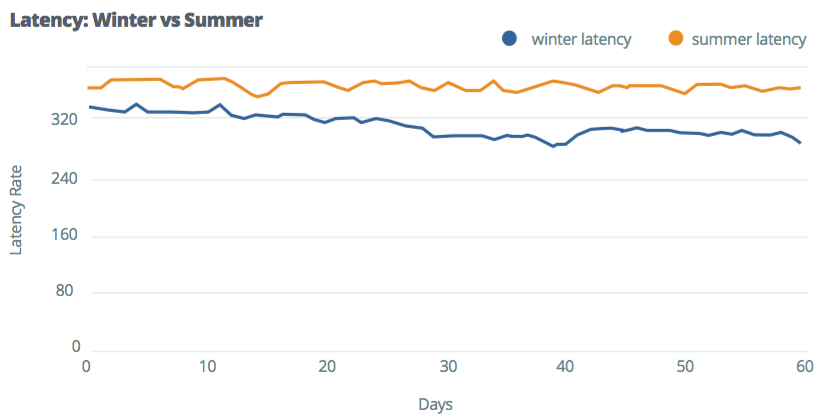 While the precise difference between a latency rate of 330 and 370 is difficult to illustrate, if you compare your phone’s Internet connection to a pipe in your home, higher latency means that more water is leaking as it travels from the reservoir to your faucet; and the more it leaks, the harder it becomes to maintain a steady flow.

Whether a 15 per cent difference is significant or not, Levy says, often depends on the application you’re using.

“On some mobile apps it’s extremely visible to a user – if you’re trying to download or stream some media and you’re sitting there waiting while it’s trying to load,” he says, noting that some developers have become skilled at masking it.

“Instagram is famous for letting you take a photo and while it’s uploading in the background, you choose a filter,” he says. “That way the user experience seems much better, because by the time you’re done the photo is ready and uploaded.”

Another option is transferring key features offline, Levy says: Google Translate, for example, allows users to download language packs, so they can still access the service while travelling in another country without risking high roaming fees.

To conduct the study, Apteligent’s researchers recorded app use on more than half a billion devices over a period of six months, three in summer and three in winter, often by recording which buttons users tapped, which screens they were viewing, and which stages of the experience were frustrating, and why.

Levy noted that some of the most severely impacted apps were those that you might associate with summer anyway, such as travel, hiking, or hospitality apps, or were accessed in locations with remote connections to begin with.

“The developers of these types of apps might want to think that as they’re sitting in their labs in Vancouver or Toronto it may work great, but they need to realize these things are used out in the field, and they need to account for connectivity issues,” he says. “Or they may choose to deploy a content-delivery network to augment their media capabilities in regions where users may be further away from the servers they own.”

Eric Emin Wood
Former editor of ITBusiness.ca turned consultant with public relations firm Porter Novelli. When not writing for the tech industry enjoys photography, movies, travelling, the Oxford comma, and will talk your ear off about animation if you give him an opening.
Previous article
Looking back at HP’s history of spinoffs, acquisitions, and roads newly travelled
Next article
Steve Nash and other Canadian disruptors on how to play hardball