American women trust blogs above social media and are more likely to buy something recommended on a blog, according to a new study from BlogHer Inc.

The Belmont, Calif.-based publisher released its fifth annual Women and Social Media Study today. It shows that while woman prefer Facebook for keeping up to date on personal news from friends and family, blogs are seen as a better way to learn about new products and help make decisions about what to buy. Sixty-one per cent of active blog readers say they’ve made purchases based on blog recommendations, which is nearly twice the number who’ve done the same on Facebook (33 per cent) and Twitter (31 per cent). 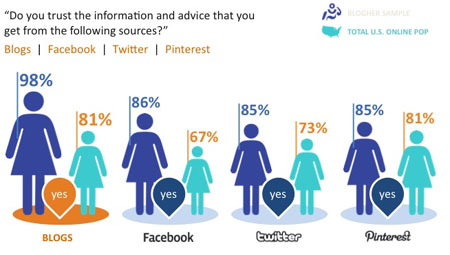 Blogging precedes social media channels as a Web publishing platform, and businesses are often encouraged by marketers to build their presence on social media networks to engage with consumers and monitor their reputation. But this study shows there’s still good reason to put resources into blogging, and the medium has not been eclipsed by social media.

“After five years of conducting this study, reviewing campaign-based statistics on purchase intent and lift, and watching our own network grow, BlogHer knows that there’s no one a woman trusts more for advice, recommendations and guidance than another woman in her circle,” said Lisa Stone, BlogHer Co-founder and CEO, in a press release. “Given the concentration of engaged users who will act on what they learn reading blogs, there is no more efficient use of marketing dollars online today.” 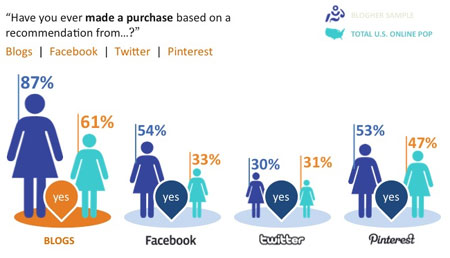 The findings are based on two samples – a general U.S. population group of 1,011 women and 500 men; and a sample of BlogHer network audience members of 1,060 women and 21 men.