Women entrepreneurs to be thrown in Dolphin Tank

Canada’s flagship IT business organization is hoping to launch a series of Dragons’ Den style pitch events for women tech entrepreneurs modeled on a similar initiative in the U.S.

The Dolphin Tank events have become successful with female entrepreneurs in the U.S. The name is a playful reference to the U.S. TV show Shark Tank, which is basically an American version of the CBC series Dragons’ Den. While Shark Tank and Dragons’ Den feature both men and women pitching their ideas to (sometimes snarky) investors, Dolphin Tank events are aimed at female entrepreneurs and try to be more supportive than sarcastic.

“Instead of that negative, intimidating approach (of sharks), dolphins work together. It’s about networking and a positive approach to supporting women-led businesses,” said Emily Boucher, executive director of Canadian Women in IT (CanWIT), a branch of the Canadian Advanced Technology Alliance (CATA) devoted to advancing women in thetech industry. 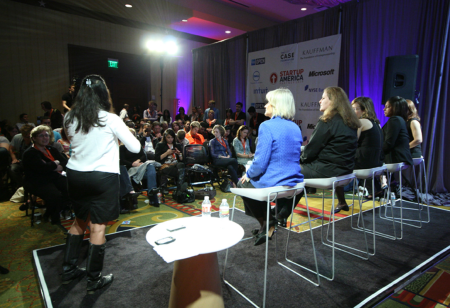 Female entrepreneurs pitch ideas to investors at a Dolphin Tank event in the U.S.

“I want to see how we can bring (Dolphin Tank) to Canada here startingin Atlantic Canada in the fall,” Boucher added.

No specific dates or locations for the Canadian Dolphin Tank eventshave been firmed up yet. But Boucher will be in New York City on July25 and 26 to see how a Dolphin Tank event unfolds firsthand as she mapsout a vision for CanWIT’s Canadian version. Dolphin Tanks were startedin the U.S. by Springboard Enterprises, an American company that helpswomen entrepreneurs get financing. CATA originally teamed up withSpringboard back in 2005 to help get CanWIT off the ground.

Bringing Dolphin Tank north of the border is just one part of some bigchanges at CanWIT. The organization launched a restructuring processtwo weeks ago with Boucher as the new executive director and CatherineAczel Boivie as its new chair and CEO. And while CanWITformerly had anexecutive committee, it’s now accepting nominations until July 31 for anew advisory council of nine to 12 women from the IT field.

The restructuring is partly aimed at recruiting a fresh crop of youngermembers to CanWIT.

“(Membership) hasn’t grown as much as we’d like in the past few yearsand part of that is awareness, especially in the Generation Y group,”Boucher said.

She stressed that CanWIT’s veteran members will still have a key roleto play, particularly in giving insight and advice to those GenerationY recruits. New CEO Aczel Boivie is an example of the leadership’s deepindustry roots. She’s the founding president of the Chief InformationOfficer (CIO) Association of Canada and recently retired from dualroles as CEO of Inventure Solutions and senior vice-president oftechnology at Vancity. In February she was named one of Canada’s 100most powerful women at the WXN Top 100 Vancouver Summit.

Another goal of the restructuring is to shift CanWIT more towards afocus on “business skills and commercialization,” she said. Mentoringand networking activities have featured more prominently at the groupsince it was founded seven years ago. CATA and CanWIT are alsoreteaming with Springboard on a crossborder program to help femaleentrepreneurs in Canada and the U.S. get financing for their ventures.

Christine Wonghttp://www.itbusiness.ca
Christine Wong has been an on-air reporter for a national daily show on Rogers TV and at High Tech TV, a weekly news magazine on CTV's Ottawa affiliate. She was also an associate producer at Report On Business Television (now called BNN) and CBC's The Hour With George Stroumboulopoulos. As an associate producer at Slice TV, she helped launch two national daily talk shows, The Mom Show and Three Takes. Recently, she was a Staff Writer at ITBusiness.ca and is now a freelance contributor.
Previous articleOnboardly launches as ‘a startup for startups’
Next articleeSight’s high-tech goggles restore sight to the vision impaired [video]