The Canadian Radio-television and Telecommunications Commission’s (CRTC) new wireless code that came into effect at the end of 2013 is having a positive impact on overall Canadian satisfaction with their wireless provider, according to a new J.D. Power survey.

Perhaps that’s because wireless phone bills have dropped on average by $7 per month since last year and maximum contract lengths are now two years instead of three years. The J.D. Power survey examines customer perceptions of their wireless provider’s service and was conducted in October 2013 and March 2014 of 12,474 mobile service customers.

Most of the surveys for the study would have been conducted before Rogers, Bell, and Telus announced price hikes in most regions across Canada by $5 earlier this year. An entry-level plan for the big three carriers is now $80 per month. The finding that consumers were paying less on average for their monthly cell phone bill surprised Howard Maker, the Commissioner of Complaints for Telecommunications Services (CCTS).

“Most people I’ve spoken to seem to be saying the opposite, that prices have gone up,” he says. “one of the results of the wireless code is that device prices have been going up.”

Overall satisfaction with carriers in Canada was up 14 points to a score of 705 out of 1,000. But standalone providers – with a brand that doesn’t offer other types of service like Internet or TV – score much better than the full-service providers that include Rogers Communications, BCE Inc., and Telus Corp. On average, overall satisfaction in the full-service carrier segment averages 694, compared to a score of 744  for the stand-alone segment. That difference can be explained by different customer expectations, says Adrian Chung, account director at J.D. Power.

“There’s a different customer base in a different demographic, leading to different expectations of service,” he says. “You might have a teenager living at home versus someone that’s running a household.” 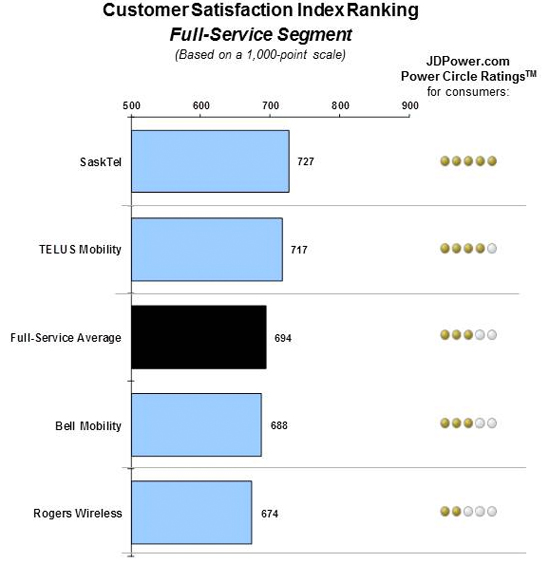 Many of the brands in the standalone segment are owned by a larger incumbent wireless provider. For example, Koodo Mobile, scoring highest in satisfaction ratings with a score of 778 is owned by Telus Corp. Solo Mobile and Virgin Mobile are owned by Bell, and Fido is owned by Rogers. Telus also recently acquired Public Mobile. The independently-owned providers include Mobilicity and Wind Mobile, both at the bottom of the stand-alone category with scores of 728 and 727 respectively. But 727 is also the top score in the full-service category, achieved by Sasktel.

“With Wind at the bottom, they’re in line with the likes of Fido,” Chung says. “If you were to mix them in with the incumbents, they’re tied with Sasktel.” 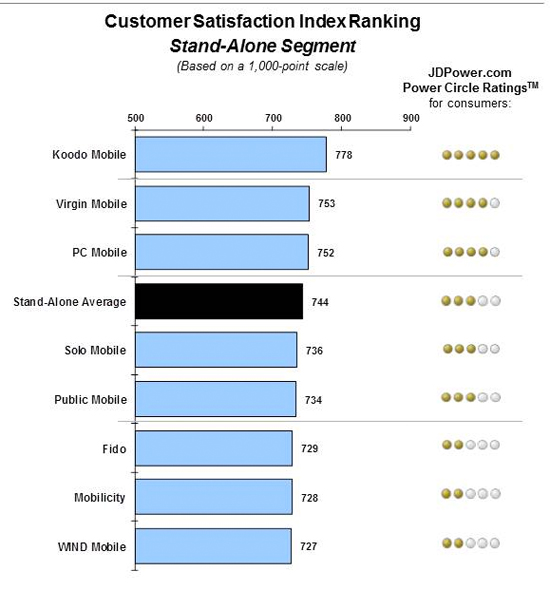 Maker says the higher satisfaction scores line up with what he sees at the CCTS, which is the commission charged with hearing complaints from Canadians about their wireless phone providers and working to find solutions. Overall the CCTS has been seeing fewer complaints made lately. Telus, the incumbent with the highest rating from J.D. Power, also receives the fewest complaints compared to other incumbents.

“They made it very public that their objective is to improve their customer experience,” he says.

While the new wireless code means a better deal for Canadian wireless customers, Chung says it could result in financial strain on carriers. They may have to look at money-making opportunities from other products such as data plans for tablets to make up the losses.

“That means less dollars in the pockets of carriers,” he says. “That’s a big change for carriers and a bit of a challenge for them.”

“In terms of revenue, I don’t think any carrier has really been challenged by ratings because of the demand for service,” Chung says. “The plans are changing and the monthly dollar fee is less. Bell and Telus would have seen more subscribers as a result.”