In the report, Forrester determined that not enough people were aware of VR or planned to purchase a VR device to be worth most marketer’s budget. It projected that only a meager two per cent of the U.S. population would have adopted smartphone-based VR by this year, and about one per cent would have adopted more dedicated high-end VR headsets. That dichotomy represents the two options that consumers have had for VR experiences thus far; either they can sandwich their smartphone in a cardboard or plastic viewer, or break the bank on buying a high-end PC and peripheral attachment like Oculus or HTC Vive.

Google’s Daydream platform, first introduced in 2016, tried to split the middle between these two experiences with a comfortable plastic headset that offered a remote controller, designed at first for the Pixel smartphone and later opened up to more models. Today at CES, it’s announced an expansion of the platform by working with OEM partners. It’s also talking about a new aspect of the Daydream VR platform, WorldSense, that adds awareness of the user’s physical movements in real space to the virtual experience.

The Lenovo Mirage Solo offers a dedicated headset that aims to be as portable and easy to use as the Daydream headset, but works independently from a smartphone. In a written announcement, Google Vice-President of Virtual and Augmented Reality Clay Bavor explains why the new hardware is more immersive thanks to the WorldSense technology developed by Google.

“It’s based on years of investment in simultaneous localization and mapping, and it enables PC-quality positional tracking on a mobile device without the need for any additional external sensors,” he says. “WorldSense lets you duck, dodge and lean, and to step backwards, forwards, and side to side, unlocking new gameplay elements that bring the virtual world to life. WorldSense tracking and Mirage Solo’shigh-performancee graphics mean that the objects you see will stay fixed in place just like in the real world, no matter which way you tilt or move your head.”

The Mirage headset is slated for a second-quarter release. It weighs 645 grams, and the LCD screen is simlar to a high-end smartphone display at 5.5 inches, supporting a 2560×1440 resolution. It’s powered by a Qualcomm Snapdragon 835 processor, offers 4 GB of RAM, an on-board memory of 64 GB expandable via a microSD slot, and Wi-Fi connectivity. There’s also a 3.5mm headphone jack.

Also coming out from Lenovo is the Mirage Camera, which is an example of what Google is branding as VR180 cameras. Google says these dual-lens cameras will take 3D photos in wide angle formats, at 4K resolutions. The images captured in this way can be viewed with the Mirage Solo and other Daydream platform devices. Or a 2D version can be viewed on a typical mobile or desktop screen.

“VR180 cameras are simple and designed for anyone to use, even if they’ve never tried VR before. There are other consumer VR cameras available today, but you have to think carefully about where you place these cameras when recording, and they capture flat 360 footage that doesn’t create a realistic sense of depth,” Bavor says. 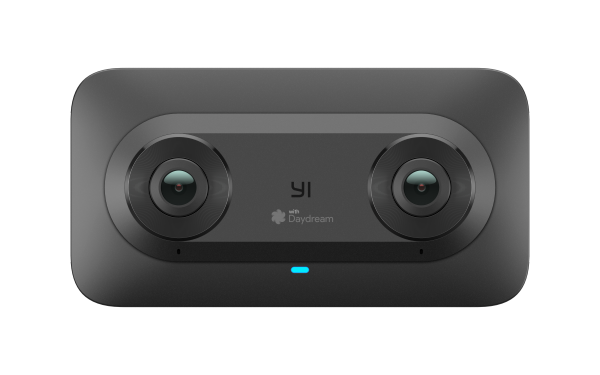 More manufacturers will be bringing V180 cameras to the market throughout 2018. Google says that YI will have a camera out this Spring (seen above). LG will also add one later in 2018, and Panasonic is preparing an add-on for its GH5 cameras. Professional creators will get the Z Cam K1 Pro as well.

More options to get involved with VR experiences could accelerate adoption of this still-nascent technology. Especially with a big player like Google investing in compelling content experiences for its Daydream platform, such as a game set in the Blade Runner universe, titled Blade Runner: Revelations. Marketers will want to keep an eye on how popular VR experiences become and judge for themselves when it’s time to jump into the new format.