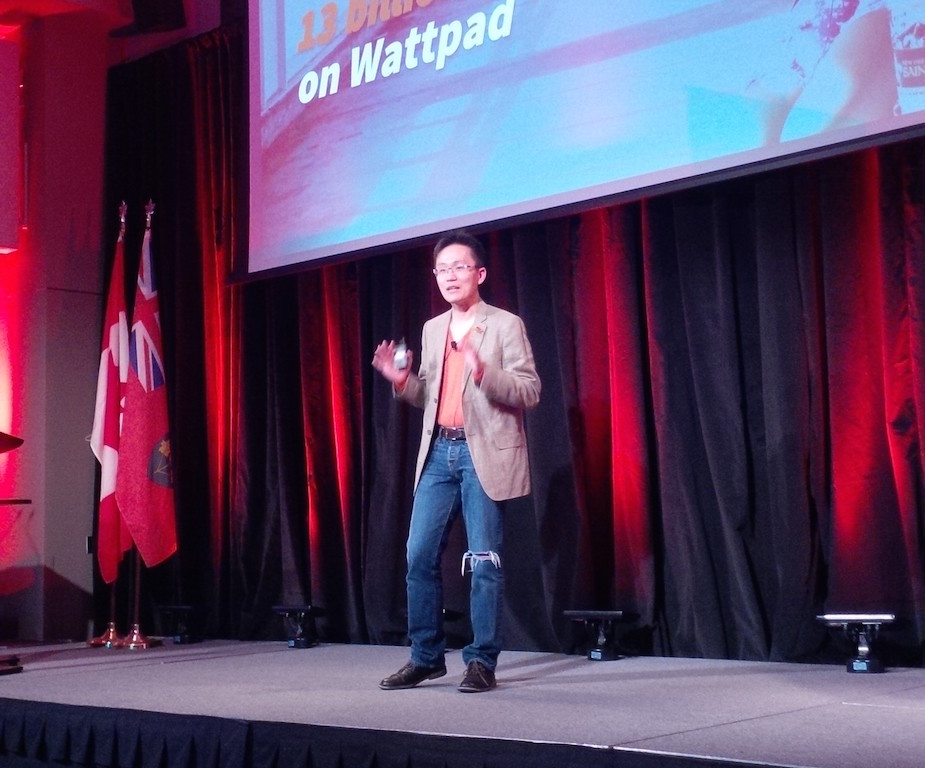 Canada should view and present itself as one startup ecosystem rather than separate hubs like Toronto and Waterloo, Wattpad CEO Allen Lau said Monday as Startup Canada’s national tour wrapped up in Toronto.

Following Lau’s keynote address at the event, an audience member asked him what can be done to accelerate Canada’s startup scene. Reflecting on the size and concentration of startup funding, talent and experience south of the border in Silicon Valley, Lau said it would make more sense to treat Canada as a single entity rather than as a collection of smaller, separate markets in various cities.

“Canada is a very large country so we’re seeing a lot of different ecosystems popping up. We have to do it more holistically. We can’t view Toronto and Waterloo differently,” said Lau, who founded Toronto-based Wattpad in 2006. The social network for authors and readers now has 40 million users worldwide.

“Stop treating us as silos”

“There’s only one Silicon Valley. So stop treating (Canada) as silos. Treat us as one holistic ecosystem,” Lau said.

In a July report released by Compass (formerly Startup Genome), Vancouver, Toronto and Waterloo all slid down in the global rankings of startup centres, with Silicon Valley again taking the top spot.

“Growth in Canadian startup ecosystems has slowed relative to the rest of the world,” the report concluded.

At Monday’s event, Lau also urged Canadian startups to look at government as more than just a source of financing.

“Government support is important but not necessarily from a funding perspective,” Lau said. “We don’t necessarily want their money but to make sure their policies are working (to support entrepreneurs).”

As an example, Lau pointed to the way Facebook Inc. and other large American tech firms directly lobby the U.S. federal government on issues that affect their operations and global competitiveness, ranging from taxation rules to privacy laws. By contrast, he said Canada’s digital entrepreneurs could do more to lobby Ottawa on something like copyright law, “which has to adapt for the Internet age” in order to help “Canada compete more effectively globally.”

Lau said the newly formed Canadian Council of Innovators is a step in the right direction. Lau is a member of the group, formed last month by BlackBerry co-founder Jim Balsillie to lobby Ottawa on business and technology related matters. Balsillie chairs the organization, whose other members include Shopify Inc. and Hootsuite Media Inc. Balsillie recently signaled the council’s approach by publicly dubbing the new Trans-Pacific Partnership trade pact “the worst thing that the Harper government has done for Canada.”

Although Lau didn’t mention the election that ousted Stephen Harper’s Conservatives, Monday’s event was attended by Bardish Chagger, the newly elected federal minister of small business and tourism. Chagger didn’t make any funding or policy announcements during her speech there. But Startup Canada co-founder and CEO Victoria Lennox said her chat with Chagger at the event gave her a sense that the new government will take “a really open and collaborative approach” to startup support.

“I haven’t seen an indication with this government (of) what their strategy or policy is going to be with entrepreneurship and small businesses beyond tax reduction, which they’ve committed to, and advanced funding for accelerators and incubators” as set out in the Liberal campaign platform, Lennox said.

“What I see is that their priority right now is just consultation and listening, figuring out what’s working and what’s not working. It doesn’t seem like they’re rushing into anything or have any preconceived notions of what needs to be done.”

Information gathered from Startup Canada’s cross-country tour will be formulated into a proposed national entrepreneurship strategy and presented to Chagger in early 2016. The Toronto event was the last in the tour, which also stopped in Halifax, Montreal, Vancouver, Whitehorse, Calgary and Ottawa.

Lennox announced Monday that Peel Region and Sarnia-Lambton have joined the official network of Startup Canada communities, bringing the total to 24. In addition, Startup Canada said it will help provide entrepreneurs with access to co-working facilities in seven Ontario cities. Launched in 2012, Startup Canada is a non-profit organization offering funding, mentorship, work space and other resources to Canadian entrepreneurs.

Christine Wonghttp://www.itbusiness.ca
Christine Wong has been an on-air reporter for a national daily show on Rogers TV and at High Tech TV, a weekly news magazine on CTV's Ottawa affiliate. She was also an associate producer at Report On Business Television (now called BNN) and CBC's The Hour With George Stroumboulopoulos. As an associate producer at Slice TV, she helped launch two national daily talk shows, The Mom Show and Three Takes. Recently, she was a Staff Writer at ITBusiness.ca and is now a freelance contributor.
Previous articleMicrosoft president announces new philanthropic arm
Next articleBlackberry Priv, Nexus 6P topped Canada’s Google tech searches in 2015