A Utah-based company has developed a way to make iPhones and other gadgets waterproof.

Attendees at this year’s Consumer Electronics Show have been pulling up short at HzO’s demonstrations, which include a fully functional iPhone repeatedly submerged in water yet still playing music, and an iPad that works after it has been dunked, with pockets of water still visible under the touch screen.

A waterproof coating from HzO protects an iPhone.

The technology isn’t intended for prolonged exposure under water, rather as a way to protect products when they’re accidentally dropped in the toilet or the bath, for instance. But the demonstration showed that the devices can, in fact, keep running for hours when submerged, and the company says they can safely be used while lounging in the pool or in the rain.

HzO has finalized its “WaterBlock” technology and is pursuing contracts with major manufacturers, according to spokesman Rick Peterson. 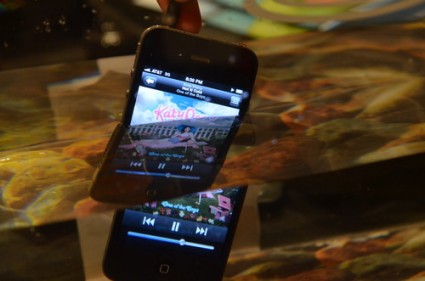 The company’s waterproofing process uses a vacuum chamber that sucks all of the air out, then pumps in a gas that seeps into the device.

The gas includes a waterproof material that settles on all the device’s surfaces, giving it a protective coating that is “nanometers thick,”according to Peterson.

Physical interfaces such as headphone jacks and charging ports are masked during the process to ensure they are not coated. When devices are submerged, the non-coated areas become weak points because they are exposed to water, but the company’s demonstrations at CES indicated they still function, at least for short stretches.

HzO does not comment on the material it uses, and Peterson would say only say it is a common material that has existed for “the last 50 years.” The coating can be applied in different strengths to provide varying levels of waterproofing, and can protect devices to depths of about a meter.

The waterproofing process, which currently takes several hours, is too costly to be performed on a device-by-device basis, so HzO is negotiating directly with device makers to include it as part of their manufacturing. That means for the foreseeable future, consumers won’t be able to send their own devices off for waterproofing.

Fujitsu attachment turns every mobile device into a 3D camera