There is an extremely high demand for employees who can work with Salesforce and this has led to much higher than average salaries for these positions, says Geoffrey Flynn, practice area lead for Slalom Consulting and a Salesforce MVP.

In a recent report of Canadian Salesforce user groups organized by Flynn and Aiden Martin, it surveyed 166 people from private Salesforce User Groups to find out what their salaries were and what factors lead to the best earnings.

Why? Because there’s high demand for the skill set, Flynn says. 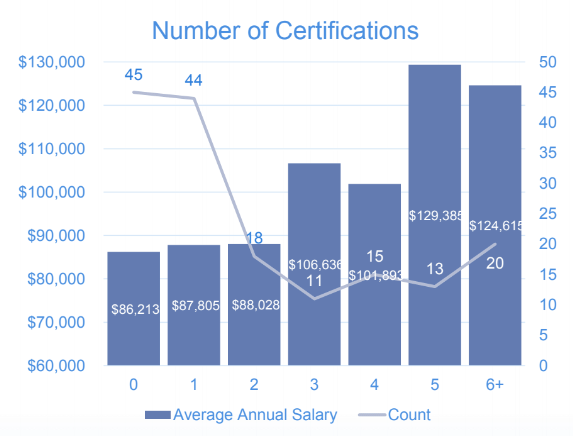 We can also see similar trends when examining the salary figures related to years of experience. For employees with between zero and six years of experience, the average salary ranged from $80,098-$93,802. After that point is where you really see a jump in salary, but it also plateaued significantly. From seven years of experience onward, the salaries spanned from $116,195 to $117,800. 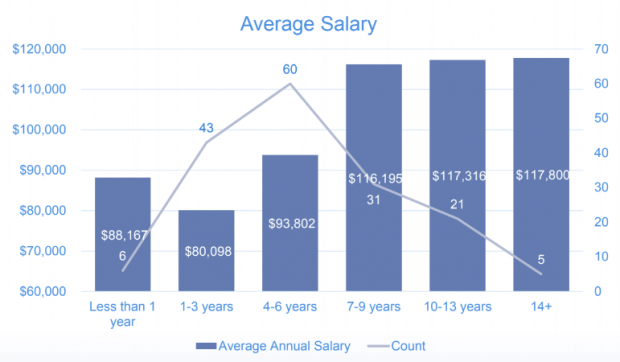 Most refreshing perhaps, is the relatively small gap between the salaries of men and women working on Salesforce.

The survey found that on average men are earning $99,369 and women are earning $93,998. While it is not complete pay equality, these numbers are much less drastic than the gender pay gap across other industries in Canada.

According to statistics provided by Statistics Canada, women on average earn 87 per cent of what their male counterparts earn. Based on the data in this study, women working with Salesforce earn 95 per cent of the amount men earned.

Also encouraging was the lack of a drastic gap between those working in the three major tech hubs (Toronto, Vancouver, and Montreal) and those that worked in rural areas. In fact, beyond those three cities, workers in rural areas actually reported higher earnings than those in urban areas. 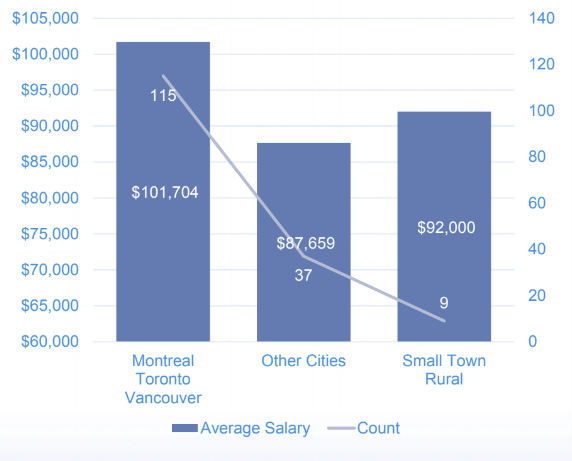 While traditionally one had to live in an urban hub to be able to earn a high salary, those in small-town rural areas reported an average salary of $92,000, which is not as much lower as one might expect than the $101,704 reported by those in Montreal, Toronto, and Vancouver.

Another interesting wrinkle among the findings was a higher reported average salary for those that worked remotely as opposed to those working in traditional office spaces; $117,647 and $92,458, respectively.

While Flynn could not present a reason for the higher salary for remote workers, he did say that Salesforce positions are the types of jobs that are conducive to remote work and he believes this is a trend that will continue to become more and more common.

“I definitely think there’s going to be a world – and we are kind of experiencing it now – where companies will have to catch up to people’s interest in working remotely,” Flynn said. “There’s no reason why we can’t work more remotely with all of the technology that is out there today.”

The freedom to work remotely, as well as the demand for the skills – combined with the effect this has on salary levels – has created an opportunity for those interested in technology to make use of a favorable employment landscape.

“If you have a passion for technology and a passion for critical thinking, the barriers to entry aren’t high,” said Flynn. “There’s massive demand out there. People are willing to invest to help you learn as long as you’re willing to put the time in yourself. The sky’s the limit in terms of what you can do within Salesforce right now.”

For those already working with Salesforce, Flynn highly recommends changing their job title on LinkedIn to reflect that, as Salesforce-oriented skills are providing more and more value to employers every day.

Salesforce leaders make their predictions for 2023