Imagine a sporting event that lasts more than nine months and travels more than 72,000 KM (39,000 plus nautical miles); all on water.

That’s the Volvo Ocean Race. This competition is held every three years as a yachting duel between roughly seven teams. This year’s edition – the 13th annual – currently has four teams but race organizers believe more will enter the race that starts this October.

To give you an example of how grueling this race is, the 12th edition of the Volvo Ocean Race covered 10 legs that stopped at ports of call beginning in Europe specifically Alicante, Spain. Some of these ports of call include India, Asia, Ireland, China, Brazil, Sweden and the U.S. This year it will finish in the Hague, the Netherlands. Sailors will travel to some of the most dangerous waters on Earth such as the Cape of Good Hope in Cape Town, South Africa and Cape Horn on the tip of South America. 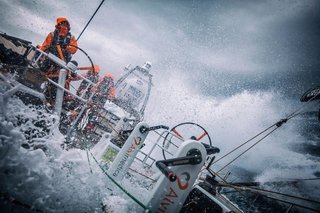 Its also a battle of survival as the rules state no fresh food can be on board. Crew members must combat the freezing elements in one leg of the race and then take in 40 plus degree Celsius heat in another. And, because of the very nature of the race these sailors are only allowed to bring one change of clothes on board.

Ashish Gupta, the CEO of HCL Technologies, called this race the “Mount Everest of racing.”

HCL has been named the Volvo Ocean Race’s strategic IT solutions provider for this year’s event. HCL will be responsible for developing an IT infrastructure that will form the technology backbone of Volvo Ocean Race. This will include inter-site connectivity at the race’s global stopovers, digital content delivery, mobile data centres and infrastructure with full redundancy, Wi-Fi networks, and multimedia facilities for media centres and race offices. HCL will also provide end-to-end IT support in setting up the race villages in all 12 ports, enabling Volvo Ocean Race to provide fan viewing experiences as they follow the boats during the eight-month marathon on water.

One key aspect of HCL’s infrastructure plan is to provide the live streaming and TV production for key events such as arrivals, departures and the In-Port Race series as more than two million viewers watch the race on TV.

Mark Turner, the CEO of Volvo Ocean Race, said the upcoming edition of the event will be more digitally focused than ever before. “Connecting the expected three million race village visitors, the 5,000 accredited journalists and the millions of fans around the world is an immense task. Building the complex IT infrastructure to support this is a huge challenge, and we’re confident that this partnership with HCL will allow us to provide fans, media and stakeholders with a more connected experience than ever before,” he said.

Gupta added, Volvo Ocean Race represents a life-changing experience for the crews and teams that take part. HCL teams from around the world will come together for this effort for the millions of race followers, who will be using the latest digital technologies to get closer than ever to the action.

This is not HCL’s first foray into sports. In 2016 they became the official digital partner of Manchester United of the English Premier League. HCL is working with Manchester United through its digital transformation journey.

The race will depart Alicante on 22 October of this year. At a projected 45,000 nautical miles, the 2017-18 race is the world’s longest professional sporting event. This edition of the race features three times as many Southern Ocean miles than its previous edition. An additional ring is added to the Volvo Trophy with each edition, and the 13-ringed incarnation of the trophy awaits its 2017-18 winner.