Videotron and SaskTel get top marks for Internet performance 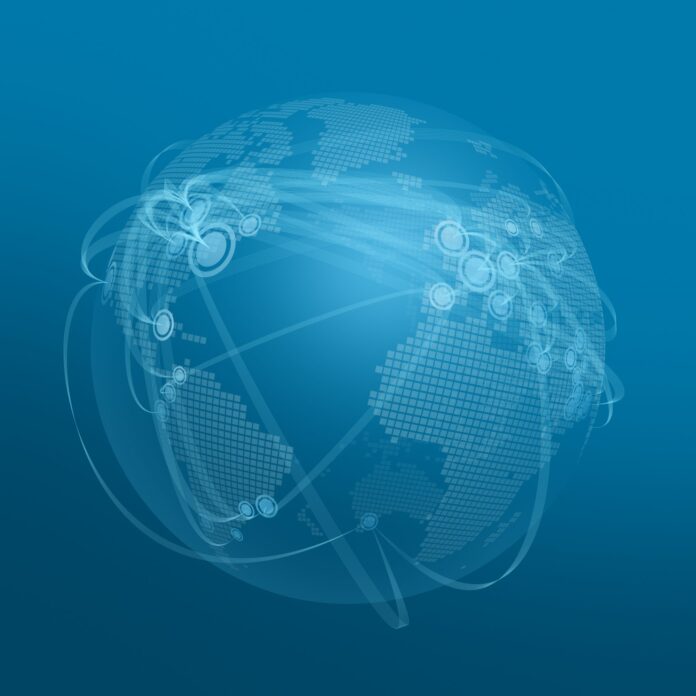 You probably don’t need research to tell you that Canadians with fibre optic-based Internet are generally happier with their service than people with DSL or cable-based connections. But now you have research anyway.

The 2015 Canadian Internet Service Provider Customer Satisfaction Study from J.D. Power gives top ranks to Videotron and Sasktel when it comes to satisfaction with Internet service, and also found that customers with fibre optic Internet service are more satisfied with their service than customers with DSL or cable modem connections. It also found Canadians are an increasingly bandwidth-hungry bunch.

We need better, faster and more reliable service to support all the things were asking of our home networks. The Internet service into our homes is powering home Wi-Fi networks that need to support PCs, tablets, smartphones and other smart devices. With the potential for multiple family members to be streaming HD videos in different rooms at the same time, the bandwidth demands are only growing and the consequences of unreliable service readily apparent, and frustrating.

“Today’s consumers require Internet connectivity as part of their lifestyle and we continue to see greater convergence of everything digital,” said Adrian Chung, account director at J.D. Power, in a statement. “Behaviours have changed the demand for Internet service with the use of on-demand streaming services, controlling household devices such thermostats remotely, or connecting smart appliances.”

The need to speed is driving a move to fibre optic-based connections – 18 per cent of Canadian Internet subscribers were on fibre in 2015, up 15 per cent over 2014. And these connections are getting faster – Bell Canada recently announced plans to bring Gigabit fibre service (it calls it Gigabit Fibe) to 1.1 million Toronto homes and businesses.

Customers were asked to measure their satisfaction with their Internet service provider based, in descending order of importance, on performance and reliability; cost of service; communication; billing; and customer service. Citing better performance and reliability, customers with fibre connections reported a higher overall satisfaction rate with their service (698/1000 on J.D. Power’s scale) with fewer connection errors, slow connections and service outages, compared to customers with cable modems (689) and DSL (670).

When it came to switching, price was the leading reason – 27 per cent of respondents were planning to change providers within the next year and most said getting a better price was the reason for the move.

When satisfaction is measured by region and provider, Videotron was on top in Eastern Canada for the third consecutive year (770/1000), followed by Cogeco with 715. and Eastlink with 690. In Western Canada, SaskTel was also on top for the third straight year (701/100), trailed by Telus at 690. 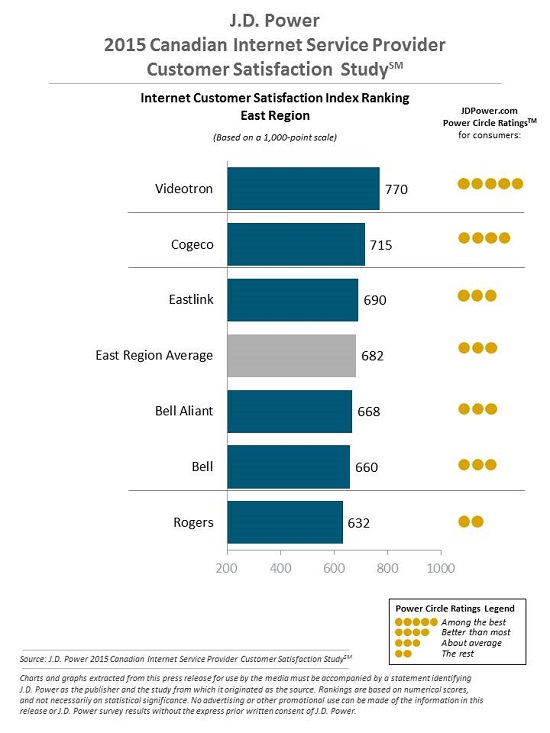 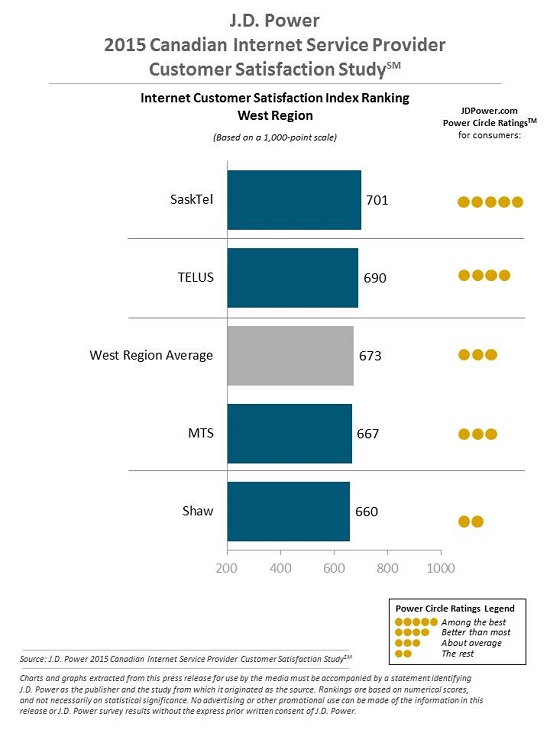 Jeff Jedras
Jeff Jedras is a technology journalist with IT World Canada and a member of the IT Business team. He began his career in technology journalism in the late 1990s, covering the Ottawa technology sector for Silicon Valley North and the Ottawa Business Journal. He later covered the technology scene in Vancouver before joining IT World Canada in Toronto in 2005, covering enterprise IT for ComputerWorld Canada and the channel for Computer Dealer News. His writing has also appeared in the Vancouver Sun & the Ottawa Citizen.
Previous articleRover brings iBeacon proximity technology to Maple Leafs Draft Party tonight
Next articleTech savvy Canadian athletes prepare for the 2015 Pan Am/ParaPan Am Games

Canadians are happy with their wireless carriers