While marketers increasingly appreciate the importance of video in their content mix and agree it produces the best conversions, a new report finds most marketers are still not effectively measuring the effectiveness of their video efforts.

According a new report by Demand Metric sponsored by video marketing platform Vidyard – 2015 Video Content Marketing: Evaluating Impact from 2014 to Present – video remains extremely prevalent as a content type. Of the B2B and B2C marketing professionals surveyed, 91 per cent said video marketing content had become more important to them this year, while just eight per cent said there had been no change in importance.

“Often, the popularity of a content type can render it less effective, but this 2015 study shows that video has staying power and its importance continues to grow: it has not lost its ability to differentiate, “ said the report. “Virtually the entire marketing community acknowledges that video is still growing in importance as a type of marketing and sales content.”

Reflecting that growing importance, marketers are producing lots of videos. More than half of respondents produced between five and 50 videos annually for marketing purposes with 31 per cent producing between 11 and 50. The numbers produced were relatively unchanged from 2014, suggesting marketers have found their video sweet spot. More than half of large companies (defined by revenue) produced between 11 and 50 videos annually, while 45 per cent of medium-sized companies produced between five and 10. Smaller companies, at 35 per cent, were most likely to produce less than five.

Most marketers use their video content on their web site or on social media, with landing pages and recorded webinars well back. Explainer videos and product features were the most often produced types of videos, but customer testimonials were also popular. 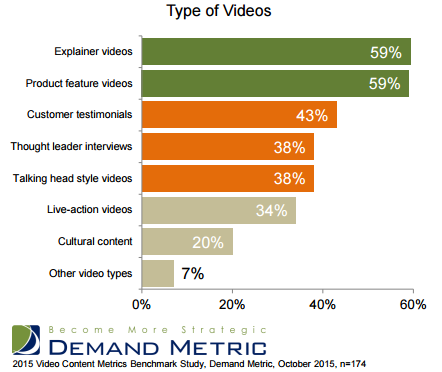 Compared to other content types, 51 per cent of respondents said video offered better conversion rates, while 23 per said it was much better and 20 per cent about the same.

And the return on investment from video content is growing, according to 50 per cent of respondents. However, the report noted with concern that 26 per cent were unable to say whether their video ROI was improving or not, a figure unchanged from last year.

“It’s quite possible to determine the ROI for video content,” said the report. “If organizations don’t know what the ROI is, it is because they choose not to measure it, not because the data is unavailable. Knowing ROI – and other performance metrics of video – is a function of tracking the proper metrics.”

Jeff Jedras
Jeff Jedras is a technology journalist with IT World Canada and a member of the IT Business team. He began his career in technology journalism in the late 1990s, covering the Ottawa technology sector for Silicon Valley North and the Ottawa Business Journal. He later covered the technology scene in Vancouver before joining IT World Canada in Toronto in 2005, covering enterprise IT for ComputerWorld Canada and the channel for Computer Dealer News. His writing has also appeared in the Vancouver Sun & the Ottawa Citizen.
Previous articleUGO Wallet hits milestone but Canadians slow to embrace mobile payments
Next articleWearable tech still a tough sell in the enterprise: IDC Canada study

Adobe partners with LinkedIn and Vidyard to bring new features to Marketo...

What your CMO can learn from the world’s most popular YouTube star...

8 business video facts you need to know, according to Vidyard