If your business is spending a lot of time using accounting software built as a one-size-fits-all solution, it may be time to discriminate a little more. Tercera Construction, a small business based in Vancouver with six staff, switched over to Sage Timberline Office, an accounting program designed specifically for construction companies by Sage North America.

“The construction industry is very specific in the amount of paperwork and type of paperwork,” says Dennis Donovan, president of Tercera. He would spend a massive amount of time on inputting data to create estimates, which is now much simpler.

Before switching to Sage Timberline, Tercera was using Simply Accounting, another Sage product also aimed at small businesses, but on a more general level. There are several software programs out there for the SMB market, such Intuit’s QuickBooks line, but using a program designed specifically for his line of work was a major benefit to the business, Donovan says. “It’s a really powerful tool for us.”.

Construction projects typically involve a number of different subcontractors and companies providing materials. “Cash flow is huge in our business,” Donovan says, and billing people correctly is hugely important. “I get one big cheque and I have to distribute it out to sub-trades and people who work for me,” he says, so accounting is actually a major role for him.

“The construction industry does have unique requirements,” says Dennis Stejskal, vice president of product management for construction real estate solutions at Sage. “By writing software specifically to the need of the vertical, you’re just going to better serve the market.” 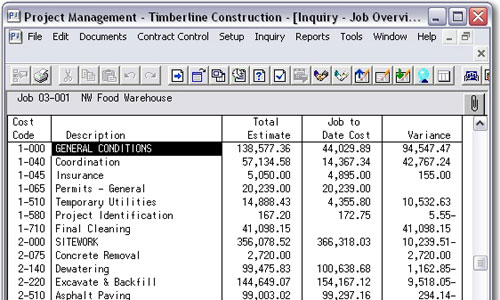 With general software, it’s more difficult to break down costs and discover where your money is going. Both Donovan and Stejskal agree – whether you’re building a home or a 10-storey building, it helps to break down the project. “[SMBs] do need technology that will streamline their businesses,” Spejskal says.

“We really like the dashboards that they have,” Donovan says, which breaks down cost of materials, cost of labour and other important information.“There could be hundreds of people involved in the project; you’ve got to communicate. Especially when talking millions, you really want to count your pennies,” Donovan says.

Sage’s Timberline product also links to AutoCAD Revit, design software that Donovan says is widely used in his line of work. When using it to design a 3D wall, for example, all the individual elements-drywall, paint, insulation-must be broken down for costing purposes, he says.

“It’s a mosaic not a melting pot,” Donovan says, because he is able to see a breakdown of his costs and understand where his money is. The system also allows for changes, so altering the estimate isn’t as time consuming as it once was, he says. “Now I do it once at the very beginning,” he says.

“Most of the clients haven’t gone through a transition like this in many years,” says Patrick Baker, president of Constructive Solutions for Business Inc., a Sage reseller in Vancouver. His company would go in and try to understand the construction business’ internal structure and apply that to the software. “My company is responsible for getting you up and live on the software,” Baker says.

Constructive Solutions-or a local Sage reseller-will then run a pilot with the company and also will run through several sample transactions to ensure everything flows through properly. His staff would also train the construction company’s employees.

For a company about Tercera’s size, the cost for implementing Sage’s solution would be about $25,000, according to Baker. But, with the product, you’re essentially replacing a person you would have to pay a salary, he says.

“An investment of this nature is sort of a one time investment,” he says. “You get more efficiency out of your staff,” he adds. “Now they’re getting that one coordinator,” he says, which can manage two or three different jobs.

Naturally, time savings for your business are dependent upon the size of the business and of its various projects, but Baker estimates that businesses could save 40 to 50 per cent of the time they would be spending on data entry and administrative tasks. The training typically isn’t too challenging for the staff, since they already input data into a spreadsheet anyway, Baker says. Sage’s program just streamlines that process.

The whole process of switching over usually takes about three months, Baker says. After that, it typically takes a company three to six months to get comfortable with the software and understand the value of their investment, he says.  “Change is tough,” he says, but the investment is worth it.