Douglas Lusted has nowhere to go but up after pocketing $25,000 for his winning pitch on escalator advertising technology at a recent University of Waterloo competition.

Lusted, just 19, has developed technology to place on-screen ads alongescalator handrails. The system features flexible screens with softwarethat can change the ads based on where the escalators are and the timeof day people use them.

“We plan on implementing them in airports and subway stations based onthe times that consumers buy (products) from certain companies,” saysLusted. 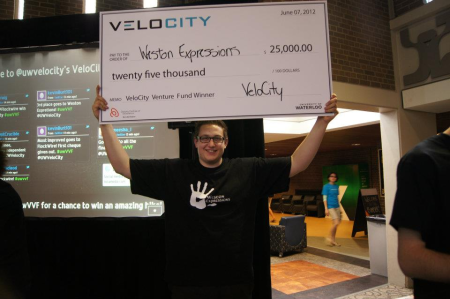 “From 6 to 9 a.m. we can advertise local coffee shops. When we knowstudents are coming home from school after 3 p.m., we can advertise alocal Reebok outlet. It changes advertisements on the fly, which noother system does,” he says.

Lusted was one of four winners at the latest VeloCityVenture FundFinal contest. The event is held three times per year at VeloCity, amobile and media tech incubator for student startups at the Universityof Waterloo. To enter, startups must have one co-founder who’s acurrent University of Waterloo student or who has graduated from therewithin the past year.

The latest contest whittled down 66 entries to 10 final pitches. Eachof the four winners gets a $25,000 grant.

“It’s a grant so they’re not expected to pay it back,” said VeloCitydirector Mike Kirkup. “It’s $25,000 because that’s how much money Tedgot from his grandpa to start his company.”

“Ted” is VeloCity incubator grad Ted Livingston, who launched theVeloCity contest by donating $1 million to the University of Waterlooin May 2011. The smartphone messaging app made by Livingston’s company,Kik Interactive Inc., hit onemillion users just 15 days after itsrelease in 2010.

Kik isn’t the only success story to come out of VeloCity. Startup firmPair (originally called Maide) recently graduated fromSilicon Valley’sY Combinator incubator and closed a venture capital deal worth justover $4 million. With a pedigree of past winners like that, Lusted hasa lot to live up to. But VeloCity contest judges and organizers wereimpressed with the poise and legwork he displayed.

“He’s incredibly well spoken and mature beyond his years for a19-year-old entrepreneur. He’s done a lot of work and market researchto show (potential) success for (his idea),” Kirkup said.

Though his idea involves technology, Lusted is actually studying in thebusiness and environment program at Waterloo and hopes to start his owncompany in renewable energy or green packaging someday. Since he’s notan engineer, he outsourced the technical development of the escalatoradvertising system and software technology, but still retains 100 percent ownership of the intellectual property and the firmhe created,Weston Expressions.

“I always knew I wanted to become an entrepreneur,” says Lusted, who’sfrom Ajax, Ont. and also launched his own Web site design firm calledWestonWebsites a few months ago.

It was that type of entrepreneurial spirit that led Lusted to theescalator advertising idea before he even started university.

“In high school I was a music producer, more on the hip hop side (ofthings),” he explains. “We’d hire skaters (ie, skateboarders) to stickup posters of upcoming artist events. As a joke, one put a poster on anescalator handrail and our Twitter hits started going through theroof.”

Where will the $25,000 grant go? Probably towards building a prototypeof the escalator ad system by the end of this year, Lusted says. He’salready lined up a manufacturer for it, but still hasn’t picked out astartup worthy name (how about Escalate-ify?) for his winningadvertising system.

“We’re not going to launch the product until early to mid-2013,” Lustedsays, “so we’re still working on all the cool names.”

Christine Wonghttp://www.itbusiness.ca
Christine Wong has been an on-air reporter for a national daily show on Rogers TV and at High Tech TV, a weekly news magazine on CTV's Ottawa affiliate. She was also an associate producer at Report On Business Television (now called BNN) and CBC's The Hour With George Stroumboulopoulos. As an associate producer at Slice TV, she helped launch two national daily talk shows, The Mom Show and Three Takes. Recently, she was a Staff Writer at ITBusiness.ca and is now a freelance contributor.
Previous article
Facebook gets boost from new iOS 6 and WordPress integration
Next article
Acer’s new Iconia A700 targets the HD tablet market