The University of Waterloo once again had the best Canadian showing at the Association of Computing Machinery’s (ACM) International Collegiate Programming Contest (ICPC) finishing in ninth place overall at the University of Warsaw today.

The “Battle of the Brains” contest is sponsored by IBM Corp. and pits the best student computer programmers in the world against each other in a five-hour marathon coding competition. This year, 112 teams of three students each competed to solve a slate of 12 coding problems using C++ and Java languages. The University of Waterloo will take home a bronze medal for its top-10 showing.

There was a dramatic ending as the University of Warsaw had a shot to win the contest after submitting a solution with just 30 seconds left on the clock. But in the end, the home team had to settle for second place as the solution was wrong. St. Petersburg University of IT, Mechanics & Optics from Russia won the 2012 World Championship by solving nine problems. 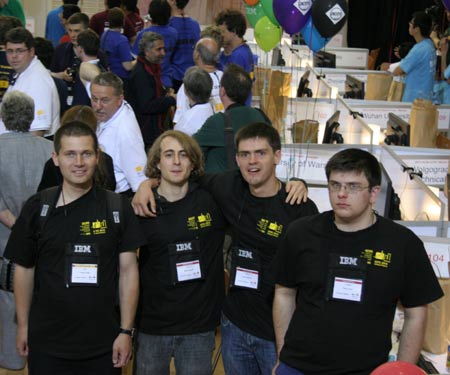 The University of Waterloo finished 9th at the ICPC World Finals.

“When people come to play together competitively, when they challenge each other, they have an amazing ability to achieve,” says Bill Poucer, the executive director of ACM ICPC.

The ICPC World Finals are the culmination of a months-long process involving regional competitions in 85 countries around the globe, attracting more than 25,000 student contestants. The contest serves as a recruiting tool for IBM Corp., who makes a point of extending job offers to at least the medal winners.

The best North American school to finish was Harvard University, in seventh spot. Waterloo won a bronze medal at the 2011 World Finals, finishing in 12th place there.

#Kids2030 initiative to teach children how to use AI and the ethics...