Undressing the social media success of a guy in his underwear

Would you go online to watch an average Canadian guy order pizza, meet a blind date and belly dance — all while wearing nothing but his underwear — at his house for 25 days in a row?

Over 50,000 people did, and in the process, gave Stanfield’s — a150-year-oldunderwear brand based in Nova Scotia — a boost with younger consumers.The key to the quirky marketing campaign was social media, an audienceheardThursday at DX3 Canada, a digital businesstrade show held in Toronto.

Angus Tucker and Mavis Huntley of Toronto ad agency John St. strippedtheir Guy at Home in His Underwearcampaign down to its bare essentialsduring their presentation. Social media marketing is still sorelatively new that they weren’t even sure the campaign would attractany interest when they launched it in 2010, said Tucker, co-creativedirector at John St.

An introduction to The Guy At Home In His Underwear.

“We were (bleeping) our pants over this whole thing,” Tucker told thecrowd.

The campaign did attract interest: more than 43 million mediaimpressions, over 50,000 “likes” on Facebook, a flurry of free mediacoverage by major mainstream outlets like CBC and CTV, and top prize atthe very first AToMiC Awards honouring Canadian advertising,technology, media and content.

Why did the campaign stick so well?

Tucker and Huntley cited these reasons, saying all are key ingredientsfor any social marketing push:

It was continuous: Like social media itself, thiscampaign wasaccessible around the clock, with cameras tracking an actor named Mark’s every movefor live streamed video 24 hours a day. The takeaway is that “(socialmedia) community management is a 24/7 job. You need commitment. Don’tunderestimate the amount of time it takes to manage a real timecommunity. It’s not a job for your intern,” said Huntley, director ofdigital innovation at John St. 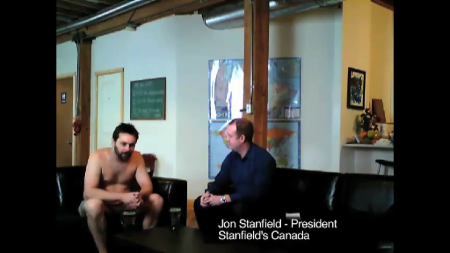 The idea fit the brand:The idea that Stanfield’s supports men (literally, with itsundergarments) led Tucker and Huntley to link the Guy At Home campaignwith support for a good cause. So Stanfield’s agreed to donate $1 to testicular cancer research for every “like”garnered by the campaign’s Facebookpage.

Giving followers an easy way to support a good cause is interactive,makes donors feel positive about themselves and the brand, and leavesthem with the impression that Stanfield’s “is supporting men, not justphysically but emotionally,” Tucker said.

It was real and relatable: Mark, the actor who starred as himself in the project, is a testicular cancer survivor, so the audience knew he had a real life connection to the charitable cause. And compared to slick, traditional TV ads, this campaign (like many in social media) was something real people can relate to: a guy with a pot belly ordering pizza in his underwear.

“Generic advertising is expensivephotography and expensive retouchingand expensive lighting,” Tucker said. “Social media is less scripted,less polished and more real. It feels like the way you interact withyour friends in your real life.”

Cheaper than TV ads
There’s a financial upside to the grittier approach too. The Guy atHome social campaign cost just $300,000. The average TV ad costs$100,000 to produce and “millions” to distribute, Tucker said.

It was interactive andeasy: Followers could interact with Mark on Facebook Chator vote in a daily poll to determine what weird activity he should donext. (One of the biggest vote getters was “order pizza in German,”with a “highly entertaining” result when the pizzeria forgot to warnits puzzled dispatcher beforehand, Huntley said.)

The product wasn’t thefocus: The only time underwear was ever mentioned was eachmorning when Mark donned a new model of briefs or boxers from theStanfield’s line. The rest of the campaign focused on the entertainmentand suspense value of his experiences at home instead of the productitself.

It was easy to engage:All viewers had to do was click on a button for almost everything: to“like” the campaign’s Facebook page, to donate to cancer research, tovote on what Mark should do next.

“Think of ‘What could I ask the laziest person in the world to do andreasonably expect him to do it?’” Tucker said.

It was what it was:Tucker and Huntley quickly realized that unlike an old schooladvertising push, a social campaign with a 24/7 real time videocomponent is impossible to control 100 per cent. So they tried to planfor every possible thing that could pop up or go wrong. And then theyjust went along for the ride.

Case in point: Huntley envisioned CBC TV host George Stroumboulopoulospopping by Mark’s place for a 15-minute chat during the campaign. ButStrombo stayed there for two hours, throwing off kilter a blind datethey had planned for Mark that night.

Mark’s blind date ended up being more interested in Strombo than inhim. It was awkward and unforeseen but generated a lot of buzz for thecampaign, Huntley said.

Christine Wonghttp://www.itbusiness.ca
Christine Wong has been an on-air reporter for a national daily show on Rogers TV and at High Tech TV, a weekly news magazine on CTV's Ottawa affiliate. She was also an associate producer at Report On Business Television (now called BNN) and CBC's The Hour With George Stroumboulopoulos. As an associate producer at Slice TV, she helped launch two national daily talk shows, The Mom Show and Three Takes. Recently, she was a Staff Writer at ITBusiness.ca and is now a freelance contributor.
Previous articleDatawind’s $35 tablet delayed over quality dispute
Next articleRehabit.me lets your friends bet you won’t lose that 10 pounds