Despite previous reports indicating the next BlackBerry-branded smartphone wouldn’t be available in Canada anytime soon, manufacturer TCL Communication has announced that Canadians will be able to get their hands on the BlackBerry Motion soon after all.

Using Halloween as an opportunity to offer BlackBerry users a treat rather than a trick, TCL revealed on Tuesday that the Android-powered, touchscreen-based Motion will be released on Nov. 10, and available for purchase from providers Bell Canada and Telus Corp., Telus subidiary Koodo, and Saskatewan’s SaskTel.

Pricing for the Motion seems to differ slightly by carrier. Telus and Koodo plan to sell it for $100 with a two-year plan, or $605 outright. Bell and SaskTel will package it with a $99 with a plan, or $599 outright.

In an Oct. 31 statement, TCL North America president and general manager Steve Cistulli called the Motion’s Canadian release an opportunity neither TCL nor BlackBerry Ltd. appeared eager to pass up.

“Working with our partners in Canada to launch our newest BlackBerry smartphone gives us the opportunity to bring our expanded portfolio to this important market, delivering new experiences while remaining steadfast with legendary privacy, reliability and productivity that have made BlackBerry so iconic over the years,” Cistulli said in the statement. “The BlackBerry Motion is an exciting addition to our growing BlackBerry smartphone portfolio in North America, and it sets a strong foundation for additional portfolio growth in this region in the years to come.” 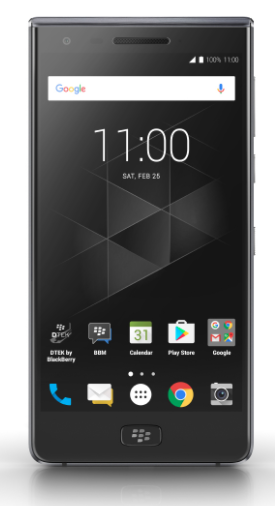 “We’re confident that customers, who are becoming increasingly aware of the importance of security and productivity on their smartphones, are going to enjoy the new BlackBerry Motion,” Thurber said in the release.

Functionally speaking, the Motion is identical to the KeyOne, sharing its predecessor’s Android 7.1 Nougat operating system, Snapdragon 625 processor, 4 GB of RAM, 32 GB of storage, and 12 megapixel rear camera, though it has the added benefit of being water and dust resistant, and naturally features a larger, 5.5-inch screen. TCL has also said we can expect an OS update, to Android 8.0 Oreo, in the new year.

The device also features the largest-ever battery to be incorporated into a BlackBerry smartphone, a 4000 mAh powerhouse that according to TCL offers more than 32 hours of mixed use, and a trademarked “quick charge 3.0” feature from Qualcomm capable of charging the device to 50 per cent in roughly 40 minutes using a USB Type-C charger.

Also new to the device is the BlackBerry Android system’s new Locker mode, which allows users to store documents and photos in a folder that requires a PIN code or fingerprint to access.

We got a first look with the BlackBerry Motion on Monday, so look out for our video with impressions on what this device has to offer very soon.

Eric Emin Wood
Former editor of ITBusiness.ca turned consultant with public relations firm Porter Novelli. When not writing for the tech industry enjoys photography, movies, travelling, the Oxford comma, and will talk your ear off about animation if you give him an opening.
Previous article
Telus to purchase U.S.-based Xavient Information Systems for $250M USD
Next article
Interac adds money request, auto-deposit features to e-Transfer platform