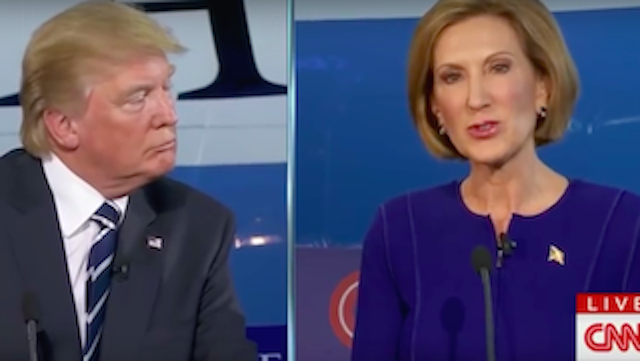 As president and CEO of Canadian payment processing firm Moneris, Angela Brown has worked her way to the top of not one, but two male-dominated fields: technology and financial services.

So when Brown watches Carly Fiorina’s run for the White House, she sees evidence of the skills Fiorina honed during her time running tech firms like Hewlett-Packard, Lucent and AT&T.

“I watched the debate and (Fiorina) performed so well. I was proud of her,” Brown said Wednesday at an event celebrating women in technology. “I think she’s impressive. No one should be surprised that she knows how to handle tough questions or talk on her feet because she has had to do that for analyst meetings and big employee meetings and customers.”

Brown spoke at an event in her hometown of Mississauga, Ont. organized by the Information Technology Association of Canada and Canadian Women in Communications and Technology.

In the last GOP candidates’ debate, Fiorina took frontrunner Donald Trump to task for disparaging her looks in an earlier media interview. After her performance in the debate, pictured at top, Fiorina rocketed to second place in opinion polls behind Trump.

“One of my hobbies is following the craziness in U.S. politics,” Brown told her audience Wednesday. Having spent part of her career in the U.S., she means it affectionately. Careful not to give Fiorina an outright endorsement, Brown said even those who don’t agree with Fiorina’s political stance on specific issues can still view her as proof that female candidates are capable of running for the highest levels of public office.

“It doesn’t mean I’d vote for her or vote Republican … But she’s so stellar that (it shows) there must be 17 other women that could also potentially be as good as the other 17 guys that are out there,” Brown said, referring to the rest of the GOP presidential candidates.

Similarly, even though Fiorina had a somewhat contentious reign as HP’s CEO, she still showed other women it’s possible to break the glass ceiling, simply by being the first female CEO of a Fortune 20 corporation.

To illustrate how far many industries have come in becoming more inclusive, Brown recalled the beginnings of her own career history in banking.

“The challenge was that all the front line workers, who were tellers, were female and all the executives were male,” said Brown, who held executive positions at CIBC and MasterCard prior to Moneris.

Today at Moneris, where Brown took over the top job in 2013, six of the 10 senior executives are women.

“We’ve very aware of diversity and committed to that and we have some goals to improve our diversity across the board” including disabled and Aboriginal Canadians, she said.

While Brown encouraged the audience to strive for a diverse balance at their companies, she also concluded that “you have to go with the best candidate” regardless of gender.

One way to ensure women have more leadership opportunities, however, is “to create a pipeline of talent at multiple levels,” she suggested. “Ultimately we’ll know we’re there when the pipeline” – meaning the internal pool of emerging talent – “is diverse.”

Since digital technology is disrupting virtually every industry right now, females with tech skills and experience “are a hot commodity” among recruiters and HR managers in all sectors, not just IT, Brown said.

Brown noted that when she started her career in financial services, maternity leave was grudgingly accepted among upper managers and paternity leave was unheard of at any level. Now she sees attitudes toward both undergoing “a big evolution.”

She also sees her own daughter, now pursuing engineering studies, as part of the progression in opportunities for women in tech-related fields. Will Brown some day step into the political arena to promote that progression at the government policy level?

“I do love politics and I do follow it,” she smiles. “But I wouldn’t ever run for office.”

Christine Wonghttp://www.itbusiness.ca
Christine Wong has been an on-air reporter for a national daily show on Rogers TV and at High Tech TV, a weekly news magazine on CTV's Ottawa affiliate. She was also an associate producer at Report On Business Television (now called BNN) and CBC's The Hour With George Stroumboulopoulos. As an associate producer at Slice TV, she helped launch two national daily talk shows, The Mom Show and Three Takes. Recently, she was a Staff Writer at ITBusiness.ca and is now a freelance contributor.
Previous article
Internet of Things moving from planning stage to execution: IDC
Next article
Bell launches ZTE Grand X View tablet