TouchSmart 600 gets a grip with major software improvements

With Windows 7, Microsoft has built support for multitouch gestures directly into the operating system.

And though using your fingers to tap, flick, and pinch your way around probably won’t replace the humble mouse anytime soon, HP has almost three years of experience in producing multitouch-capable all-in-one PCs. It shows.

Aesthetically, the new TouchSmart 600 retains the familiar and elegant TouchSmart design, including ambient lighting that casts a soothing colored glow. Its 23-inch display puts it between HP’s existing 22-inch TouchSmart IQ500t and 25.5-inch TouchSmart IQ816 in terms of size.

Like the latter, the TouchSmart 600 supports a resolution of 1920 by 1080 (1080p) – perfect for watching high-definition movies and TV via its built-in Blu-ray slot drive and HDTV tuner.

You can also stream shows wirelessly over 802.11n, and suck in photos with the integrated multicard reader. A remote control is included, as well.

But as with the earlier models, on the TouchSmart 600 it’s HP’s custom software that really shines. Version 3.0 is a significant upgrade, offering touch-friendly versions of Hulu, Netflix, Twitter, and other applications that have oversize buttons and that understand gestures such as swiping and pinching. 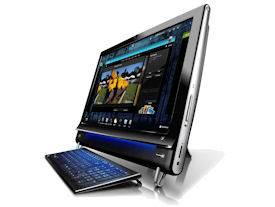 The Collage app lets you use two hands to shuffle, resize, and rotate photos, in a way that’s reminiscent of Microsoft’s high-end Surface table PC. And the HP apps now multitask, letting you hop back and forth by sliding them around with a fingertip.

The interface is responsive, and is the benchmark for upcoming Windows 7 all-in-one PCs from Acer, Asus, Dell, Gateway, and MSI.

As touch remains best for casual interaction with the PC in a family room or kitchen, HP also throws in a wireless mouse, plus a low-profile wireless keyboard that you can tuck beneath the case when you’re not using it.

Those components helped the TouchSmart 600 achieve a WorldBench 6 score of 92, which is right in the middle of our top-performing all-in-one PCs. It’s pretty much equal in performance with the Core 2 Duo T8100-equipped TouchSmart IQ816 (81) and the Lenovo IdeaCenter A600 (87).

When it comes to all-in-one speed, nothing we’ve tested so far has matched the 24-inch Apple iMac’s WorldBench score of 111.

As for gaming, however, the TouchSmart 600 simply can’t match those all-in-one PCs; it struggled to break a playable 30 frames per second at 1680 by 1050 resolution, in either Enemy Territory: Quake Wars or Unreal Tournament.

Even with Windows 7, touch remains an entertaining luxury rather than a killer feature; and if you can do without it, you can get a machine for a lot less cash with features and specs that are otherwise comparable.

But if you’re ready to reach out and touch Windows, the TouchSmart 600 lets you do it in a way that’s both fun and effective.