It’s not perfect, but tipping the scales at less than four pounds and packed with some features found in the larger Satellite machines this 11.6 inch-screen device that can run on battery power for nine hours, would be a good backup notebook or travel mate for mobile workers or for those who work out of a home office.

The T110 is just slightly larger than the typical netbook. It is best used for creating light office documents, surfing the net, and perhaps watching some videos.

Although the Satellite T110 can be considered a netbook, it’s slightly wider screen and less cramped keypad, makes it more comfortable to use. 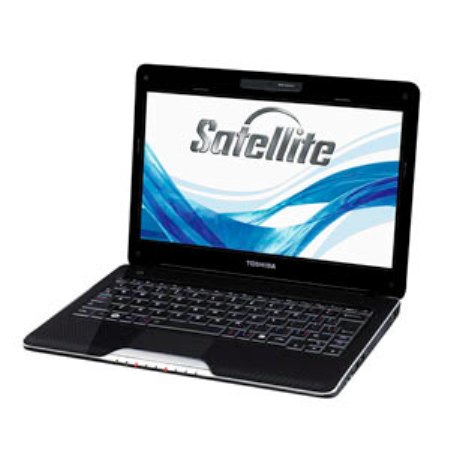 Its glossy black lid with gray swirl designs reminded me of a larger HP notebook. The design worked well with the HP unit but tended to make the T110 lighter and thinner cover look “plasticky”.

The notebook’s outer looks are deceiving. Despite that minor drawback, the T110 is packed with useful features that places it in the high-end of the netbook pool.

The machine ships with 802.11 wireless networking and Bluetooth capability and comes with either the 32-bit or 64-bit version of Windows 7.

There are three USB 2.0 ports along the sides, a VGA port, 10/100 Ethernet, microphone and headphone ports, as well as a HDMI and SD card port.

One very handy feature is the sleep-and-charge capability on one of the USB ports. This feature enables users to charge a USB device even if the notebook is switched off and not plugged to an outlet.

There are also numerous diagnostics and utilities settings. For instances, the T110 has a face recognition security setting that enables hands-free and password free logon.

The hard drive protection mechanism for the T110 employs a sensor that “parks” the hard drive heads when it detects excessive movement to avoid damage. This unfortunately slows down the system and causes video images to become choppy.

The T110’s Bulletin Board application allows users create boards, stick notes on them, and create a to-do-list.

The Satellite T110, is powered by an Intel Pentium SU2700 CPU that runs at 1.3 GHz which is 300MHz slower than a netbook using a hyper-threading capable Intel Atom chip.

It may get a bit warm as you use it but doesn’t get uncomfortable. I also found the unit’s fan was very silent.

The netbook’s screen is visible outdoors, even in bright sunlight, but the webcam does present some pretty muddled images when used in dimly lit rooms.

Like many netbooks, I found the touchpad of the T110 to be finicky. Often when I slid my finger over the pad, the screen image would suddenly zoom in or zoom out.

The keypad, though smaller than that of a normal laptop, is easy to use.

Priced at around $629, the Toshiba Satellite T110 is a good buy for users looking for a small laptop that is more powerful than the typical netbook.

A strong selling point of the machine is its long battery life, which makes it ideal for either the casual traveler or mobile worker.

Nestor Arellano
Previous article
Top Craigslist scams and how not to be bamboozled
Next article
Toyota to recall 400,000 Prius cars over software glitch