As much as $1 billion in information technology procurement contracts are up for grabs in Toronto’s massive waterfront revitalization project.

The Toronto Waterfront project, which encompasses three neighbourhoods (East Bayfront, West Don Lands and Lower Don Lands), south of the city along the late front, will cover no less than 174 hectares of land. Planners hope to build some 12,000 residential units and some 228,600 square meters of commercial space and create 8,500 jobs in the clean tech and digital media space. Since 2001, the project has contributed $1.6 billion to the Canadian economy and generated thousands of jobs.

“There will be a lot of procurement opportunities in this project,” promised Bill Hutchinson, chair of Waterfront Toronto’s iWaterfront Advisory Council and executive director of its Intelligent Communities initiative. 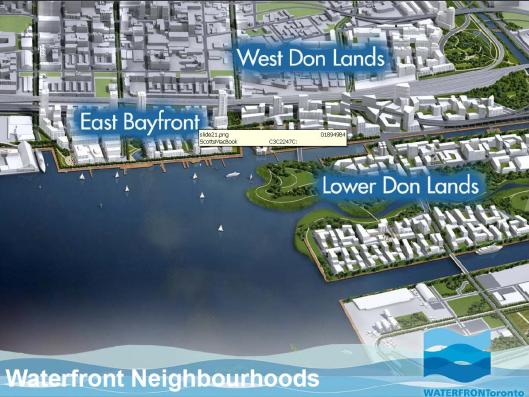 Planners have estimated that around $32 billion will be spent on the project. “But not all of that will be in construction. Over $1 billion worth of technology will be required,” Hutchinson pointed out in a recent teleforum on the project held by the Canadian Advanced Technology Alliance (CATA Alliance).

The CATA Alliance wants to stir interest in the project among local information and communication technology (ICT) companies.

Another primary focus of the project is to introduce sustainable practices and green technology in the area to reduce carbon footprints.

For instance, plans have been drawn for a single power plant to serve the communities. “Hot and cold (water) return will go up pipes to every building,” Hutchison said. “There will be no boilers in every building and we can change the power plant as technology changes.”

Time is ripe for connected community

The time is ripe to develop a fully connected community in Toronto, according to Rick Otway, vice-president of central operations for Cisco Systems Canada.

He warned that the continuing trend of massive migration of rural populations to urban centres will further strain resources and space in cities unless technology is brought in to help manage factors such as power consumption and traffic.

“There are 500 million people being urbanized and moving from rural areas to urban cities in the next five years,” he said. “And that leads, as a by-product, to big cities getting bigger and a not-so-good by-product that it’s these top 20 mega cities that use about 75 per cent of our world’s energy.”

“By having a widely available ICT infrastructure powering the city, some of the obvious areas to exploit are connected transportation, optimization, smart work and work centres,” Otway said. 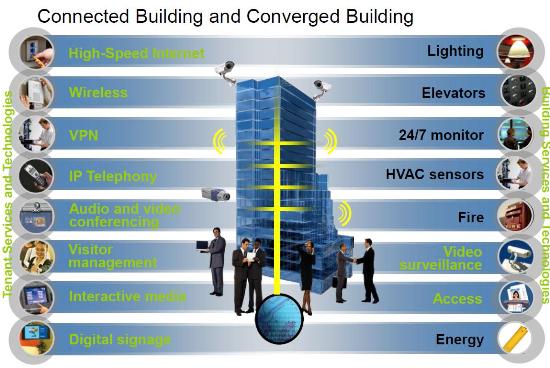 Ted Maulucci, CIO with Canadian home builder Tridel, sees IT built into the backbone of buildings. “Five years ago, we wanted to get something like this off the ground but we could not find a consultant that specialized in the area,” he said.

Today even the most modern high-rise condominiums are typically a patchwork of analog and digital IP-based networks, Maulucci said. “Why can’t all these networks be consolidated into a single network?”

While security has been a key selling point for introducing networked security into homes, Maulucci says ultra-broadband will extend services further.

“Ultra-broadband will allow residents to browse and book building amenities online. The energy management systems can determine what amenity is being book and throttle energy allocation accordingly,” he explained.

Some of the areas where local contractors can contribute include:

“We have the capability now to be able to control and create an urban services platform in our cities. This gives us the capability to transform what we do in those cities, how they’re designed, how traffic flows and where we live,” Otway of Cisco said.

Just as traffic on the Internet is being controlled through policies, bandwidth shaping and traffic shaping, so too can the cities we live in, he added.

“The basic premise here is once we’ve established the underlying high gigabit infrastructure we can essentially run a city on network information.”