It all stemmed from those darn gift cards cluttering up her wallet.

“It was literally out of personal need. I had a wallet full of gift cards and after I got married I said ‘This is ridiculous,’” says Ho. “I felt like I was wasting (someone else’s) money on something I didn’t want or need.”

The prospect of pacing the malls with retail cards she received as wedding gifts filled Ho with dread, especially since some were for stores or items she had no interest in. Since many of the gift cards couldn’t be redeemed for cash, she tried selling them on Craigslist.

Related story – Ten tips to get the most out of CraigsList

“It didn’t feel safe meeting somebody (that way) and it was too much work actually,” she says of the hours she spent listing her cards on Craigslist, trying to meet up with buyers in person, and dealing with no-shows. 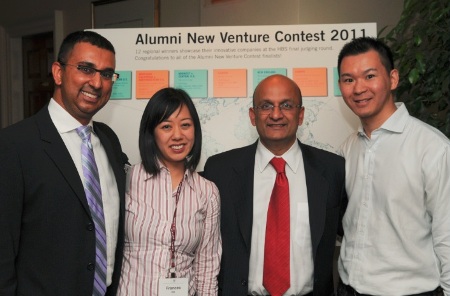 After seeing some U.S.-based Web sites where consumers could trade gift cards, Ho hit on the idea of setting up a gift card resale site for Canadians. She teamed up with Toronto-based Harvard Business School grad Zaheed Poptia and in 2009 CardSwap.ca was born.

Last week, all three flew to Boston for the Harvard Business School Alumni New Venture Contest. The Toronto team snagged a top three finish out of 12 groups from around the world, including Brazil, Germany, India, South Africa and the U.S., home of the eventual winning team. (CardSwap’s placing is called top three because once it got down to the final three teams, judges announced the grand prize winner but didn’t award a second and third place, Ho explains.)

“It was quite surprising we did so well,” Ho says. “When we were selected to move on to the finals, we were very surprised, and honoured to be with the other two top three companies too.”

CardSwap buys unused gift cards from consumers, then resells them at discounted rates to other buyers who want them. CardSwap makes money for its site by pocketing the difference between what it paid for the cards and the price at which it resells them.

5 Web site building services every small business should use

To prevent fraud, CardSwap validates all gift cards and their value with the original merchants before listing them for resale on its site. Buyers of resold cards have three weeks to notify CardSwap if they have any problems. CardSwap guarantees full refunds for cards that don’t work or carry an inaccurate dollar value on them.

Sellers of unused cards must mail them to CardSwap, which in turn mails them to their new buyers, a process that racked up a backlog of swapped gift cards during the Canada Post strike, Ho says. Although the mail-in part of the transaction is partly honour-based, Ho says they “haven’t had any problems with that; 99.5 per cent of mail does go through.”

While the site doesn’t feature any ads or sponsorships right now, Ho doesn’t rule out adding them to the mix later on.

“Maybe in the future. But right now we don’t want to clutter it. We want to keep the site clean and focused,” she says.

Other Web sites offering similar services include Giftah, Plastic Jungle and Gift Card Rescue, although the latter only operates in the U.S. All are trying to grab a slice of the huge market for unused gift cards: an estimated $6.8 billion worth of gift cards go unused each year in the U.S. and up to $1 billion worth are never redeemed annually in Canada.

Unused gift cards added $37 million to the balance sheet of U.S. retailer Home Depot Inc. in 2009 and propped up the books of American electronics chain Best Buy by about $40 million in 2007. No wonder: a Consumer Reports study found that 27 per cent — over one quarter — of gift card recipients still hadn’t used their cards a year after receiving them during the 2006 holiday season.

There’s one contest Ho doesn’t know the outcome of yet. In May, CardSwap’s team was taped pitching their site to the notoriously tough panel of angel investors on CBC television’s Dragon’s Den. They were one of 250 teams filmed for the reality show out of 5,000 applicants, but only 125 teams actually get to appear on-air for the program. If CardSwap is deemed broadcast-worthy, it won’t find out until two weeks before the air date.

“I guess you could say it was like literally facing the dragons,” Ho says diplomatically, also careful not to violate the CBC clause she signed to keep the outcome of her pitch for dollars a secret. “A very interesting experience.”

Christine Wonghttp://www.itbusiness.ca
Christine Wong has been an on-air reporter for a national daily show on Rogers TV and at High Tech TV, a weekly news magazine on CTV's Ottawa affiliate. She was also an associate producer at Report On Business Television (now called BNN) and CBC's The Hour With George Stroumboulopoulos. As an associate producer at Slice TV, she helped launch two national daily talk shows, The Mom Show and Three Takes. Recently, she was a Staff Writer at ITBusiness.ca and is now a freelance contributor.
Previous articleFacebook’s supremacy in danger as user satisfaction plunges
Next articleNewest beta of Intune built with SMBs in mind