But can these tools offer some of same benefits to retail outlets? Can they, for instance, help shore up the sales of smaller stores within a large mall?

Claire Santamaria’s answer to those questions is an emphatic “yes.”

Last year, she and her team launched a unique social media-driven campaign at the shopping centre.

Dubbed Yorkdale Is Me, the overarching goal of the campaign was to augment customer spend within the Centre’s more than 240 stores.  And increasing visitor traffic to these stores was the quickest, most obvious way to go about it.

“More patrons spending more time in the shopping centre means more purchases,” Santamaria said. “There’s a direct link between the time someone spends in our stores, and how much money they spend.”

Already the centre draws in approximately 400,000 customers a week.

Ten ways to turbocharge your brand and business with Facebook

Enticing these customers to visit more stores and spend a lot of time in them was a key goal of the campaign. The goal was realized for by the end of campaign 49 per cent more sales per visit (compared to the average shopper) were generated.

Smart use of social media — combined with a few strategic offline promos — drove the campaign’s spectacular success, according to Santamaria and her team.

Who’s the savviest of them all?

The big draw was a contest introduced in the Fall of 2009.

“We set out to find 10 new faces for the advertising campaign we’re launching this Spring,” said Santamaria.  “We realized introducing Yorkdale Shopping Centre within the social media space would tremendously enhance the value of our digital assets.” 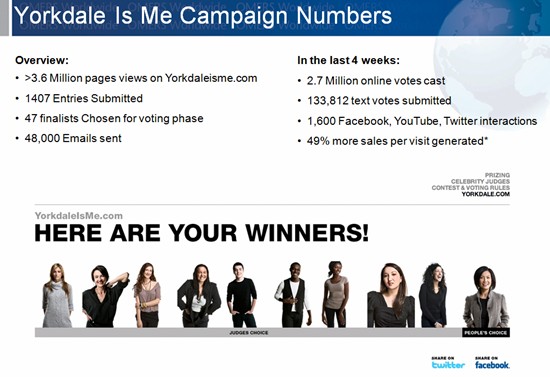 One such asset is Oxford Properties’ digital database of regular shopping centre patrons and other stakeholders. This database was always considered vital to Oxford Property’s marketing programs with potential partners.

“If a company wants to rent floor space in our shopping centre over a weekend (say) they would pay a fee for that. But in addition, if they want to use our database to make people aware they’re there, we would charge them extra.”Santamaria and her team also saw the “new faces” campaign as a great way to expand and publicize this database, which is a monetizable commodity.

The first step was a call for entries, mainly done online, though some offline initiatives helped publicize the contest. More than 1,400 people entered the contest. Contestants had to submit a picture, state why they should be the new face of Yorkdale mall, and what it meant to be upscale.

Next the entries were reviewed and 50 finalists selected.

“Each of them came to the shopping centre, over a two-day period, to have their pictures taken. They also had to produce a short video on why they should be chosen as the people’s choice winner,” Santamaria said.

She said individual posters were created of each of the 50 finalists. The poster included information on how someone could text in their vote for the person using a mobile phone. Online voting was another option offered.

“Finalists used all their ingenuity to get friends, family, and even strangers vote for them,” said Santamaria.

Apart from the people’s choice winner, the nine other winners were selected by a judges’ panel that included Lisa Tant, editor-in-chief of Flair magazine, Amy Verner who covers all things fashion for The Globe and Mail and Melissa Grelo a journalist with CP24’s news team.

“Judges used several criteria to select the nine faces,” said Santamaria. “These included the breadth and depth of the candidate’s social interaction and how they promoted themselves online, as well as offline.”

Voting was held over a four-week period.

The nine winners picked by the judges panel, and the “people’s choice” winner were styled and professionally choreographed by noted fashion photographer, Chris Nicholls.

These pictures will also be used for mall’s ad campaign this Spring.

“Their prize package included $1,000 in Yorkdale gift certificates, a two-hour wardrobe consultation with one of our stylists,” said Santamaria.  “And the people’s choice winner got their own parking spot at the shopping centre.” 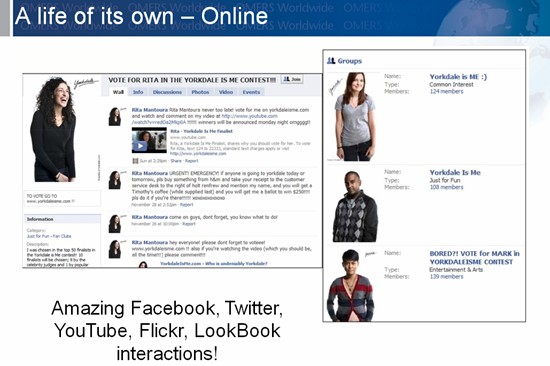 Much of the content used on these channels – pictures, video snippets and more – were aggregated on the day the finalists came into the shopping centre for their photoshoot, said Yvette Bernard, interactive media specialist at Oxford Properties.

“I created a chart listing the content and media assets I needed for each of the channels — Facebook, YouTube, Twitter. And I went into the shoot with my chart, checking out items as I got them.”

Bernard said this strategy helped the team make optimal use of the photo shoot, and saved a lot of time and hassle. “I got all the content I needed that one day, so there was no scrambling later.”

Offline spend for the campaign was way higher than online, Bernard recalls, and included ad buys with CTV, and the cost of the in-mall photo shoot.

But it was the online campaign that delivered the most impressive results.

Santamaria highlighted some of these. Over four weeks of voting, she said, there were:

“We stopped counting after this, as it was impossible to keep track of all campaign-related interactions on various social media sites — including some we didn’t know existed.”

The support Oxford Properties’ management was crucial to the success of the program, according to Bernard.

She noted that in many organizations senior execs aren’t really sold on the notion of a social media-driven campaign. “They think it’s all about  people wasting time on activities that don’t generate any revenue.”

So Bernard came up with a creative way to engage mall management in the campaign.

“I organized a luncheon with our management and got them to vote on whom they thought would be the person representing Yorkdale. This got them so excited — every day they would ask whether their person was selected as the people’s choice winner.” 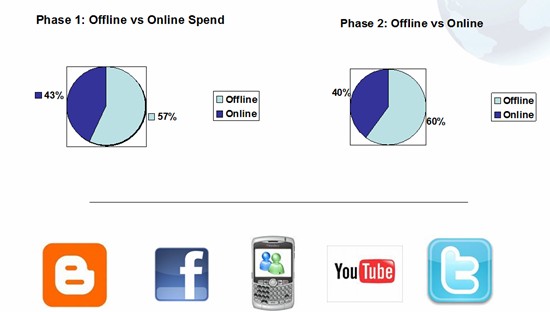 The campaign was also a great exercise in effective project management, Bernard noted.

“There were just three of us handling the entire campaign and dealing with multiple agencies that we used to help us with the project.”

A smart division of labour helped this three-person accomplish a whole lot, she said.

One big accomplishment, she said, was getting all the agencies to work harmoniously  together to create a contest that presented a cohesive message.

Joaquim P. Menezes
Previous articleWhy IT should love – and listen to – end users
Next articleNew ING Direct app lets you do your banking from BlackBerry, iPhone