In today’s camera-saturated world Big Brother really is watching most of the time, and it’s John Sandeman’s job to make sure no captured criminal’s evidence falls into a blind spot of the law.

The manager for Toronto Police Service’s video services unit used to do that by recording video to VHS tape and DVD. Police video from interviews and surveillance camera footage from apartment buildings, banks, ABM machines, convenience stores, etc. is copied to the medium, labeled with a barcode and stored in a central repository at headquarters.

The number of sources of video and the sheer hours of footage being collected is increasingly rapidly, Sandeman says. 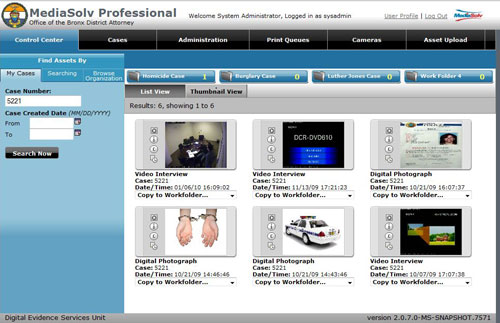 “It’s pretty hard for a criminal to not be caught on camera,” he says. “The challenge for us over the years is that the more video increases in the private sector, the more we have to manage.”

So the Toronto Police is shifting from physical storage to digital storage with digital evidence asset management software from Herndon, Va.-based MediaSolv Corp. The same database system is used by several American police departments, including the Washington DC Metropolitan Police Department, and Chicago PD. But the Toronto force will be the first in Canada to roll out this system.

Build a video surveillance system for as little as $250

Officers access the MediaSolv system securely and can search meta data to quickly find video evidence relating to a case. Evidence can be compiled and burned to a DVD to be presented in court and assist with a prosecution.

Newly installed touch panels at police stations can be used to quickly access and play back video. The screens are mounted to the wall with an articulated arm, explains Jim Weaver, CEO of MediaSolv. 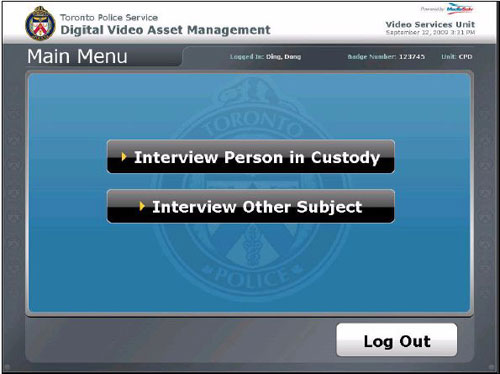 “You’ve got your log-in screens, your stop and start video screens, your update meta data screen with a virtual keyboard,” he lists off the features. “It really has simplified the navigation in our system.”

Cameras installed in video interview rooms will record directly to the new database. Officers will be able to review videos instantly and share them across division headquarters. Since Dec. 10 MediaSolv has been rolled out at Traffic Services, one west-end precinct, one east-end precinct, and a north-end precinct will go live next week.

The divisions expect to see a big-time savings in preparing evidence for criminal cases, Sandeman says. Ordering a DVD from the central repository could be a lengthy process.

“It’s ready to go to court right away and you don’t have to wait two or three weeks.”

“Rather than having it stored in some basement that you have to go to, you now have instant access to it,” Doherty says. “You can store an enormous amount of digital information in a very small space.” 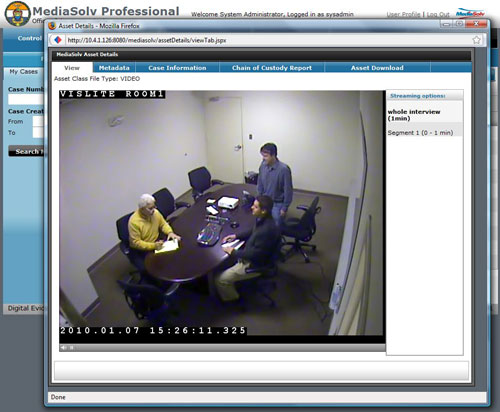 MediaSolv is capable of handling more than just video. It can also manage photos, documents, and audio recordings. The company’s aim is to simplify the way police departments manage evidence – compiling it into one system instead of a disparate collection of drawers, binders and shelves.

“It eliminates all of that stove piping,” Weaver says.

But the Toronto Police is only using it to manage video, and only from now on. There will be no effort to move older content stored on tapes and DVDs to the system.

The Canada Evidence act has a “best evidence rule” that demands the best-quality electronic documents available be used in court. Since transcoding a video requires some level of compression, it is not acceptable by that standard.

“If even one pixel is different, it wouldn’t be good enough for court,” Sandeman says. “The best evidence would obviously be the original evidence.”

MediaSolv helped the Toronto Police integrate the new database into its legacy evidence storage system. Officers searching for video will see results that are still stored on DVD. From the system, they can then request to view the DVD.

In future these videos may be loaded into the system for an officer’s reference, Sandeman says. But the original DVD or a copy would be presented as evidence in court.

The database is impenetrable by hackers because the Toronto Police uses a separate infrastructure for data communications between precincts. There’s no physical connection to the public Internet – effectively the most secure firewall possible.

To ensure digital evidence isn’t tampered with internally, MediaSolv includes a complete tracking and auditing feature. Each time a piece of evidence is accessed, the system records the instance and sends an e-mail report to the officer in charge of the evidence. It’s a digital chain of custody.

The auditing feature is a critical one to have because police evidence must have proven integrity, says James Quin, senior research analyst with Info-Tech Research Group. It also acts as a deterrent against tampering attempts.

“I’m going to get into trouble because they have this super-fantastic reporting mechanism that tracks what I do,” he says. “So why do it?”

A police officer would log into the system using a key fob and unique user name and password, Sandeman says.

MediaSolv also helps prove the integrity of new video files stored directly to the database. Just like suspects hauled into a police station, each file gets a “thumb print” to prove its authenticity.

“We use a verification process to confirm the video being shown in court is the original asset that was developed,” Weaver says.

Toronto Police did consider a couple software alternatives, Sandeman says. But in the end MediaSolv was the best fit because of its automated meta data creation and touch panel control screens.

MediaSolv is also helping to train officers on how to use the new system. Costs for the system include the professional services, legacy interface work, the hardware component and a licence fee for the application usage. An average rollout at a police department costs between $250,000 and $500,000.

After the initial roll-out phase, Toronto Police plan to start storing more video with MediaSolv and use more of its features, Sandeman says. The next project will be to store video from in-car cameras on the system. Currently, about 120 cars are outfitted with video cameras. The goal is to eventually have all 450 marked cruisers outfitted with cameras.

Down the road, Sandeman would also like to use a facial recognition feature. It identifies individuals if they’ve been booked before and brings up their name. That prevents a suspect from lying about his or her identity.