When developing creative for online ad campaigns, advertisers need to carefully consider the age and composition of their audience, an expert says.

She said a campaign that takes into account of these differences has a higher chance of being successful.

The Yahoo director spoke on the first day of Advertising Week 2010 in Toronto, a week-long event featuring thought leaders and experts from the advertising, marketing and communications sectors in Canada and abroad.

Among other things, Strawbridge’s group at Yahoo researches the ingredients of successful campaigns and shares these insights with Yahoo’s own communications team.  “We help them optimize campaigns, and show them how to be more effective in reaching their target audiences.”

Strawbridge shared the highlights of research she and her team had done in 2008 to determine the effect of three variables on people of different ages. They were:

Movement – Animated vs. static ads. Participants were exposed to a 15-second video, and then to a static ad of the last frame of the video, and their reactions recorded. “For this we used we used videos/images of the Toyota Prius and the Mercury Mariner – similar types of vehicles.”

Colour palette – The impact of three different types of colours – warm, cool and grey – on participants was recorded.

Border treatment – The study investigated whether the presence or absence of a border, and its configuration, affected participants’ reactions.

Every participant saw an example of each of these variables, Strawbridge said. “So, for example, everyone was shown an animated or a static ad, everyone saw one of the colour palettes, and one of the border treatments.”

She said the study tried to simulate as much as possible the real life context in which people would see such online ads. “So we didn’t show them the ad and ask them: what do you think about it? In fact, they didn’t know they were going to be reacting to ads at all.”

Instead participants were shown the Yahoo Finance page and told they needed to find some information on that page. “While they were doing this ‘distracter task’ – ads were presented to them.

The study measured certain participant traits and behaviours as these ads were served to them. They included: attention; emotional engagement; memory retention persuasion, awareness and novelty.

And it wasn’t the participants who talked about their experiences. 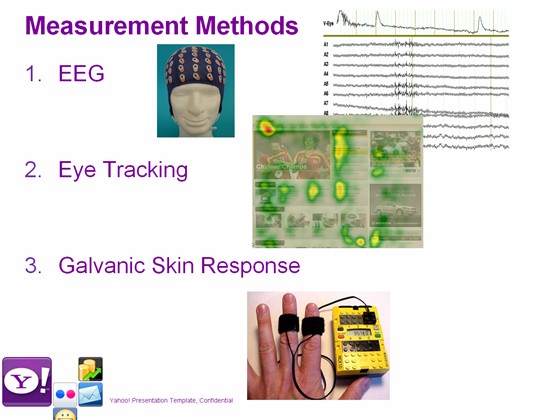 To get at that, Strawbridge said, researchers used three “objective” measurement techniques:

“We pulled all these three measures together and tried to understand the pattern they were painting … in concert,” Strawbridge said.

She said this closely mimicked the process of someone actually visiting a Web site. “They’re not usually going there to look for ads, they’re going to look for information.

So the question is: are there attributes about ads that really draw your attention to them, get you to read them and respond to them while you’re doing something else.“ 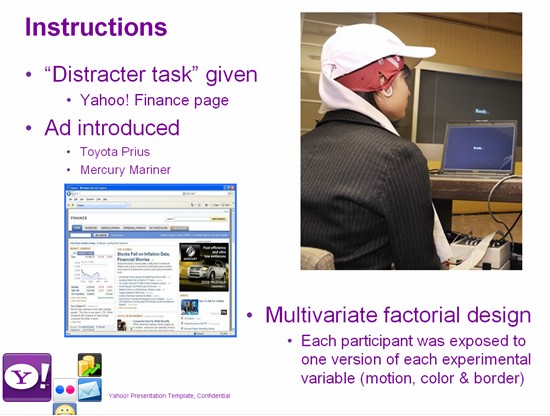 While the research project was conducted in the Bay Area of California, participants were selected from a variety of occupations.

“We made sure they weren’t just techies,” Strawbridge said. “Each audience segment we tested had 12 men and 12 women.”

A key finding was that among the Baby Boomers – people between around 48 and 65 years – reactions varied very little across any of the variables measured.

“For instance, there wasn’t much of a difference in how they responded to video ads versus static ads,” Strawbridge said. “Nor did their responses differ significantly across any of the three colour palettes used or any of the three borders.”

“This says to me that with boomers advertisers have a lot more flexibility, as these factors don’t seem to make much of a difference. Borders, no borders … knock yourself out! So, in a way, it frees up advertisers creatively to do much more.”

But she said, by contrast, the Gen Yers have very negative reactions to certain things.

For instance, when they see static ads you can very graphically see their emotional response drop off. “But video ads definitely worked well for them. For boomers – video or no video – doesn’t really matter.”

She said these findings could have huge implications for companies launching expensive campaigns.

“For instance, if your target audience is boomers, you may not need to use the most expensive creative to appeal to them. And if video is going to break your budget then it probably isn’t worth using video.”

In the industry, she noted, there’s an assumption that video ads are far more effective. “In fact we found they were slightly more effective for boomers but not a lot – and probably not worth the added cost.”

However, the research showed that Gen Yers responded much more favourably to dynamic ads.

“So to attract Gen Yers, you want to strongly consider rich media ads,” Strawbridge said. “Get your most important messages up front before they multitask and on to something else, and limit the length of these messages to about 15 seconds.”

How to make your SMB Web site accessible quickly