Over the past few years, we’ve looked at a number of Sony’s Xperia series of smartphones and have always ranked them highly. Although they may not have had as high of a profile as the Samsungs and Apples of the phone world, they are always a good choice for business users, despite not reaching the heights of some of their competition due to minor issues. Also, features that are now more commonplace on this year’s crop of phones, such as element protection, were first popularized by Sony on its Xperias.

For 2016, Sony has taken a different tack, with the rising cost of smartphones in Canada due to our low dollar being partially responsible. Instead of focusing on its top-end “Z” series of phones (which includes the Z5 we looked at last year), it has released a new somewhat more affordable mid-range “X” series of phones. The Xperia X is the true mid-range device, priced at $550, but there is also a step up, the Xperia X Performance which bumps up the performance with a more powerful processor.

In this review, we take a look at the X Performance and read on to see why we think it’s one of the top smartphones for business users this year. 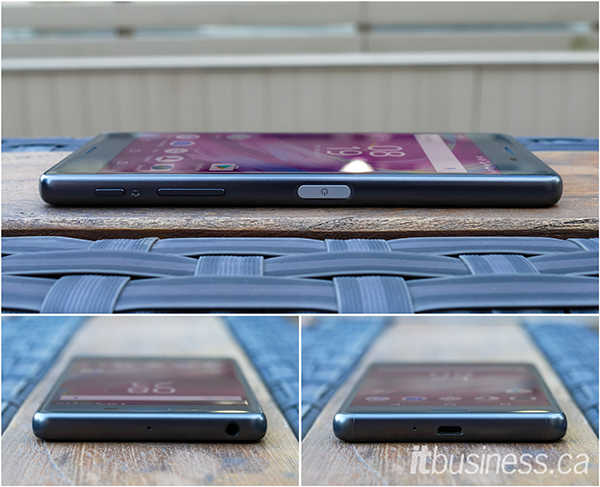 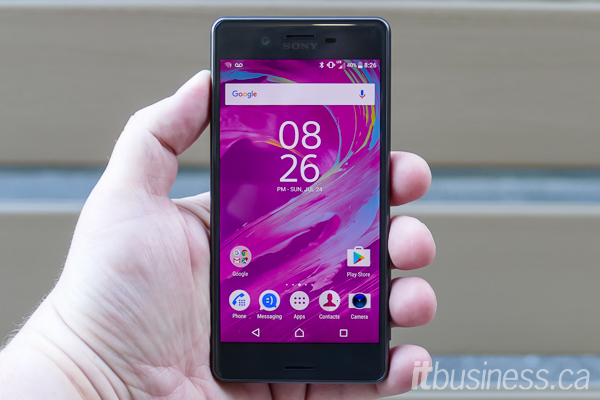 Even though the X series is new, the Xperia X Performance doesn’t stray too far from the attractive though perhaps a bit unadventurous look and feel of other Xperia phones. What has changed, when compared to the Xperia Z5 are some of the materials is use. As technically still a mid-range phone, despite the Performance moniker, the X has curved plastic sides instead of the metal found on the Z5. One big improvement, though, the that the glass back of the Z phones has been replaced by a brushed metal cover. Although the glass of the Z5 looked fantastic, after five minutes of use it was covered in unsightly fingerprints and was also fragile – glass shatters when dropped. This change to metal addresses this.

Along with the change to more plastic construction one of the step downs from the Z5 is a slightly smaller (5-inch vs. 5.2-inch) lower resolution (FHD vs. QHD) display. Although this could be considered a downgrade, the 1080p resolution on the smaller screen is still very sharp. Also, with most other flagship Android phones having much bigger screens, the X Performance is one of the few smaller flagship devices still available. It’s very bright, so is visible even in bright outdoor light and is covered with pleasing 2.5D Gorilla Glass.

Of the new X series phones, only the X Performance has the IP65 and IP68 element resistance found on the Z5 (and now competing devices like the Galaxy S7) but improves on its implementation. The SIM and microSD cards are now in a removable sealed tray, instead of being behind a tethered door (like the Z5) that could potentially break off and ruin the element resistance.

The X Performance has a fingerprint reader incorporated into the power button, which means a single press of it both wakes the phone and logs you in securely, a great feature for business users. Last year, we found the same feature on the Z5 temperamental, sometimes not registering your finger properly. This has thankfully been fixed on the X Performance. The phone, like previous Xperias, also supports a lot of LTE bands, an impressive 19 in total at Cat. 9 LTE speeds, which means global business travelers will likely be covered anywhere they go.

Being equipped with a top-of-the-range Snapdragon 820 SoC means that the Xperia X Performance certainly lives us to its name. The benchmark results above show that it easily keeps up with the other leading smartphones of 2016. Interestingly, it’s not significantly faster than last year’s Xperia Z5, which shows that we have reached a point now where high-end smartphone performance is already so good, improvements year-over-year will likely be minimal. What has improved for 2016 is battery life, with all the phones we’ve tested so far besting their predecessors, and the X Performance is no exception, despite having a smaller battery than the Z5. 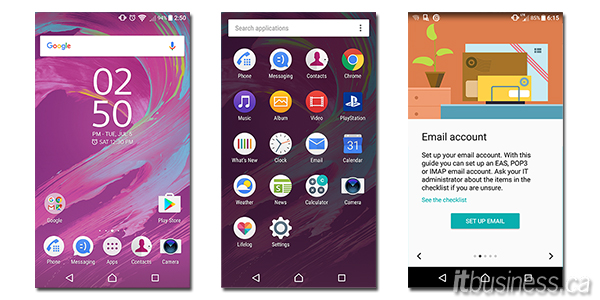 The X Performance runs Android 6.0.1 Marshmallow with same lightweight Sony UI as found on the Z5. It’s close to stock an Android experience, and the UI is very fast and snappy. You will still find a number of useful Sony applications, but not an overwhelming amount and Sony recognizes that the X Performance will likely be used by many businesses. Consequently, it fully supports Android for Work which can be used with leading mobile device management tools. It also has a useful setup wizard that takes a business users step by step through the process of enabling their phone for work.

The rear camera of the X Performance utilizes the same hardware as the Xperia Z5, but its overall photographic performance is still better than that phone, thanks to improved software and image processing by the Snapdragon 820 chip. It also has very fast Predictive Hybrid Autofocus that supports subject tracking. In the image below, we were able to keep the fast moving hockey players in focus using this feature. The X Performance’s 13MP front facing camera is a big step up from the 5MP of the Xperia Z5, and substantially better than what is found in its 2016 competition. 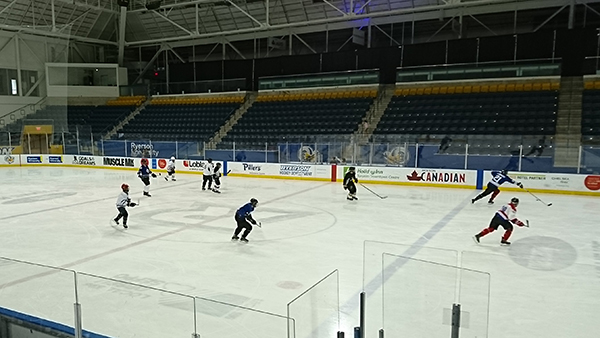 Although we don’t usually talk about the price being a big issue because after most of the top smartphones for business are flagships that one expects to be on the pricey side, the Xperia X Performance is supposed to be a mid-range device with some bumped up specs. At $700 outright, it’s more expensive that what Sony was offering the flagship Xperia Z5 for last year ($650). Yes, the drop in the value of the Canadian dollar plays a large part in this discrepancy, but with the X Performance having similar have some lower-end features (such as the 1080p display), one would hope it was the same price, or less even, that the still available Z5. Let’s not even talk about some of the even less expensive “premium” mid-range phones from Sony’s competitors.

The camera still suffers from the same low-light performance issues that affected the Z5, thanks to the continued lack of OIS (optical image stabilization). For some reason, 4K video recording is also disabled, despite the phone’s hardware fully supporting it. Although this isn’t an important feature for business users, it seems to be simply an arbitrary software limitation to fit the X Performance into a mid-range phone slot. There’s also quite a bit of software bloat, with a number of superfluous third party applications like Amazon Shopping, AVG anti-virus, Spotify and the usual useless carrier apps that should be left as optional downloads. 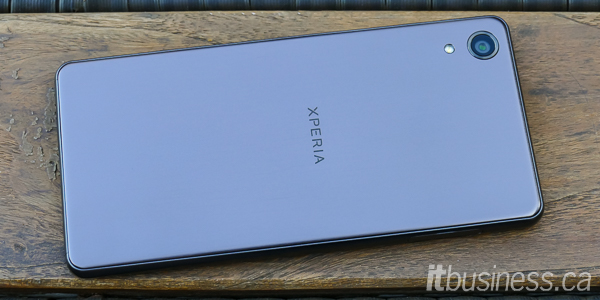 X marks the spot where Z used to be

Despite Sony’s Xperia phones not being nearly as popular as those put out by market leaders like Samsung and Apple, we have long had a soft spot for them and have liked every model we’ve looked at over the years, from the Xperia Z2 to last year’s excellent Z5. When Sony announced there wouldn’t be a new Xperia Z at the moment, with the Xperia X Performance fitting into that flagship slot, we didn’t know what to expect. Thankfully, despite it really being the mid-range Xperia X with a better Snapdragon 820 SoC, the Xperia Z Performance lives up to the standards of its predecessors, carrying over the Z5’s look-and-feel with more powerful internals. Our only major complaints are that low-light camera performance still hasn’t been improved and that the X Performance is more expensive that the still available Z5, even though nominally it’s a lower model.

Lows: Expensive when compared to its predecessor and other premium mid-range offerings, camera still lacks OIS and continues to perform poorly in comparison to its peers in low light, no 4K video recording,