Last year when we looked at Samsung’s 2015 flagship phone, the Galaxy S6, we called it a “smartphone magnum opus.” After years of making good, but not great, phones, Samsung stepped up to the plate and delivered a glass and metal masterpiece. How are they going to top that in 2016?

Well, at first glance, the new Galaxy S7 doesn’t look to be significantly different than the S6. It’s not the huge jump that was from the all-plastic Galaxy S5 to its successor. But don’t be fooled, this isn’t just a spec-bumped, faster version of 2015’s model – Samsung has taken many of the criticisms of the S6 to heart and refined the entire package, making the S7 even better, a Magnum Opus 2 if you will.

The Galaxy S7 is available now on nearly every Canadian carrier and read on to see why we think it’s one of 2016’s best smartphones for business users. 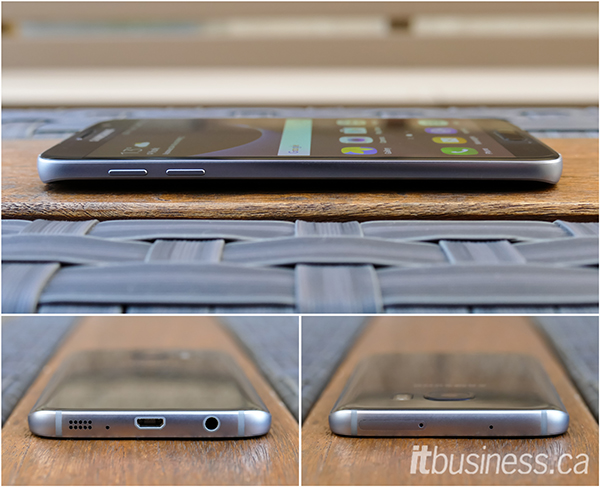 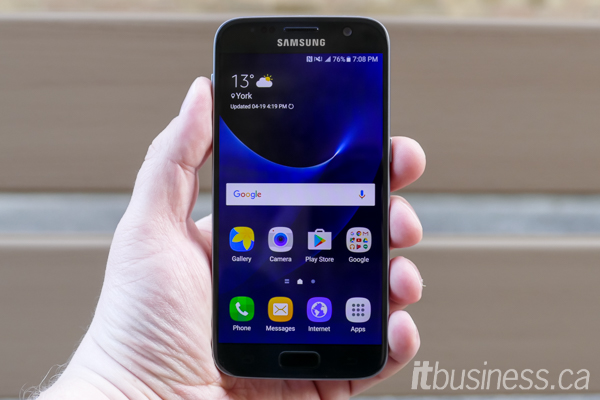 In 2015, Samsung made a big change when it ditched the plastic and started using premium materials in the design of its flagship phones, and the S7 continues that trend. While still sporting the same glass back and metal sides, this new model is even more attractive, taking design cues from the larger Galaxy Note 5. The back now has curved edges making it more comfortable to hold than the S6 was.

The home button/fingerprint reader below the screen has changed in shape, so there is more surface area for your finger to cover, making scanning for your print more accurate and even faster than on the S6. It also blends in more with the front because it doesn’t have a chrome edge anymore. This reader is going to be useful when using Samsung’s Pay mobile payment solution (that is confirmed to be coming to Canada later this year). 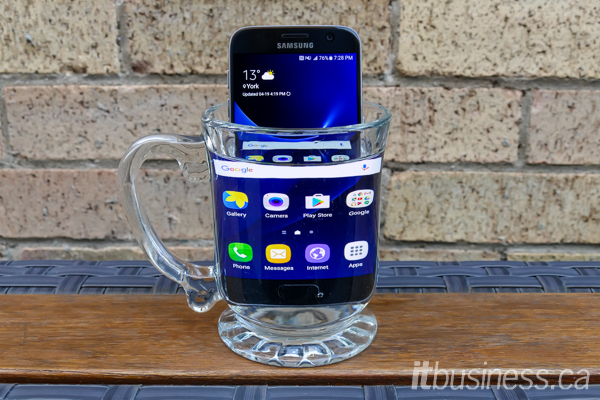 One of our criticisms last year was that Samsung wasn’t offering any element protection on its devices, a very beneficial feature Sony has included on its phones for years. With S7, Samsung has not only added IP68 water and dust resistance but done so without having to use any port covers. Although its screen size and specifications haven’t changed from the S6 (and it’s still one of the best we’ve seen) the front of the S7 now has attractive rounded edges. Also, there’s a helpful new always-on feature where the time and minimal notification icons are always displayed on the screen.

Compared to the S6, internal specification wise the S7 has more RAM and a faster SoC — the new Octo-core Samsung Exynos 8890 which has four 2.3 GHz CPU cores for demanding tasks and four running at 1.58 GHz. The use of the slower cores for lighter workloads reduces energy consumption, helping with battery life. This year we see the welcome return of a microSD slot to the S7, with this feature’s absence on the S6 being one of our complaints last year.

Performance wise, the S7 is naturally faster than the S6 and other 2015 phones, but with modern smartphones already being so quick, this improvement isn’t noticeable when using it. What has improved significantly is battery life, another disappointment of last year’s model. Samsung has upped the battery to 3,000 mAh, a 17.65 per cent increase over the S6’s 2,550 mAh, which has resulted in a slightly thicker device.

It’s worth it, though – 2015’s smartphones all regressed in this one key area compared to the previous year’s models, so it’s good to see a Galaxy S phone with good battery life again. Keep in mind our battery life test keeps the screen on continuously, so in the real world, you can expect 12 – 14 hours of use from the S7. 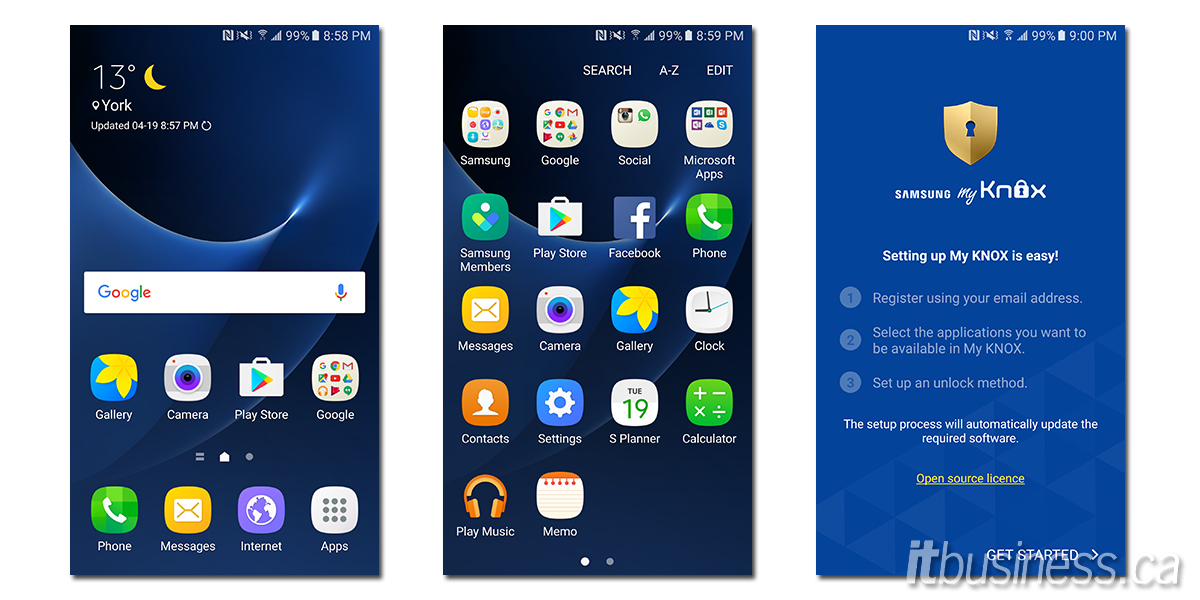 The Galaxy S7 runs Android Marshmallow 6.0.1, which includes security improvements, such as a new permissions system that lets you have greater control over what aspects of your phone applications can have access to. Google’s OS is, of course, skinned with Samsung’s TouchWiz UI, which last year finally reached a point where we didn’t wish we were using stock Android.

By default, the S7 is now encrypted and has Samsung’s Enterprise Knox management and security features for using it as an enterprise device. IT departments can manage the S7 with any of the leading mobile device management (MDM) solutions available. For small businesses and professionals looking to secure their S7 without needing an MDM tool, Samsung has free “My KNOX” software you can download from the Play store. With it, you can manage the S7 using Samsung’s “my KNOX” user portal.

The narrative of this review then is that the Galaxy S7 improves on the already excellent S6, and when it comes to the camera, it’s the same story. This year, Samsung has opted to go with a lower megapixel sensor (12 MP vs. the 16 MP of the S6) so as to have larger 1.4?m pixels for even better low light performance, combined with even brighter f/1.7 optics and OIS (optical image stabilization).

This sensor also has new “Dual Pixel” autofocus technology, improved phase-detection autofocus for even faster focus. The S7’s camera is lightning-fast in all lighting conditions, and its auto mode takes excellent pictures 99.99 per cent of the time. For more advanced photographers the S7 has a Pro Mode for full manual control over the camera too. 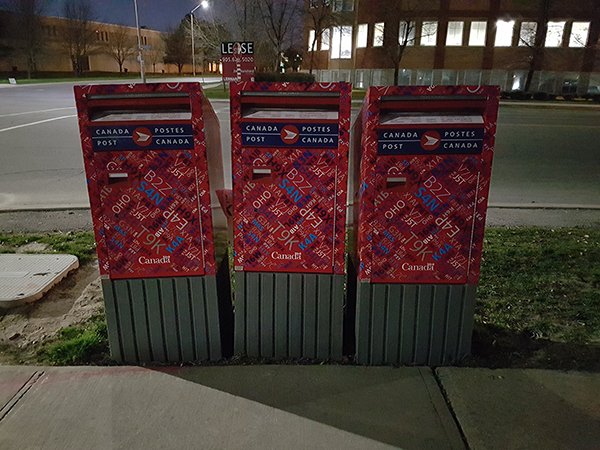 To be honest, not much! Because Samsung improved many of the things we didn’t like about the Galaxy S6, it’s hard to find fault in the S7. Yes, by today’s standards it might be a little small, but if you are looking for a larger S7, there is the new S7 edge model (which we’ll also be reviewing). It also still uses micro USB for charging, instead of the new USB Type-C standard, but the reason for this is so as not to break compatibility with existing peripherals like the Gear VR virtual reality headset.

If we have to knock it for anything, it’s an issue we had with both the S6 and Note 5 – the glass back looks great, but is a fingerprint magnet that is less likely to survive a fall without any damage than a back made from a different material. The S7 is also very expensive outright in Canada, but this is more to do with the exchange rate rather than Samsung over pricing it. 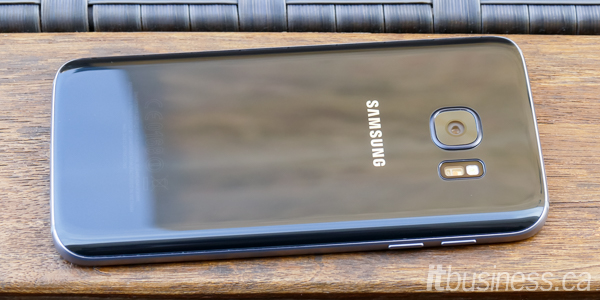 The best just got better

We said that the Galaxy S6 was the best Android phone you could buy in 2015, and we are saying it again for the S7. What impressed us most is that Samsung didn’t just make a faster S6 for 2016, they address all its shortcomings while improving on what made it great. If you need a new smartphone for work, the Galaxy S7 should be at the top of your shopping list.

On Tuesday, the emergency 911 service was down for...
Marketing

As Co-Founder and Chief Operating Officer at Madison Logic,...