The new Nokia Lumia 830 is the latest Windows Phone to come to Canada and has been dubbed by Microsoft Corp. as its ‘affordable flagship.’

It is the first device to ship with the new Lumia ‘Denim’ update that adds a number of unique features. Also, Microsoft’s mobile voice assistant Cortana is finally available in Canada on the Lumia 830.

The release of the Lumia 830 marks an end of an era. It will be the last Nokia-branded Windows Phone – Microsoft just announced the Lumia 535, the first to be branded as a ‘Microsoft’ Lumia device. Let’s see if the Lumia 830 ends the Nokia smartphone line with a whimper or a bang. 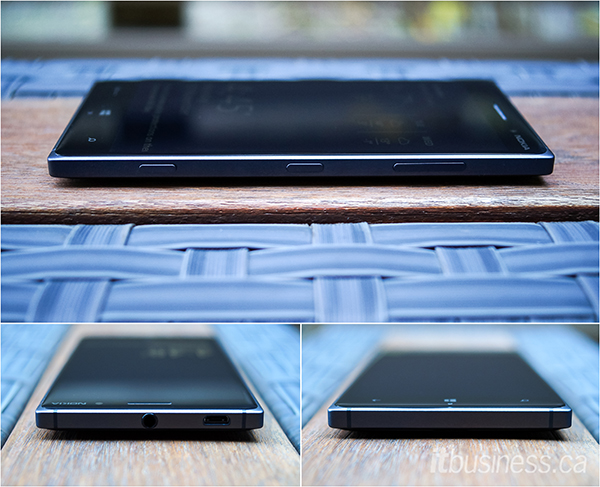 The Lumia 830 is a great looking phone – in our opinion one of the nicest looking of the current crop of smartphones. It has a metal chassis with metal buttons (including a camera shutter button) and a removable plastic back, and certainly looks like a flagship device. There are two different colour options available in Canada. The Rogers model has aluminum coloured metal on the sides with a white plastic back and an optional green back in the box. The model offered by Bell and Telus (the one we tested) has darker gunmetal coloured sides and black plastic back. 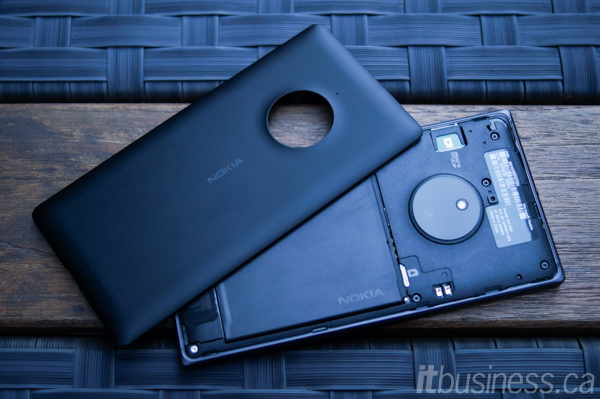 Size wise the Lumia 830 is nice and compact for a 5-inch phone, with minimal bezel space surrounding the screen. It is just a tad bigger than the Nexus 5 and iPhone, 6 and quite a bit smaller than some other phones with the same screen size like the HTC One M8.

One strange design decision is that the USB port is located at the top of the phone next to the headphone jack, making it awkward to use when plugged in.

The Lumia 830 has a 720p IPS screen with excellent viewing angles. The edges of the screen are also curved to attractively blend into the metal sides of the phone. It has great contrast with deep blacks thanks to Nokia’s ClearBlack technology. However, as a 5-inch HD screen it only has a PPI of 296. This is not nearly as crisp as competing phones with 1080p 5-inch displays, though the nature of Windows Phone’s UI makes it less noticeable. The screen is reasonably bright, with a maximum output of 325 nits, and it also has a sunlight setting to improve readability outdoors. 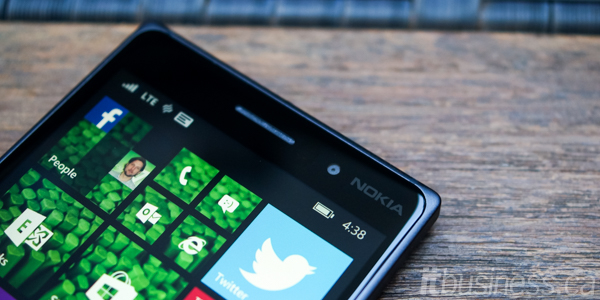 Despite Microsoft calling it a flagship device, the Lumia 830 is still really a mid-range phone, so only has average hardware specs. Yet its 1.2 GHz quad-core Snapdragon 400 SoC is powerful enough to make moving around the Windows Phone UI and apps a smooth and pleasant experience. It also helps that Windows Phone is optimized to run just as smoothly on low-end hardware as high-end, unlike some other mobile OSes.

However, it is a little under-powered when it comes to running more demanding apps that can take a little longer to open that they should. For the same outright price, there are other phones with more powerful specifications — it would have been nice if Microsoft had equipped the 830 with slightly more powerful internals. It does have 16 GB of storage and a microSD slot, which allows for up to an additional 128 GB of storage.

Since there are not that many cross-platform benchmarks, we were only able to use the two shown above to compare the Lumia 830 to other phones. As you can see its performance compares to the similar spec’d Moto G (2014), but does pale in comparison to some other phones currently sold at similar prices.

The 2,200 mAh removable battery in the Lumia 830 is claimed by Microsoft to give up to 14 hours of continuous web browsing and up to 10 hours of continuous video. While we were not able to formally test these battery life claims with any of our testing tools, Windows Phone has always been one of the more power-efficient mobile OSes, so they sound plausible. From our time using it, we did find that that Lumia 830 easily lasted a full business day and then some. 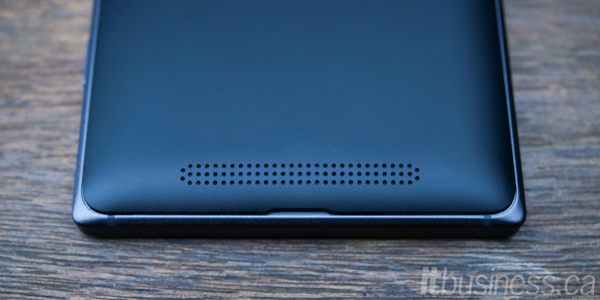 The Lumia 830 supports Cat 4 LTE and is capable of connecting to Bell and Rogers at 150 Mbps. The Telus network only goes up to 75 Mbps. However, in real-world conditions do not expect to get more than 50 – 60 Mbps on average. It has five bands of LTE connectivity suitable for North American use, but not enough to make it a world traveller.

The 830’s rear-facing speaker has a decent amount of volume but doesn’t sound particularly good. There isn’t much bass, and at higher volumes there is lots of distortion. It is adequate for speakerphone use. When you use headphones, the audio sounds a lot better, and there is a built-in equalizer in the settings that lets you further tune the audio. Call quality was very good when using the 830 on the Telus network. 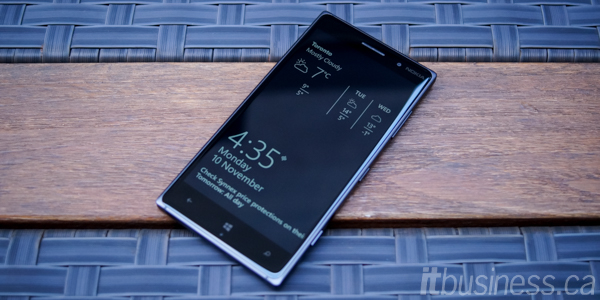 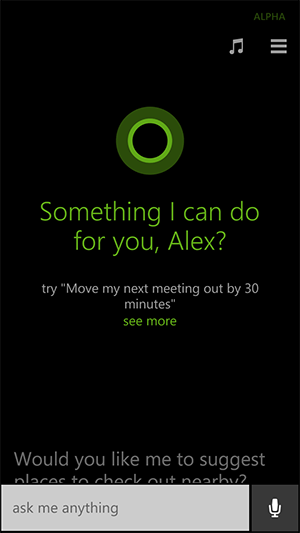 Last year Nokia introduced Glance Screen (shown in the picture above is) that shows a limited set of info on the screen even when the phone is in standby. This is an exclusive feature of Lumia Windows Phones. The Glance Screen shows the time, date and notifications such as upcoming appointments. The 830’s Denim update also adds the ability to display info like the weather and other apps on the Glance Screen too. This feature is very useful when you need to just quickly peek at the phone for a second to see the time or when your next meeting is.

Cortana is Microsoft’s answer to Google Now and Apple’s Siri. It claims that she is the “most personal digital assistant on the market,” and up until now has only been fully available in the US. Canadians now have access to her on the Lumia 830. You can either speak or type a query using natural language, and Cortana will give you an answer or search Bing for one. You can also use her to set reminders, take notes and make calls. However, since Cortana is still in alpha in Canada, some of the localization features like traffic updates are missing. 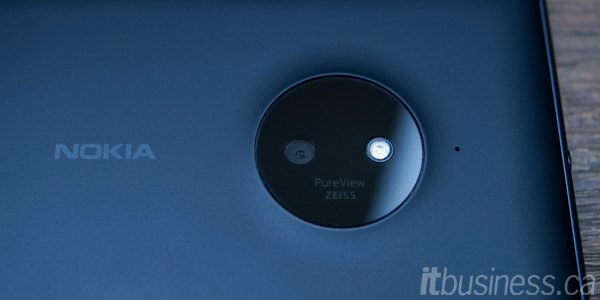 The Lumia 830 has a 10 MP camera with a Carl Zeiss lens and uses Nokia’s PureView technology which is supposed to improve image quality. While not in the same class of cameras found on higher-end phones its performance is still decent for a mid-range device. The small sensor size does impact the camera’s low light performance, but this is partially made up for by it having optical image stabilization (OIS). 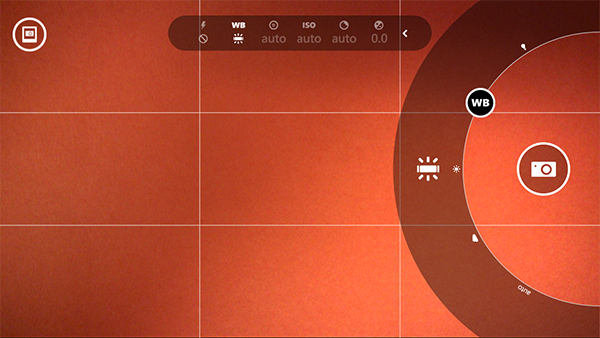 Nokia’s Camera UI still one of the best out there – it is easy to shoot in Auto mode, yet you can quickly access full manual settings in Pro mode. Unlike other mobile cameras, there aren’t any other modes pre-installed. Instead, there are ‘lenses’ you can download that function as additional modes. For business users ‘Office Lens’ is very useful. It lets you take pictures of something like a whiteboard or document, even on an angle, and it fixes the image to be more readable then saves it to OneNote. Strangely there is no HDR mode, something found on nearly every other smartphone camera.

The sample images below show its performance in daylight, indoors and at night. 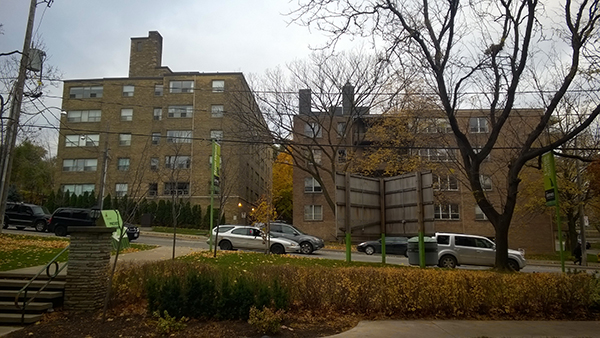 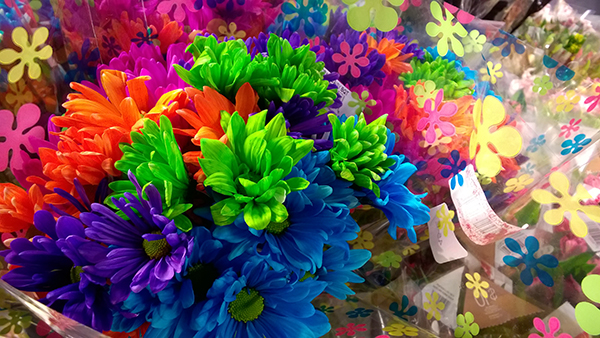 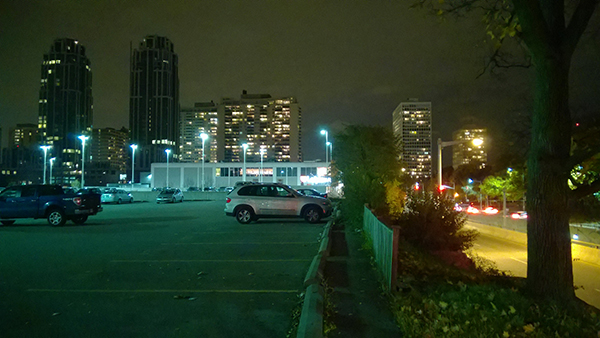 The Lumia 830 has fast focus and shot to shot speed, but the camera app does take a little too long to initially open. Also, Auto mode does have some issues with setting the correct white balance, especially in lower light, but you can fix this by setting it manually. There is an upcoming ‘Lumia Camera’ app update which will add HDR, improve app speed and hopefully address the other issues with the 830’s camera.

The 830 does shoot good quality 1080p 30fps video in good light, and the OIS helps keep everything nice a steady even if you are moving around while shooting. 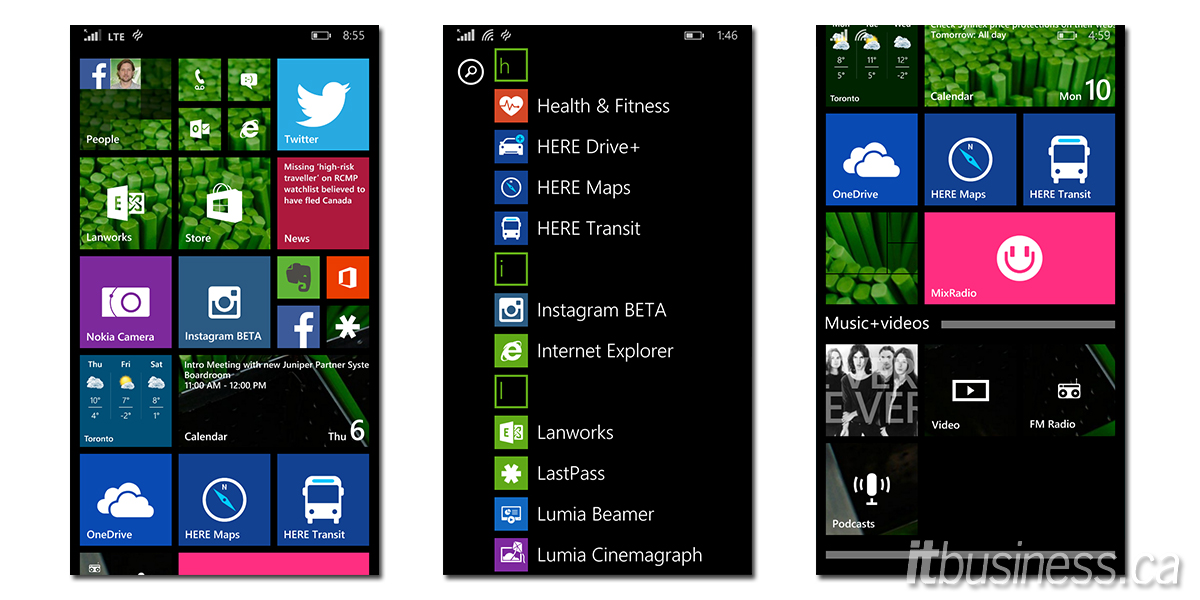 Windows Phone 8.1 added Cortana, which we detailed above, more Live Tile size and layout options, and a pull-down ‘action centre’ that displays all your notifications similar to the way Android does. The already excellent Windows Phone keyboard also has a new Swype-like input mode called ‘shape writing.’ In addition the Update 1 version of 8.1 now adds folder support to the home screen (shown in the third screenshot above). This allows you to pin even more application shortcuts to the home screen without it becoming a cluttered mess.

While all these new features and updates now make the core Windows Phone experience just as good as Android and iOS, the one question that remains is the application situation. We can say that Windows Phone is now in the best position it has ever been. Out of the box the Lumia 830 comes packed with Nokia and Microsoft applications, like HERE Drive, Maps, and Transit.

On the third-party app front, most of the headliners like Instagram, Spotify, Fitbit and more are now available for Windows Phone. However, all of Google’s applications, both personal and work related, are still conspicuously absent from the OS, which is frustrating. Also, one drawback to using Windows Phone is that most third-party apps lag behind feature-wise when compared to the versions on iOS and Android. 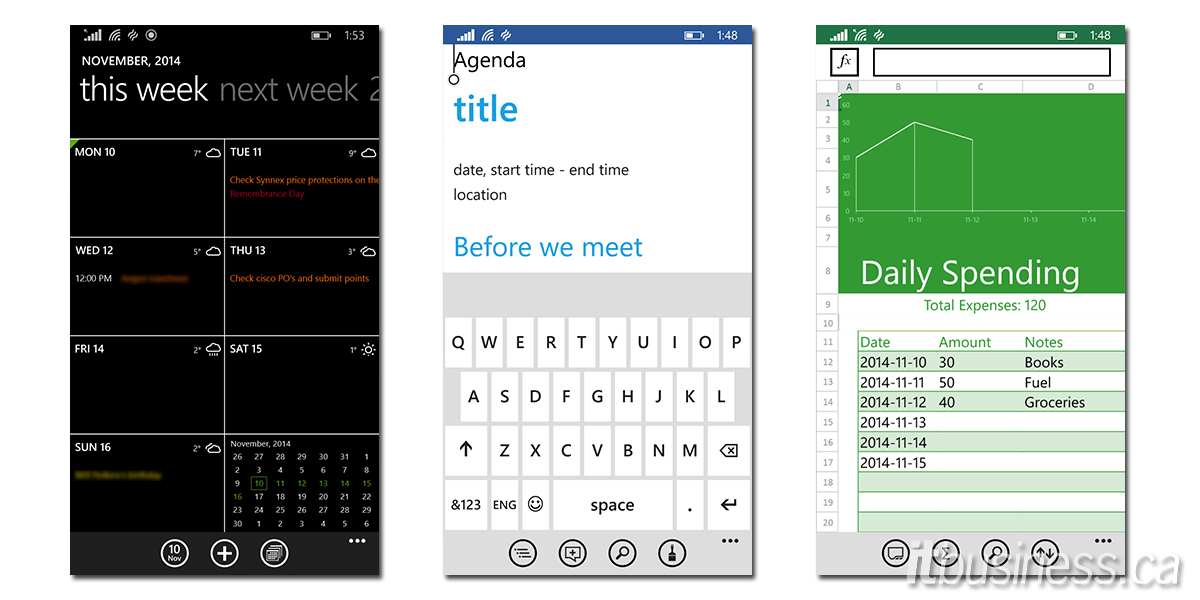 There is one caveat about the Lumia 830 for business users – if your organization uses Google Apps, then Windows Phone probably isn’t the right mobile OS for you. However, if your company, like the majority in Canada, runs on Microsoft, then the 830 is a great choice.

The Lumia 830 comes with the standard calendar, contact management and email applications, and all of them are well designed and work very well. The calendar application received a major update in Windows Phone 8.1 with new ‘interactive views’ that let you tap a day to expand it to a larger detailed view on the main calendar screen. 8.1 also added VPN support and S/MIME, which adds an additional layer of security for Exchange Active Sync (EAS) email.

For productivity apps, the Lumia comes with Office, which allows you to view and edit Word, Excel and PowerPoint files. For the majority of business users, this will be fine, but as mentioned we wish Google and Microsoft could work out their differences and get Google Drive, Docs, Sheets and Slides onto Windows Phone.

From a device management and security standpoint, if you plan on using the Lumia 830 as a business phone, there are quite a few management options. At the most basic level, EAS policies can be used to perform basic mobile device management (MDM) tasks. For more advanced MDM features you can use tools like Microsoft’s cloud-based Intune, Microsoft System Center 2012 R2 Configuration Manager or a third-party solution like AirWatch. 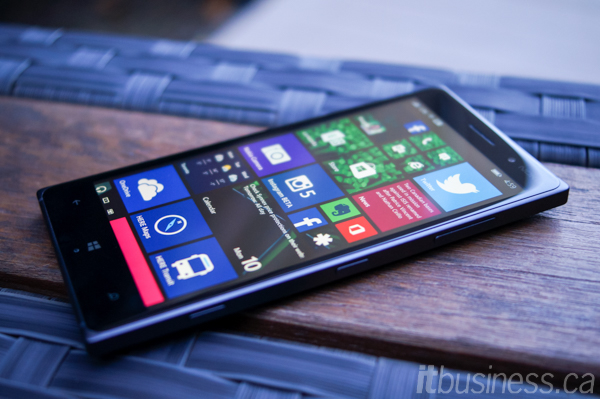 The Nokia Lumia 830 lives up to the claim of it being an ‘affordable flagship’ and is a fitting end to the Nokia nameplate. It is well designed, decently spec’d for its price and runs the absolute latest version of Windows Phone 8.1. What’s more, the Windows Phone OS itself has improved leaps-and-bounds, and it now quite comparable to the market leaders Android and iOS. For business users looking for a new smartphone, the Lumia 830 should certainly be considered.

Alex Davieshttp://www.artofthegadget.com
IT professional & freelance tech writer. Founder of The Art of the Gadget. PC gamer, indie comics fan & cinephile. Sometimes curmudgeon.
Previous articleHere’s a new virtual reality device – but this one isn’t for gaming
Next articleVines are a ‘marketing baptism by fire’