It’s too bad the late George Carlin never updated his classic ’70s comedy monologue “A place for my stuff” for the Digital Age. Here’s how I imagine it would’ve gone:

That’s all your monitor is: a place to keep your app windows and browser tabs open …

Sometimes you gotta get another monitor. Why? No room for your apps anymore.

I myself have three displays adorning my desktop. On the left: A 19-in. Dell CRT on which I keep open a minimum of a dozen Firefox tabs at any given time. In the middle: A 19-in. ViewSonic LCD on which I take notes and write articles in Word, read PDF and Excel attachments, and watch Windows Media files. On the right: The 15-in. LCD screen of my ThinkPad T42, on which I do e-mail and IM chat.

Unlike buying a McMansion, boosting your on-screen real estate is more than an exercise in wasteful vanity — it boosts productivity. This theory (which I subscribe to) is prominently championed by blogger Jeff Atwood: When it comes to on-screen real estate, multiple smaller parcels are more efficient than a single large one.

“Instead of wasting time sizing, moving and z-ordering windows, users only need to deal with one maximized window at a time,” Atwood wrote in an aptly named entry, The Large Display Paradox, last year. “They can flip between maximized applications in much the same way they change channels on the television.”

Or to go back to Carlin: For holding your stuff, several smaller bags are better than one huge sack.

The clincher for me is that opting for several smaller monitors over a single monster one is significantly cheaper. A brand-name 28-in. LCD — which, in my opinion, is the equivalent to a pair of 19-in. displays — starts at $500. But you can replicate my dual 19-in. monitor setup (assuming you’ve already got the notebook) from scratch for about $230, and users willing to tolerate bulky CRTs may be able to assemble all this for about $100.

Here’s my guide to boosting on-screen real estate on the cheap. 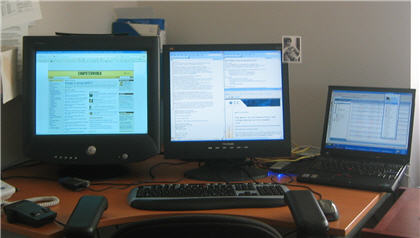 Step 1: Get your monitors.

LCD prices may not be plummeting like they were several years ago, but they are still dropping. As of early July, 19-in. LCDs from respected names such as ViewSonic and NEC went for less than $150 online.

My local Fry’s had an even cheaper deal: a 19-in. widescreen LCD from the lesser-known Tyris for $120, after the $30 mail-in rebate (with a free Canon inkjet printer thrown in, too).

While LCD prices are falling, prices for used CRTs are falling off the cliff. In most large U.S. metropolitan areas, you should be able to find a 19-in. CRT in good condition on Craigslist for free.

In Seattle in the past year, I’ve found a 17-in. Sony Trinitron with a fairly bright, sharp picture; a 19-in. Sony Trinitron (which turned out, alas, to have a failing tube); and a 19-in. Dell flat-screen CRT, which offers a very sharp and pretty bright display. In each case, the owner was overjoyed not to have to haul the 60-pound sucker down to a recycling center and pay to junk it.

If you aren’t having any luck, try extending your search to 17-in. CRTs or to 19-inchers going for $25 or less. With some bargaining, you might be able to get it for next to nothing. If you’re still having problems, try checking with a recycling center. They often have a supply of tested, working monitors destined for reuse. Or check on Craigslist again after the school year begins and ends, or after Christmas, as these are popular times for consumers to upgrade.

Of course, you may not want to bother with CRTs at all. In his article Extreme energy makeover: Home office edition, my colleague Rob Mitchell dumped his 19-in. CRT for a same-sized LCD because the latter used one-third the electricity, thus reducing his ongoing carbon footprint.

Sounds good. But, as Mitchell also noted, that 60-watt difference only resulted in an annual dollar savings of $18. My view is that, by going with a free CRT, you save at least $120 right away, which would take almost seven years to make up with an LCD. And keeping a perfectly functional CRT out of the landfill for several more years has got to cut your carbon footprint more than buying a new LCD, however energy-efficient.

One gadget you might consider if you go with a CRT is Belkin’s new $50 Conserve power strip, which lets you shut off plugged-in gadgets via remote control so that they don’t drain power when in standby mode.

Step 2: Hook up the monitors.

Until several years ago, running multiple monitors usually required a desktop PC equipped with a video card for each additional monitor. If you had a notebook, the best you could do is connect it to a single external monitor.

The big caveat with the DualHead2Go (which costs between $160 and $210 online, depending on whether you get the analog or digital version), and the even more ambitious TripleHead2Go (which costs between $250 and $300, minimum), is that both products actually create one ultrawide desktop that spans two or three monitors. Users can split up the desktop into smaller windows using Matrox’s PowerDesk software. But it appeared to me to be a somewhat kludgy solution that adds extra steps.

All cost $100 or less and let you add a single monitor each. Many use chip technology and software from DisplayLink, which is rapidly emerging as the standard for this technology on the Windows side. DisplayLink has also released a beta driver that should enable any of its partners’ products to work with Intel Macs running Mac OS X.

As for me — while Iogear’s product is not the cheapest of the three listed above (at a list price of $99.95), I was so impressed with the demo version that I went out and bought my own online for $70. 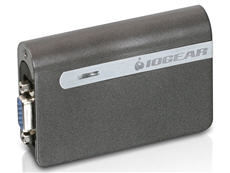 Smaller than the proverbial pack of cards, the Iogear nevertheless does a flicker-free job of powering my Dell CRT at 1280 x 1024 resolution and 32-bit color. Watching YouTube videos or DVD movies is rarely a problem, either. The only hiccups I encounter are ones I can also find on a single-screen setup, such as when I’ve got half-a-dozen apps open or the ThinkPad’s fan is running full blast.

Step 3: Take control of your monitors.

Most of the video adapters you choose will come with their own window management software. For example, DisplayLink Manager, which ships with the Iogear and many others, is competent at adjusting the settings of your various windows, and even has some rudimentary shortcuts.

But power users looking for more features will want to look elsewhere.

Realtime Soft’s UltraMon, the crème de la crème of multimonitor software, has two unique features: the ability to set hot keys for common commands and the ability to “remember” how big and where you like your application windows to open. UltraMon also lets you easily move windows from screen to screen, adjusting to changes in dimension, e.g., from a wide-screen monitor to a conventional 4:3 one.

UltraMon also lets you create different wallpapers and screensavers for each monitor. For power users, this $40 Swiss-made Windows utility is worth every penny. Note: It’s compatible with most video adapters with the glaring exception of the Matrox Dual/TripleHead2Go products.

MediaChance’s free MultiMonitor task bar is for users who don’t want to pay $40 and mainly want the ability to quickly send app windows from one monitor to the next.

DisplayFusion, from Binary Fortress, claims to offer nearly all of UltraMon’s features, apart from letting users preset how and where app windows open. It does allow users to search for and download images from Flickr for wallpaper purposes. DisplayFusion costs $10 for the full version and requires Microsoft’s .Net Framework 2.0.

There are other alternatives. You could consider a video-enabled laptop docking port, such as Lenovo’s Enhanced USB Port Replicator (prices ranging from $109 to $163), or Toshiba’s Dynadock (which runs around $135). These let you add an extra monitor along with half a dozen USB ports to any brand of laptop.

Or if you go by the theory that today’s 19-in. LCD is yesterday’s obsolete 15-incher, then you could opt for a single larger LCD today and plan to add a similar-sized one in the future. Of course, you’ll pay more: 28-in. LCDs start at $500, while Apple’s 30-in. Cinema Display, the Lexus of LCDs, costs about $1,800. With something that big, you can use utilities such as Microsoft’s Virtual Desktop Manager, which let you simulate multiple desktops on a single screen.

Still, I prefer my thriftily assembled trio of monitors. Am I always three times more productive than when I am working in a café on my lone laptop screen?

No, sometimes it just means I am procrastinating three times as much. But when deadlines rear their ugly head, there’s no place I’d rather be than in front of my triple-headed home office.